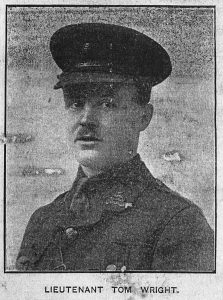 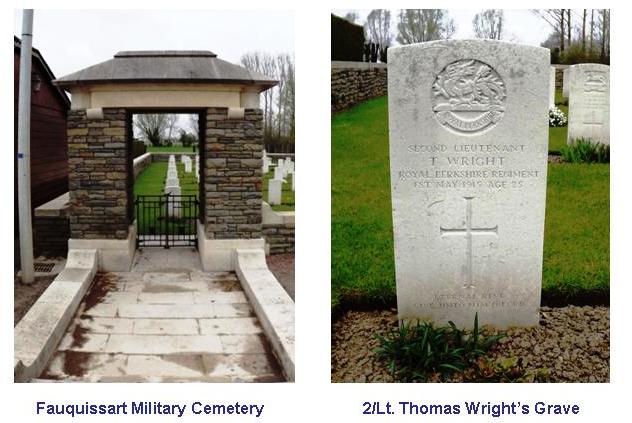 Thomas was born at ‘The Plough’, North Kyme, Lincolnshire on 6 July 1889 the eldest son of Stephen Thomas (Innkeeper and Farmer) and Agnes (née Christian) Wright. (1891 Census RG 12/2577) He had an elder sister, Mary Clare, and five younger siblings, Edith E., Stephen Charles (see below), Kathleen B., Elizabeth May and Louise Ellen. 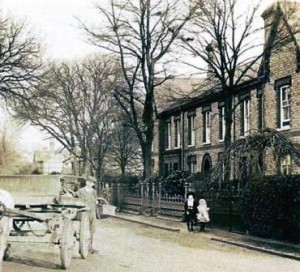 In 1901 (Census RG 13/3048) the family were living in Chestnut Street, Ruskington, and ten years later the 1911 Census shows (RG 14/19618) three more children added to the family, Winifred Mable, Gilbert and Stephen John, and the family residing at The White House, Ruskington.

Thomas was educated at Christ’s Hospital School, Lincoln, and King’s College, London, where he gained a BSc and A.I.C. Thomas worked as a “Demonstrator in Chemistry”. 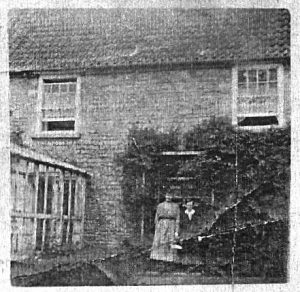 Footnote: Thomas’ parents remained in the village for the rest of their lives. Stephen Thomas died in May 1935, aged 79, and Agnes in November 1944, aged 80. They now lie in adjacent Graves 69 and 70 in the East Border of Ruskington Cemetery, Old Plot.

They were buried alongside Thomas’ younger sister, Elizabeth May, who was only 18 when she died in November 1915 and was buried in Grave 71. Other brother, Stephen Charles (see above) survived the War and after his death in September 1975, aged 82, he completed the family plot after his burial in Grave 72.

When War was declared Thomas was a Trooper in King Edward’s Horse (The King’s Overseas Dominions Regiment), a unit of the Special Reserve, but dating back to the formation as Imperial Yeomanry for the Second Boer War. He had joined the unit in February 1913. 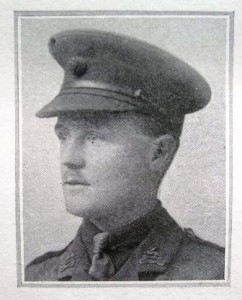 Thomas volunteered for active service and was offered a Commission in the Royal Berkshire Regiment, being Gazetted 2nd Lieutenant on 24 December 1914. [‘The London Gazette’ – 22 December 1914]

‘The Lincolnshire Chronicle’ [27 November 1915] reported that Thomas trained in Portsmouth and from there received orders to join the 2nd Battalion in France on 30 March 1915.

The 2nd Battalion were in Jhansi, India at the outbreak of War and returned to England, landing 22 October 1914.

The Battalion moved to Winchester and were placed under the command of 25th Brigade in 8th Division and on 4 November 1914 the Battalion was posted to France and landed at Le Havre the following day.

Thomas was killed in action on 2 May 1915, on his 33rd day in France, near Fauquissart, whilst on a reconnoitring patrol. His Commanding Officer, Major Richard Prentice Harvey [see below] wrote to Thomas’ father, at his home “White House, Ruskington”. His letter contains a very detailed account of the actions of the night Thomas was killed, and is reproduced below in its entirety:

“ It is with deep regret that I write to you regarding the gallant death of your son, 2nd Lieut. Wright, which occurred last night shortly after 10 p.m. in the neighbourhood of Fauquissart, near Laventie.

He was on duty in the trenches with his platoon and had taken out a Sergeant and a man to reconnoitre a trench half way between the opposing lines which at that particular point are some 300 yards apart. He discovered footmarks lately made leading to the enemy’s trench and saw two of them come in front of the breastwork, heard them speak and saw them throw up a Verey light and run back.

He returned to report this, the fact of the trench being used by the enemy being a matter of great importance.  This was about 8 p.m.

About 10 p.m. the Captain passed his dugout and had a chat – your son asked if another patrol was due out and his Captain told him one was starting but it was unnecessary for him to go out again.

This, however, was a duty he particularly liked and saying he was anxious to catch the enemy’s patrol, he asked permission to go, and was allowed.

Arriving at the trench he was peering in the darkness, both the Sergeant and himself  showing their heads above a flimsy parapet, he was suddenly seized with a fit of coughing which he smothered but told the Sergeant he must cough out. This he did when a Verey light shot up and a volley was fired into the trench. Three bullets struck your son through the head, heart and wrist. He fell dead without a sound. 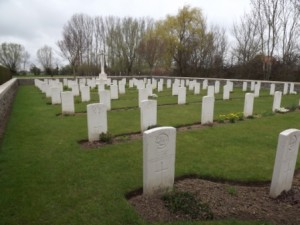 The Sergt. was unable to move him, but returned after bandaging his head. A brother subaltern, Mr Lipscombe [see below], and three men went out at once and one of the private soldiers placing your son on his back, carried him in.

He was brought down to headquarters by midnight and I went through the sad task of emptying his pockets of the various articles of private property, all of which will be returned to you.

Having trained your son at Portsmouth when he joined this Battalion, I can testify personally to the loss the Regt. has sustained in the death of a most promising young officer.  One who was always willing, quite reliable, and of a most placid and cool temperament in danger, with the N.C.O.s and men of his platoon he was deservedly popular and I am requested to accord you the deepest sympathy of all ranks.

I shall lay him to rest in the little cemetery of Fauquissart this evening where some 30 men of his Battalion lie. Four subalterns will be his pall bearers and the grave will be clearly marked. The Cemetery is on the north side of the Rue Tilleloy, 700 yards south west of the raised church. On sheet 36 Map 1:40000 the reading is M24a73.

May I be permitted to you my deepest sympathies which are of a personal nature as I knew your boy well. It may be of interest to you to know that his features were in no way disfigured and his expression is one of determination and happy peacefulness.

In these times we all possibly await a similar termination to our careers but the knowledge that ‘The Eternal God is our refuge and underneath are the everlasting arms’ fill us with hope and confidence in the great struggle.

We shall sing Hymn A.M. 264. I enclose a copy of the list of personal effects which with his kit will be sent home.“  [Hymn A.M. 264 is believed to be “God of mercy, God of grace, Show the brightness of Thy face“

The following day, 3 May, Thomas’ mother received another letter from a fellow Officer, who was also to pay the Supreme Sacrifice. The letter from 2nd Lt. Reginald C. Lewis [see below] gave much of the same details as the first letter, but added:

“….. we buried him yesterday with all the honour and respect due to a brave man of whom we were all proud. I was one of his pall bearers with three other Officers and the Commanding Officer read the burial service. He is buried in a little graveyard where there are a number of fallen Officers and men. The graves are well tended and planted with grass and flowers and have crosses with the name and regiment and ‘Killed in Action’ on them.

His will be well cared for, but should you wish any wreath or flowers sent out I should see that they were placed on his grave. Once again tending my sincerest sympathy.“

N.B. Major Richard Prentice HARVEY was killed in action near Fromelles just 8 days later, during the Battalion’s advance on Aubers Ridge. In the action where Major Harvey was killed on 9/10 May, the Battalion lost 90 Officers and men, almost all of whom have no known grave and are commemorated on the Ploegsteert Memorial.

N.B. Lieutenant Eric Lancelot LIPSCOMBE was one of those killed in action on the same day, 9th May 1915, during the Battalion’s advance on Aubers Ridge. He too has no known grave and is remembered on The Ploegsteert Memorial.

N.B. Captain Reginald Cameron LEWIS was killed in action on the first day of the Battle of the Somme, 1 July 1916, aged 27. He is buried in Ovillers Military Cemetery.

As stated above Thomas is buried in Grave F.1., Fauquissart Military Cemetery. The Battalion War Diary for the day simply says: ” In trenches at FAUQUISSART. 2 Lieut T. WRIGHT and 1 man killed. 5 men from hospital. ” (The other man killed on the day was Pt. 9425 Richard Newton Bracey, who lies alongside Thomas in Grave F.2.)

The following week ‘The Lincolnshire Chronicle‘, (8 May 1915) reporting Thomas’ death, included a synopsis of both letters received by his parents, and printed the photo shown at the top of this page.

In 1920 Edith Wright (Thomas’ sister), later Mrs Edith Bray, went to visit his grave and the photo-card right was sent by her to their mother. It is headed: “Laventie – Ruines de la Guerre.”

On 28 October 1916 ‘The Lincolnshire Chronicle‘ (p. 3) carried the following report:

“MEMORIAL TABLET During the morning service on Sunday, at the church of St. Mary’s, Sleaford, the Rev. Father Lieber blessed the tablet that had been erected to the memory of the late Lieut. Thomas Wright, who was the eldest son of Mr. and Mrs. Stephen Wright, White House, Ruskington, who was killed in action in France on May 2nd, 1915.” [See Footnote below]

However, the only R.C. Church in Sleaford is Our Lady of Good Counsel Roman Catholic Church, Jermyn Street, so “St Mary’s” must have been alternate name at that time. [Photo to follow …] 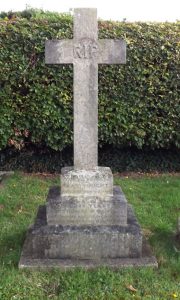 Thomas is also commemorated on the Grave of 18 year old May Wright, who died on 6 November 1916. [Grave 71 in the East Border of Ruskington Cemetery, Old Plot.]

This is the grave of his younger sister, Elizabeth May, as further inscription on the headstone adds: “Dearly loved children of Stephen and Agnes Wright. ” [Stephen and Agnes were later buried alongside, in Graves 69 & 70 – see above.] 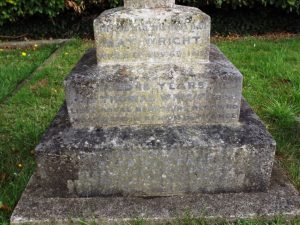 Father William Lieber, a Belgian, is an interesting aside to the story. He is buried in Sleaford Cemetery and his Memorial inscription reads: