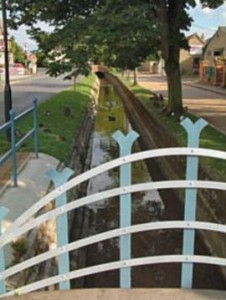 According to the Office of National Statistics at the last [2011] Census the village of Ruskington, near Sleaford, Lincolnshire, had a total population of 5,637, living in 2,479 households – an average of just 2.3 persons per household.

Ruskington is the largest village in Lincolnshire, by population, with much of its latter day growth due to attracting incomers, including people who have chosen to retire here.

The population particularly grew in the 1980s as planning approval was given for the addition of several hundred houses. 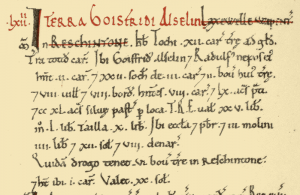 The village dates back to pre-Domesday times and Ruskington All Saints is a Norman church, built in 1086 to replace the earlier wooden Anglo-Saxon church on the site.

Although part of the tower masonry survives it was rebuilt in 1620 after damage in 1618.

At the time of the Domesday Survey [reference above left] the village was recorded as “Rischintone” (“farmstead where rushes grow“) and had a population of 39 households (very large for its time), made up of 8 villagers, 8 smallholders, 22 freemen and 1 priest.

At the Start of The Great War 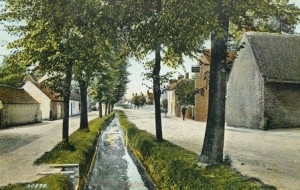 A hundred years ago, however, the village was a very different place.

Not surprisingly the vast majority of the men were employed in agriculture in some form or other. Even so, it is evident from the Service Papers, many families sent more than one son tp the battlefields. 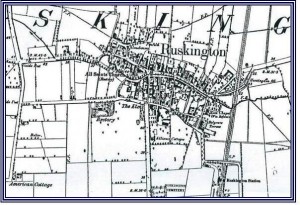 A map of the village, taken from the Ordnance Survey series “Partially revised 1912/13“, shows a linear village form, either side of the Beck, splitting the High Street in its ‘North‘ and ‘South‘ Sides, and with the Parish Church at one end.

Various streets led off from this main road, but certainly not to the extent found today. [See: “Ruskington Parish Council Map“]

The two graphs below show how the village had grown of the previous century, from just 483 persons in 1801 to nearly three times that in 1911 – though the population had ‘levelled off’ over the previous 30 years.

The second graph shows the Population Structure in 1911, i.e. the proportion of males to females in each age group. [Demographers would call this a typical ‘Expanding Pyramid’, with a larger proportion of the people in the younger age groups.]

When War was declared on 4 August 1914 we shall see that the men of Ruskington were not slow to answer the Country’s call. The ‘blue‘ side of the graph on the right above, however, shows only 137 men of an age where they might be expected to volunteer (i.e. 20 – 35 years).

Despite this small base of possible recruits, during the War ‘The Lincolnshire Chronicle’ published the names and photographs of at least 64 local men who had joined up, up to 1915. At least 20 others, not among those who details were published, are known to have made the Supreme Sacrifice. There are undoubtedly many more, yet to be identified, who also enlisted in the service of King and Country.

[Research is continuing and the site will be revised as more information comes to hand. Already, however, a number of men with associations with the village, who made the Supreme Sacrifice, but who are not on the Village Memorials, have been found and their details added to the site. ]

Eleven local men gave their lives in World War 2. Less information is available for these men, as Service Records are accessible only to surviving family members. No Census details have been made available after 1911. However, some details of their service can be accessed via the ‘ World War 2 ‘  link on the Menu above.

In addition, “The 1939 Register“, which was taken on 29 September 1939, provides information originally used to produce identity cards and, once rationing was introduced in January 1940, to issue ration books. Where appropriate these records have been incorporated to provide extra details of our families just as War was declared.