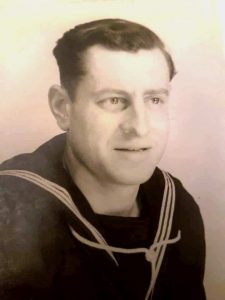 Ronald was born on 8 May 1918, in the Doncaster District, probably Gainsborough. He was the son of Herbert Alfred (Joiner) and Dorothy Grace (née Arnold) Hossack, of ‘The Chase’, Manor Street, Ruskington. He had two younger brothers, John, born in 1925, and Phillip James (born in 1931 and died in March 2019).

Records show that when the Second World War began in 1939 the family was living on Westgate, Ruskington.

Herbert Alfred Hossack died in December 1963, aged 71, and was buried on Christmas Eve. Ronald’s mother, Dorothy Grace, lived until she was 86, dying in October 1979. They are buried together in Ruskington Cemetery, New Section, Graves D 354 and 355. [Ronald’s brother John died in April 1975 and is buried in Grave E 151.]

Ronald was a keen collector and family members state that he created a small museum in one of the outbuildings at 11 Westgate, Ruskington. It was cleared when his Mum died in 1979, and the contents went to the museum in Lincoln, some of which remain on display to this day. [See: “Ancient Sites in Ruskington“]

Currently it has not been established when Ronald enlisted but a suffix to his Navy Service note tells us a lot about the nature of his service. It reads: ”  Act/Able Seaman (DEMS), C/JX 334800, Goolistan, steamship, (President III, O/P), 23 November 1942, MPK “.

President III was the accounting base for the naval gunners on Defensively Armed Merchant Ships (DEMS). These were the naval seamen that manned the guns on merchant ships. ‘MPK‘ means “Missing Presumed Killed“.

Shortly before he lost his life Ronald’s ship, SS Goolistan’ was part of Convoy PQ 18, one of the Arctic convoys sent from Britain to aid the Soviet Union in the war against Nazi Germany. The convoy departed Loch Ewe, Scotland on 2 September 1942 and arrived in Arkhangelsk on 21 September 1942.

Following the disastrous losses to Convoy PQ 17, the British were determined to provide the convoy with air cover. The new escort carrier HMS Avenger had arrived from the United States and formed the core of the escorting force.

The convoy consisted of forty merchant ships (11 British, 20 US, 6 Soviet and 3 Panamanian) and 4 Fleet auxiliaries; 2 oilers, a rescue ship and a CAM ship (catapult aircraft merchant ship). Despite being attacked all the way by German aircraft and surface vessels, the convoy arrived on 19 September.

Thirteen ships had been lost, but 28 had arrived safely, and the Arctic convoy route, which had been suspended since the loss of PQ 17, had been re-established. Furthermore, three U-boats had been destroyed, and 40 German aircraft had been shot down.

Returning from Archangel, SS Goolistan was torpedoed by German submarine U-625, Commander Hans Becker, when 300 miles WNW of North Cape, Archangel bound for Manchester with timber and general cargo. There were no survivors – see below. (75.50N 16.45E)

At 00.56 hours on 23 November 1942 the unescorted Goolistan (Master William Thomson), a straggler from station #53 in convoy QP-15, was hit by one of two torpedoes from U-625 between Bear Island and Spitzbergen.

The U-boat had spotted the ship one hour earlier and approached for a submerged attack, but experienced some difficulties due to the ice cold weather as important gauges were frozen, the periscope became stuck on twelve meters and the periscope head had to be constantly freed from ice by diving.

The explosion set the cargo on fire and the crew began to abandon ship when she settled slowly. At 01.45 hours, the burning vessel sank after being hit underneath the bridge by a coup de grâce at 01.18 hours.

The Germans questioned the occupants of the lifeboats and were told that the master had remained aboard when they asked for him. However, the survivors were never found, the master, 41 crew members and ten gunners were lost – so clearly the men in the lifeboats were left to their fate in the Arctic Circle in November.

…. about the 61 men who died alongside Ronald.

Not surprisingly, Ronald has no known grave and is commemorated with his comrades and shipmates on the Chatham Naval Memorial.

This entry was posted in Chatham Naval Memorial, Royal Navy, Seaman and tagged Killed in Action. Bookmark the permalink.