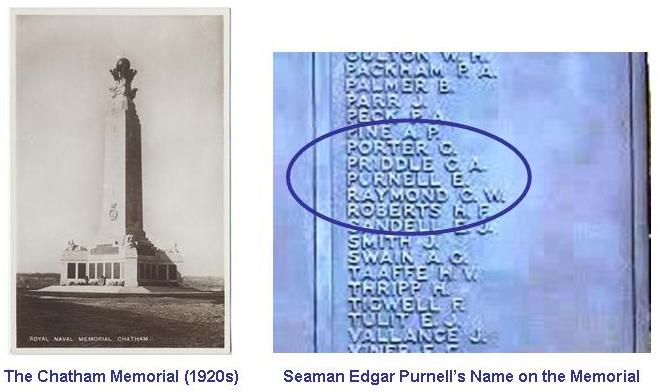 Edgar was born on the 31 October 1898 the son of William Ernest (Joiner) and Emmeline (née Tong) Purnell. He had an older brother, Frank Thomas, two younger sisters, Florence Annie and Nellie, and two younger brothers, Henry and Alfred George.

In 1901 (Census RG 13/3048) the family were living in Post Office Street, Ruskington, Lincolnshire. Between Alfred’s birth and the next Census (1911 RG 14/19618) Edgar’s mother had died and the family moved to Manor Street, Ruskington. Emmeline was only 33 when she died in January/February 1909. She was buried in Grave B. 65, Ruskington Cemetery, Old Plot.

‘The Lincolnshire Chronicle’ [27 November 1915] reported that before he enlisted in Royal Navy in February 1915 Edgar had been ” .. a telegraph messenger in the post office. ”

According to ‘The Lincolnshire Chronicle’ [see above] Edgar enlisted in the Royal Navy on 15 February 1915. He was, therefore, aged 17 yrs. 107 days, and that he trained at Devonport onboard HMS Impregnable. The CWGC Records state that Edgar was:  “Killed by a mine explosion off the Orkneys “ on 5 June 1916. (Index Chatham Naval Memorial, p. 287).

Edgar was one of 643 sailors who lost their lives on board the HMS Hampshire.  On Monday, 5th June 1916, about 1½ miles [2.5 kms.] off Marwick Head in Orkney. The Royal Naval War Graves Roll gives his cause of death as : “Killed or died as a direct result of enemy action. ”

Official reports had it that at about 7.50 p.m. H.M.S. Hampshire struck a German mine and sank. According to an official Ministry of Defence site the ships full compliment at the time of sailing was 655 Officers and men plus 7 passengers, who were Lord Kitchener and his staff. 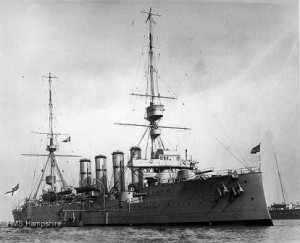 The armoured cruiser HMS Hampshire was built on the Tyne by Armstrong Whitworth and launched on 24th September 1903.

When the Hampshire was commissioned into the Royal Navy in 1905 she joined the Channel Fleet before being transferred to the Mediterranean in 1911.

After Edgar joined his ship, on 31 May 1916 the Hampshire served in the 2nd Cruiser Squadron at the Battle of Jutland, returning safely to Scapa Flow in the Orkneys on 3 June. Two days later, despite appalling weather conditions, the cruiser set sail for Archangel in northern Russia with the War Minister, Lord Kitchener, and his staff on board. Kitchener had considerable prestige overseas and he had been chosen to discuss the future conduct of the war with the Tsar and the provision of military and financial assistance to Russia.

The Hampshire experienced considerable difficulties in making headway in the storm and she was only 1½ miles [2.5 kms.] from land when there was a sudden explosion on her port side. The ship’s crew tried to launch the lifeboats, but they were hindered by the heavy seas and the failure of the ship’s electrical generators. The Hampshire sank within 15 minutes and, although a few crew members managed to take to the cruiser’s emergency rafts, most were forced to jump into the freezing, stormy waters.

Out of the 662 men on board the Hampshire, 650 were lost. Among the dead were Kitchener and his 6 staff. The War Minister was not killed in the explosion, as some survivors recalled having been ordered to “Make way for Lord Kitchener” and some reported seeing him on the upper deck. Over 100 bodies were subsequently recovered, but Kitchener’s body was not among them. The 12 men who survived the disaster had managed to reach the rocky coast of the Orkney Islands on the Hampshire’s rafts. 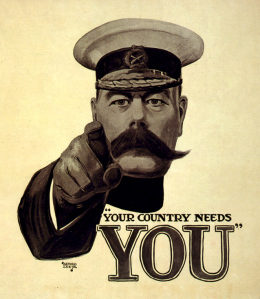 Boy, 1st Class, Edgar Purnell was not one of the survivors. The wreck of HMS Hampshire is still today [2015] a war grave and our brave Ruskington lad lies with Field Marshal Horatio Herbert Kitchener, 1st Earl Kitchener KG, KP, GCB, OM, GCSI, GCMG, GCIE, ADC, PC; “Kitchener of Khartoum”, whose iconic poster stirred many a young man to enlist in the early days of the Great War.

Edgar is commemorated, with most of the others who died on board the Hampshire, on the Chatham Naval Memorial. The people of Orkneys erected their own monument to the great man, but fittingly it also serves as a lasting memorial to all on board.

On the 17 June 1916 ‘The Lincolnshire Chronicle’ published the following by way of an Obituary for Edgar:

” ROLL OF HONOUR – Very much sympathy is felt for Mr. W. E. Purnell and family, Manor Street in the loss they have sustained by the death of their third son, who went down with the ‘Hampshire’. The official intimidation from the Admiralty reached the village on Sunday morning. He was not 18 years of age until September next and joined the Navy on February 15th 1915. He had three months training onboard the ‘Impregnable’, and was afterward transferred to the ‘Hampshire’. He had got through his torpedo course and was learning gunnery. etc. “

This entry was posted in Chatham Naval Memorial, Royal Navy, Seaman and tagged Killed in Action. Bookmark the permalink.