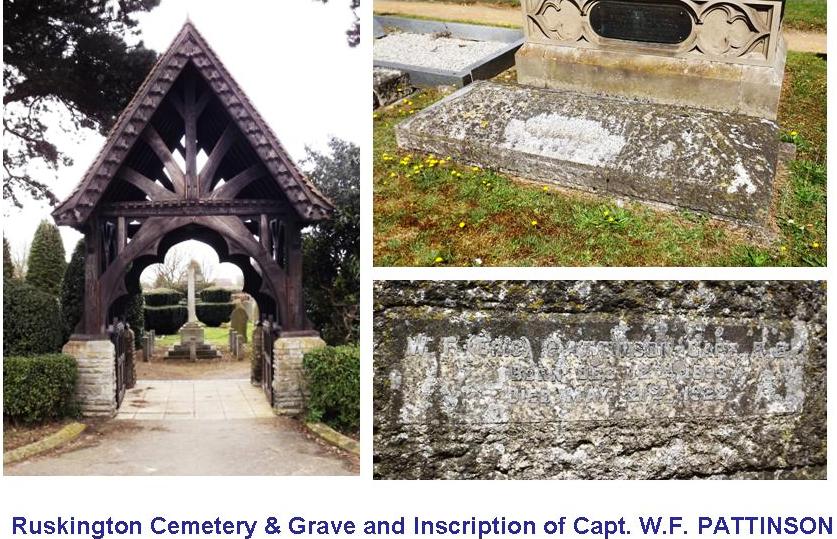 William was born in Edmonton, Middlesex,on 12 December 1893, the son of John William (Building Contractor) and Lucy Ellen (née Waterhouse) Pattinson. He had a younger sister, Frieda.

(N.B. William may never have actually been to Ruskington, but his father, John Pattinson was born in Ruskington in 1870 and died there in the April quarter 1939, although he lived in many other places in between. The Pattinson family were well-known in the village, indeed one of the largest graves in the village Cemetery covers 12 plots and is marked by a granite obelisk. See: Ruskington Cemetery, Old Plot, South Border, Graves 25 – 34.)

In 1901 (Census RG 13/1150) the family were living at 19 Craven Road, Reading, Berkshire. The 1911 Census (RG 14/5119) shows William a boarder at The Brighton College School For Youths, Eastern Road, Brighton. Internet records show a number of ex-pupils from this College enlisting as Officers as the War progressed. 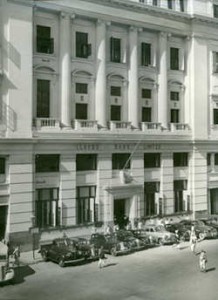 On 8 October 1918 William married Dorothy Violet Saunders at St Matthias Church, Earls Court, Kensington, London. No record has been found of any children of the marriage.

It seems that after his discharge from the Army in 1919, according to his MIC, William went to work for Cox and Co., Bombay, India, (photo left). (Cox and Co. were founded in 1758 and were predominantly agents and bankers to the British Army. The Bank was absorbed in Lloyds Bank in 1923.) 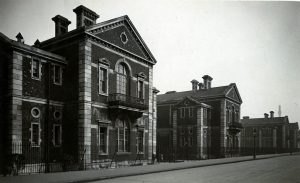 He is buried in the Old Plot, South Border, Grave 31, Ruskington Cemetery, and lies next to his paternal grandparents, William and Anne (née Cowlishaw) Pattinson.

about the Pattinson family on our sister site “Ruskington Burials“.

William’s 404th Company was allocated to the 51st Highland Division, a formation of the Territorial Force. When War was declared the elements of the Division had recently left for their Summer camps. All units were mobilised for full time war service on 5 August 1914. A week later the Division was ordered to concentrate at Bedford. On 22 October it was inspected there by King George V.

Several units left the Division during the period November 1914 – March 1915, being sent independently to France as reinforcements for the BEF.  The Medal Index Card (MIC) indicates that William was posted to France on 10 October 1914, as a 2nd Lieutenant, arriving the next day. As he was only 20 years old at the time it is more than likely that he was a Territorial Force Officer or a member of a CCF. Indeed his Service Record at the National Archive dates his Service from 1913. William was later promoted to Captain and Acting Major.

The rest of the Division proceeded to France in early May 1915. The Division concentrated in the area of Lillers, Busnes and Robecq and were rushed to the defence of Ypres, being in action until the 19th of May when they moved to Estaires on the River Lys. They were in action in the The Battle of Festubert and The Second Action of Givenchy before moving south to The Somme taking over the line near Hamel.

In 1916 they were in action in the Battles of the Somme, including the attacks on High Wood and The Battle of the Ancre, capturing Beaumont Hamel, taking more than 2000 prisoners. In 1917 they took part in the Arras Offensive, The Battle of Pilkem Ridge, The Battle of Menin Road Ridge and the Cambrai Operations. The Division remained in the Cambrai area until the 21st of March 1918, when the enemy launched an overwhelming attack and the Division were engaged in a fighting withdrawal back to Bapaume.

In April they moved north and fought in The Battles of the Lys before a quiet spell at Oppy near Arras, from May to July. They were then in action at The Battle of the Tardenois, The Battle of the Scarpe, the pursuit to the Selle and the Final Advance in Picardy. The Division was resting the Cambrai-Iwuy area at the Armistice and demobilisation began December.

The London Gazette Issue 31586, 7 October 1919, page 12404, reported that the Croix de Guerre, (left) had been conferred on William by The President of the French Republic. William retired from the Army on 1 July 1919 and died on 21 May 1922 in Queen Alexandra Military Hospital, Millbank, Middlesex.

As recorded above, William was brought back to his family home village after his death on 21 May 1922, at Queen Alexandra Military Hospital, Middlesex, and was buried in Ruskington Cemetery.

As he died after the CWGC cut-off date of 31 August 1921 for the dead of the Great War, so William has no CWGC headstone, but is buried in his family plot. Neither does his name appear on any of the village War Memorial, presumably as they had been completed before he died.

This entry was posted in Captain, Royal Engineers, Ruskington Cemetery and tagged Died. Bookmark the permalink.