According to his Service Papers, George was born at Ruskington Fen in September 1890, the son of George (Waggoner) and Hannah (Annie) (née Auckland) Claydon. He had older twin brothers, Charles and John William (died in 1886, aged 9), and a younger sister, Frances Mary.

Seven months after his birth, George and his mother were lodging with the Stevens family at High Street, Somerby, nr. Melton Mowbray, Leicestershire. Father George, Snr. was lodging two houses away, with the two older boys, at the home of William Harris. (1891 Census RG 12/2543). Ten years later the 1901 Census (RG 13/2985) saw the family at 28 Garden Street, Thurmanston, Leicestershire, where they remained until after the War at least (Medals posted there in 1921).

At the time of his death George’s address was recorded as 28 Garden Street, Thurmaston, near Leicester.

N.B. George’s older brother, Charles, also served in the Great War, but it has not been possible to ascertain with which Regiment he served.

George enlisted Leicester on 19 January 1907, on a “5 + 7” Service period, i.e. 5 years of active service plus a further 7 years in the Reserve. He gave his age as 18 years 4 months. As stated above he served with his Battalion in India until the end of his 5 year active service period, then he should have returned to England and be posted to the ‘Reserve’. 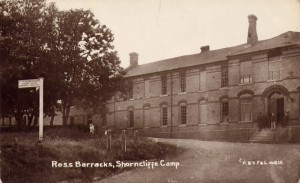 His Service Papers show that after enlistment George was based at Shorncliffe Camp, near Folkestone, Kent. He remained there until he sailed on H.S. Rohilla to his posting to India, leaving on 4 March 1909, arriving at Belgaum, in the southern division of Bombay, on 26 March.

Over the nest 5 years George was moved around India with his Battalion – to Bellamy Barracks on 6 March 1911; to Bareilly Barracks on 11 February 1913; to Ranikhet, a hill station and cantonment town in the Almora District in the Indian state of Utterakhand, on 19 March 1913; Bareilly again – 24 October 1913, before returning to Ranikhet. Clearly, then, George did not return to England at the end of his original 5 years ‘Active Service’ period, so must have extended his time in India.

At the outbreak of War the 2nd Battalion was  in Ranikhet, India, part of Gharwal Brigade, Meerut Division of the Indian Army. Like many Indian Battalions the 2nd Leicesters were recalled and on 12 October 1914 the Division landed at Marseilles for service in France.

George’s Service Papers show he had extended his active service period to 7 years and seems to have still have been with his Battalion when War was declared. Certainly, his Medal Index Card gives his ‘Disembarkation Date’ as 12 October 1914 – the same as the Battalion. 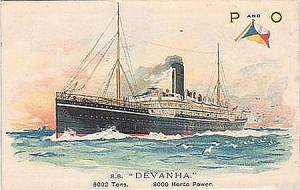 After disembarkation the Battalion moved into camp at Orleans until the 26th 9.30 a.m. when it entrained and arrived at Lillers about 7 p.m. the next day. The Battalion: “… lay in town square the night of 27th – 28th. ” The Battalion was first in the trenches on the 29th and the following day suffered their first casualties, when ” Capt. Tristram and 3 men killed, and 9 men wounded. ” [Capt. Lancelot Barrington Crofts TRISTRAM]

In the later days of November the 2nd Battalion went into action near Festubert and between 20 – 24th had 28 Officers and men killed in action. Almost all of these casualties are buried in Le Touret Military Cemetery or commemorated on Le Touret Memorial. By the end of the year the Battalion’s total casualties since arriving in France were 74  (53 Killed in Action;  16 Died of Wounds;  5 Died). [See: Footnote below]

On 5 November 1914 George had been promoted in the field to Acting L/Cpl (paid), and appointed L/Cpl on the 24th. In the New Year, after further training and rotations in the front line, the Battalion moved to Richebourg-St Vaast on 8 March, then to front line trenches near Port Arthur.

On 13 February, George was sent to the 19th Field Ambulance, suffering from “Contusions of the Foot” and transferred to No. 6 Casualty Clearing Station (C.C.S.), at Merville, the same day. This injury must have been quite serious as he was not discharged from the Convalescent Camp at Rouen until 7 March 1915, re-joining his Battalion on the 17th.

In his absence, on 10 March the Battalion attacked Neuve Chapelle. The War Diary records that the front line and several other enemy trenches were taken, with their final objectives not being achieved until 8.20 a.m. on the 13th.

CWGC Records show that in this four day period the Battalion had 92 Officers and men killed in action. Colonel Wylly, in his history (see Sources below) gives the casualties from all ranks as 250. 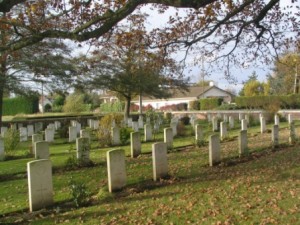 The War Diary notes that only a few reached the enemy’s parapet and later withdrew to reserve trenches, and in the evening of the 16th to Croix-Barbée. Col. Wylly records casualties during the attack and operations leading up to it as 256.

According to CWGC Records, on 14/15 May 1915 the 2nd Battalion had 78 Officer and men killed in action, 62 of these are either buried in Le Touret Military Cemetery or, with George, commemorated on the Memorial.

Despite being born there, George does not seem to have lived in Ruskington for any length of time. It is likely his father occupation as a farm worker brought him to the village for a short period before moving on, e.g. his brother, John, only two years older, was born in North Kyme. For this reason George’s name does not appear on any of Ruskington’s ‘official’ War Memorials.

This entry was posted in Corporal, Le Touret Memorial, Leicestershire Regiment and tagged Killed in Action. Bookmark the permalink.