Joseph was born in Ruskington, Lincolnshire, in August/September 1890, the son of William and Mary Ann (née Swallow) Arnold (Married June quarter 1887). [It is possible Joseph had an older brother, Charles, who died in 1888.]

Joseph’s father, William, had died shortly before his birth and his mother had gone into service, working as a ‘Domestic Servant’ for the Strawson family (Farmers), Town Street, Burton Coggles, nr. Grantham. The first Census after his birth (1891 RG 12/2577) shows 8 month old Joseph living with his grandparents, Isaac and Eliza Arnold, at Knipton Houses, Ruskington.

In the March quarter 1894 Mary Ann re-married Henry Marriott, and in 1901 (Census RG 13/3049) Joseph was living with his new family at 5 Reform Place, New Sleaford. He had 4 step-brothers, Charles M., Cecil, Edward and Harold. By 1911 (Census RG 14/19632) the Marriott family had added Gladys, John Thomas, Evelyn, Lily, Daisy and Leonard. They were still living at 5 Reform Place. After the War, Henry and Mary Anne had moved to 92 Beacon Hill, Newark. She died in the September quarter 1961 in the Newark District, Nottinghamshire.

However, the 1911 Census shows that Joseph was by then a serving ‘Gunner’ with 19 Brigade, Royal Field Artillery, based at Temple Barracks, Orange Free State, South Africa.

Joseph does not seem to have lived in Ruskington for any length of time, beyond that spent at his paternal grandparents before his mother re-married, 20 years before the outbreak of The Great War. For this reason his name does not appear on any of Ruskington’s ‘official’ War Memorials, but was listed in the Memorial Gardens (but no longer).

Joseph re-enlisted at Sleaford. It is most likely that he had completed his Service with Regular Army after 5 years and posted to the Reserve for the remaining 7 years of his service. He would have been recalled on the outbreak of War on 4 August 1914.

His Medal Index Card (MIC) shows that ‘Bombardier‘ Joseph Arnold was posted to France with his Battery on 20 December 1914. The 1 Brigade was a unit of Britain’s pre-war regular army. It is also sometimes shown as 1 Brigade RFA. Three years before the outbreak of War Joseph was already serving in South Africa with his Brigade (1911 Census) and his Service Number suggests he enlisted about 1907/8.

In August 1914 the Brigade was at Edinburgh and comprised numbers 13, 67 and 69 Batteries. The Brigade was re-formed at Winchester on 23 November 1914 and came under the command of the 27th Division under Brig. Gen. A. Stokes. It was then made up of 98, Joseph’s 132 and 133 Batteries. The 27th was formed at Magdalen Hill Camp near Winchester in November-December 1914 and was soon rushed as a much-needed reinforcement to France. 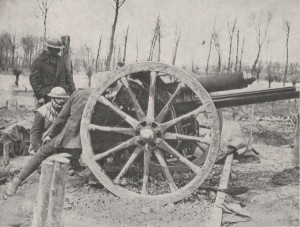 The 1st Brigade R.F.A. went to France with the Division in December 1914 (see Joseph’s MIC date above) and later moved to Salonika in late 1915, by which time Joseph had been killed in action.

The Brigade was equipped with 4 – 18 pounder guns, similar to that pictured left. Each gun had a crew of six, plus men from the ammunition column to bring up the shells.

In 1915 the Brigade saw action in The “Action of St. Eloi” 14-15 March 1915, a battle to recapture ‘The Mound’ which was lost the previous day during the Battle of Neuve Chapelle, the first attempt by the British to launch an assault from the trenches.

This action was almost immediately followed by The Second Battle of Ypres, 22nd April – 25th May 1915. CWGC Records show that 9 men of the 132nd Battery were killed in action during the period of this Battle. Four of these, including Joseph died on the 9/10 May, during the phase of the Battle known as The Battle of Aubers Ridge. They have no known grave and, with Joseph, are commemorated the Ypres (Menin Gate) Memorial. Whilst there is no evidence, it is of course possible that these men belonged to the same gun.

(N.B. This Register states that Joseph was serving with the 98th Battery at the time of his death. However, 98th Battery was also part of 1st Brigade, so a later transfer is not difficult to see.)

As stated above Joseph is not named on any of Ruskington’s Memorials. The only significant time he lived in the village was with his grandparents who were probably deceased before details of the village War dead were being collated. Neither does he appear on any other Memorial or Roll of Honour in Lincolnshire.