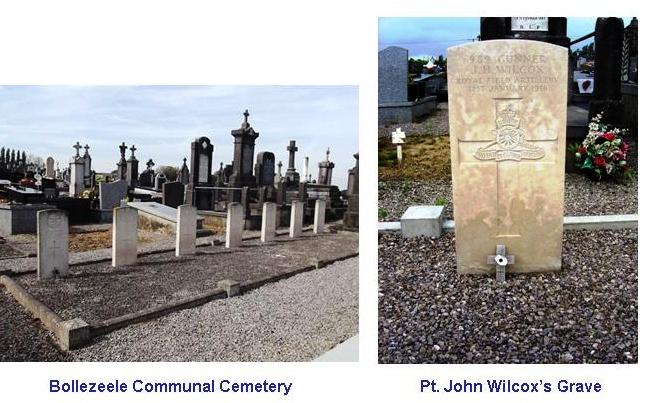 John was born in Ruskington, Lincolnshire in c. April 1891, the eldest son of Joseph (Builder’s Labourer) and Elizabeth (née Walker) Wilcox. He had a younger brother, Robert, and a younger sister, Lucy.

John enlisted as a Gunner in the 2nd (West Riding) Brigade, Royal Field Artillery [RFA], at Halifax, Yorkshire, on the 3rd May 1912, for a period of four years in the Territorial Force. Between the 18th – 25th August 1912 John underwent his first training on Salisbury Plain, and a year later, 9th – 17th August 1913, he was on his next course as Trawsfyndd, N. Wales.

The Brigade entrained at Bawtry on 13 April 1915, arriving in France (Le Havre) on the 15th.  John’s Medal Index Card [MIC] shows that he went out with his Brigade on that day. 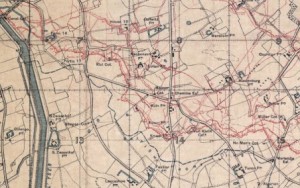 John’s Division first went into action on the night of 22/23 April near Laventie. John would also, most likely, been involved in The Battle of Aubers Ridge, the start of the “Shell Scandal“, on 9 May 1915.

They moved to the Ypres area in July 1915 remaining there for the remainder of 1915.

From July 1915 until the end of the year it was a general war of attrition in respect of II West Riding Brigade. They were stationed on the west side of the Yser Canal, just to the north of Ypres, shelling the German positions on the east side and vice versa.

On 7 July 1915 6th Battery of II West Riding Brigade was just north west of Brielen which is about 3km NW of Ypres.

During this time the 49th (West Riding) Division was subjected to the First German Phosgene Attack on 19 December 1915. German prisoners had indicated that a gas attack was imminent and the wind was in the direction for it, so standing orders for gas alert were in place, putting not only front-line troops but the British artillery on stand-by.

When the cloud gas was detected at 5.00 a,m. all the bells, gongs and klaxons in the front line were sounded and immediate rifle and machine gun fire opened. In addition, the Field Artillery opened a shrapnel barrage on predetermined night lines.

At 6.15 a.m. a second phase opened, when the German bombardment switched to gas shell, which deluged the British front. This was novel, and many British troops were caught unawares as the shells fell and discharged near them. These shells contained a gas new to warfare: phosgene. It was also fortunate that the wind was rather strong, carrying the gas through the forward positions quickly, within half an hour – for the British gas masks were not designed to combat high concentrations of phosgene.

The British front line stood firm, although casualties were serious. In addition to men lost to shellfire, just over 1,000 men were incapacitated by the gas of whom 120 died soon afterwards. At 2.15 p.m. the enemy commenced a heavy bombardment which lasted until the evening of 21 December.

” The terrible effects of phosgene are on inhaling, hydrochloric acid is produced in the alveoli (the air-containing cells of the lungs), which reacts with the capillary wall of the lung and produces an Oedemal fluid. This eventually floods the lungs and causes suffocation. After initial exposure, phosgene in which produces coughing, nausea, vomiting and headache, the effects often seem to disappear. But after a period of perhaps 24 hours, the condition is worsened by exertion. In other words, the affected person is killed by drowning in their own body fluid, which worsens as their body tries to fight its effects. ”

John “Died of Natural Causes” on 31 January 1916. It is not known if those causes could have been attributable to the gas attack. In total he had served a total of 3 years 274 days with the Colours.