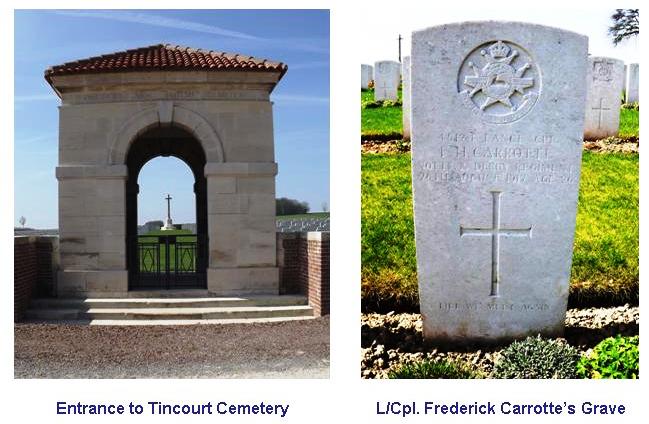 Frederick was born in Church Lane, Ruskington, Lincolnshire, in the December quarter 1890, the son of Charles (Blacksmith) and Margaret (née Crust) Carrotte. He had two older brothers, Sidney and Charles William, and older sister, Olive Maggie, and a younger sister, May (1891 Census RG 12/2577). Ten years later (1901 Census RG 13/3047) the family had moved to the ‘Brickyard’, Dorrington, Lincolnshire.

In 1911 (Census RG 14/19617) Frederick was living with his widowed father and siblings at Freiston House, Dorrington, Lincolnshire, and working as a “Fellmonger”. His mother, Margaret, had died on 21 July 1909, aged 43. She is buried in Ruskington Cemetery, Old Plot, Grave: North Border 15.

In the December quarter 1914 Frederick’s father, Charles, remarried, Mary Elizabeth Bailey. She died in September 1941 and was buried alongside Margaret, in Grave 14, to be joined by Charles after his death, aged 80, in December 1945.

In the March quarter 1913 Frederick married Lizzie Harby, from Quarrington, Sleaford. They had a son, Joseph, born on 26 October 1915.

According to the SDGW database, Frederick enlisted at Sleaford, Lincolnshire, but unfortunately, his Service papers have been destroyed during a Second World War bombing raid. However, when reporting his death, ‘The Lincolnshire Chronicle‘ (see below) stated that he enlisted on 27 April 1917 and was posted to France four months later.
Frederick’s 15th (Service) Battalion was formed at Nottingham in February 1915, by the Mayor and a Committee, as a Bantam Battalion. In June 1915 they moved to Masham and were attached to 105th Brigade in 35th Division. In August 1915 they moved again to Salisbury Plain and on the 1st February 1916 landed in France.
The 15th (Bantam) Battalion, was made up initially of men who although fit were below the normal minimum service height of 5′ 3″ (1.6 m). They moved to France with the 35th (Bantam) Division in 1916 and fought with great distinction and heavy casualties throughout the 1916 battles on the Somme. However, at the end of 1916, the problems of finding ‘bantam‘ reinforcements in sufficient numbers became too difficult; so the 15th was redesignated a normal ‘service‘ battalion and fought as such until the end of the War.
In August 1917, about the time Frederick joined his Battalion, the War Diary reported that much of the Battalion’s time was spent at camp in the early part of this month, in training and preparation for an attack planned to knock out a dangerous position in the German lines, called “The Knoll“, near Gillemont Farm, east of Lempire on the Somme. The War Diary for that period reads as follows:
“17th   Moved via Longasvesnes and Villers-Faucon to near St Emilie. Camped at 62cE23a and b.
18th    Moved to assembly position for an attack on the Knoll, moving via Ronssoy-Lempire-Tombois Farm road, to Fleeceall Post and Fag Lane trenches to the Old Barrier on the Sunken Road.
19th    A successful attack. Began at 4am and took trenches, consolidated the positions gained and built a bombing block. Casualties 25 killed, 53 wounded, 2 died of wounds and 5 missing.
20th    Relieved by the 14th Glos, moved to St Emilie. Remained for three days. “

One of Frederick’s comrades, L/Cpl William Brindley, of Buxton, was killed in this attack. 23 other men of the 15th Battalion died, 2 more dying of wounds and 53 wounded, with a further 5 missing. [CLICK his name to read more.]

On the 19th Frederick’s ‘Z’ Company, with ‘Y’ Company, relieved  ‘W’ and ‘X’ Companies and during the night worked on consolidating the captured positions from the previous two days fighting, before moving back into billets at St Emilie on the evening of the 20th. By 2.00 a.m. on 25 August, however, the Battalion had relieved the 15th Cheshires at The Knoll and 2 hours later came under a heavy bombardment. The War Diary reads:

“At about the same time [4.00 a.m.] the enemy attacked Gillemont Farm. No attack was 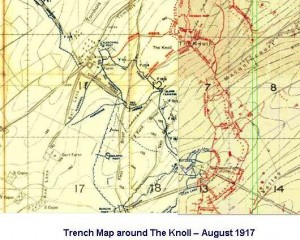 made on the Knoll. The bombardment was heaviest on our right where ‘X’ Coy. were, then the trenches were badly damaged and we sustained a good many casualties.

5.30 a.m. The bombardment slackened on the Knoll.

6.20 a.m. The enemy shelled Tombois Sunken Road, there was heavy shelling around Gillemont.

6.55 a.m. A message was received that Gillemont Farm was lost, here the enemy took the Farm and part of our old front line. This was regained in the evening by counter-attack by the 19th D.L.I. Regt. leaving the situation at Gillemont the same as it had been a month previously. Shelling continued over the Knoll and Fleeceall Post at intervals during the day. Our casualties amounted to 19 killed and 44 wounded. ”

Later that night Frederick’s Battalion was relieved by the 16th Cheshires and returned to billets at St. Emilie.

A total of 22 men of the 15th Battalion killed in action on 25 August 1917 and Frederick was one of four killed the following day. From the dates given in the Obituary shown below, it is unlikely that he had been with his Battalion more than a few days. Five of the Battalion’s casualties at this time lie with him in Tincourt Cemetery; most of the others are buried in Templeux-le-Guerard British Cemetery. The villages of Tincourt and Boucly were occupied by British troops in March 1917, during the German Retreat to the Hindenburg Line. From May until March 1918, Tincourt became a centre for Casualty Clearing Stations, and it was in one of these that Frederick succumbed to his wounds.

On the 8 September 1917 the ‘Lincolnshire Chronicle’ carried a long Obituary for Frederick which gave some specific details of the circumstances surrounding his death:  ” DIED OF WOUNDS – It is with deep regret we have to report the death of Lance-Corpl. Fred,.Hy. Carrotte, son of Mr. C. Carrotte, Dorrington, which took place at a hospital in France, on August 26th. He joined the Sherwood Foresters on April 27th, 1916, and was drafted to France four months later.

The first intimation of his wounds was received from the Infantry Records Office, Lichfield, dated 27th August, by his wife, which stated that her husband was dangerously ill suffering from gunshot wounds in arm and side, and express sympathy and regret. By the same post she received a most cheery letter from her husband, dated 23rd August, stating he was very  well. Since those letters she received one dated Aug 28th, from his great friend, which read:-

“Dear Madam, I am very sorry to tell you that your husband was wounded on the morning of the 25th, He was hit in the arm, and was at once taken away by a stretcher bearer. He could walk. He was hit very close to where I stood, and passed by me to go out of the trenches, It would very soon be dressed, and he would soon be on his way to hospital, where he would receive the best attention, and I and the rest earnestly hope that you will soon hear that he is getting on alright, as he was one of the best of chaps, liked by everyone in 15th Platoon, especially the gun team, and I hope to see dear old Fred one of these days in England.

He is one of the nicest chaps I have ever met; ever ready to do anyone a good turn, and a jolly good worker, and I hope, you will soon hear some good news. We all have to thank God that we got out of it as well as we did, as we had a very rough time, and all that were left were properly done up. Trusting you will not worry too much, as if you have not already heard from him, you will in a day or two. Cheer up and keep a good heart. – I am your husband’s ever friend. Signed Corpl. J. Whitworth, ‘L’ Company.”

This was followed by a letter dated 29th Aug. from his Commanding Officer, announcing that he had died of wounds after being hit by a shell. He was aged 27 year and leaves a widow and two young children. “

A week late the same source reported: “  MUFFLED PEAL :To show their last mark of respect for Pte. [sic] Fred Carrotte, whose death we reported last week, the ringers of the parish church rang a muffled peal. “