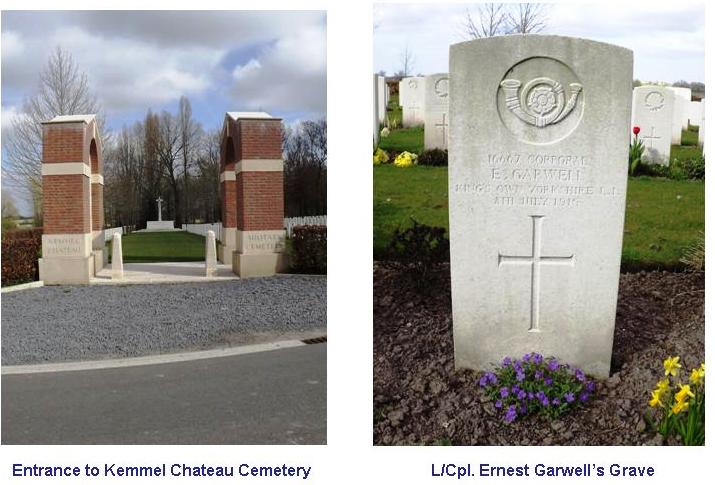 In February 1901 Ernest’s mother, Elizabeth, died, aged 46, and was buried in Ruskington Cemetery, Old Plot, Grave A. 218. (About six months later – December quarter 1901 – his father re-married, Eliza Elizabeth Marrows.) The Census of that year (RG 13/3048) shows Ernest living with his widowed father in one of the Priory Cottages, Ruskington, with siblings, Rose, Frederick and Albert. His father, William Cheavin, was also buried in Ruskington Cemetery, Old Plot, Grave B. 191, after his death in October 1923, at the age of 75.

Ten years later (1911 Census RG 14/27550) Ernest had left home and was one of the lodgers of Mary Ann Johnson at Guiseley Cottage, Royston, Barnsley, Yorkshire, and working as a “Railway Porter”. His father and stepmother were still at Priory Cottages, Ruskington.

‘The Lincolnshire Chronicle’ [27 November 1915] reported that: “Pte. A. Garwell, son of Mr William Garwell, Priory Cottages, went to Canada some years ago and when War broke out joined the Canadian Army, being now stationed in the Phillipines Islands. ” This almost certainly refers to Ernest’s younger brother, Albert.

According to the SDGW database, Ernest enlisted in the Kings Own Yorkshire Light Infantry [KOYLI] at Doncaster, Yorkshire, but unfortunately, his Service Papers have been destroyed during a Second World War bombing raid. However, by comparing his Service Number with others of known date it appears he joined up at the end of August 1914 [Pt. 16668 enlisted 31 August 1914] (N.B. CWGC gives his rank as “Corporal” although the Grave Registration Report has been amended to “L/Cpl.”. He appears as L/Cpl. on Ruskington Memorials)

The 1st Battalion, KOYLI, was based in Singapore when War was declared. It returned to England and landed at Southampton on 9 November 1914 and moved to Hursley Park and on to Harwich on 18 November. On the 17 December 1914 it returned to Hursley Park and came under command of 83rd Brigade in 28th Division. At some time, as a new recruit, Ernest would have joined his Battalion.

Ernest’s Medal Index Card shows that he was posted to France on 15 January 1915, which coincides with the date the Battalion was posted, landing at Le Havre the following day and then moved to concentrate in the area between Bailleul and Hazebrouck.

The 83rd Division first saw action in The Second Battle of Ypres, 22nd April – 25th May 1915, during which the 1st Battalion lost 476 Officers and men killed in action or died of wounds. The Battalion did not see major action again before it sailed from Marseilles for Salonika arriving on 7 December.

The War Diary states that about 9.00 p.m. on 5 July the Battalion relieved the 2nd East Yorks. Regiment in the trenches at La Clytte (about 5 mils [8 kms.] west of Ypres). They received notification that there would probably be heavy gun firing. The very detailed War Diary records that over the next three days the Battalion’s trenches were sporadically attacked with trench mortars, with a number of slight injuries caused. At 12.00 noon on the 7th the Diary records “… Casualties – other ranks killed 2, wounded 1 “ and at the same time the following day: “Casualties: 2/Lt. W.D. Bentall, 1st KOYLI wounded by rifle grenade. Not serious. Other ranks: killed one, wounded 3. “ 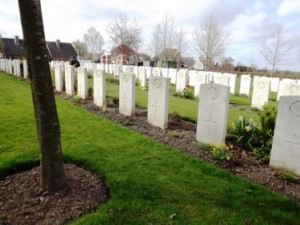 CWGC Records show that six of the Battalion, including Ernest, were killed on the 7/8 July 1915 and now lie together in Graves J. 40 – J.45 of Kemmel Chateau Military Cemetery. [‘The Register of Soldiers’ Effects’ records Ernest’s date of death “In Action” as “7/8 July“] In fact there were only two other men killed (both on the 14th) in the two weeks either side of Ernest’s death, he just seems to have been in the wrong place at the wrong time.

This entry was posted in K.O.Y.L.I., Kemmel Chateaus Cemetery, Lance Corporal and tagged Killed in Action. Bookmark the permalink.