Posted on 7th February 1917 by GrahamC

Harold was born in Horncastle, Lincolnshire on the 6 February 1887, the son of Charles William (Relieving Officer and Registrar) and Harriett (née Evison) Jackson.  He had one younger brother, Tom, and a younger sister, Alice. Harold’s mother died on 25 November 1889, a week after Tom’s birth, and in 1891 (Census RG 12/2578) the family were living at 3 Market Street, New Sleaford, Lincolnshire. 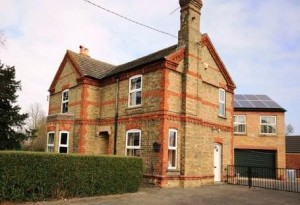 In 1896 Harold’s father re-married, Fanny Ernestine Marlow, and they had three children, Dorothy Ernestine, Dora May and John.

In 1901 (Census RG 13/3048) the family was living at Eastbridge House, Ruskington, Lincolnshire, and Harold was employed as a “Building Contractors’ Clerk”. 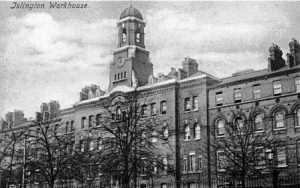 Postcard of Islington Workhouse, dated about 1910

In 1911 (Census RG 14/19618) Harold father, step-mother and half-brother and sisters were at the same address, but later moved to Ivy House, Ruskington.

Harold, however, had moved to London and was “Acting Master” of Islington Workhouse (Census RG 14/820).

His parents, however, remained in Ruskington until their deaths and they are buried side-by-side in Graves 24 and 26, Old East Border, Ruskington Cemetery. Charles William died in August 1934, aged 74, and Fanny Ernestine in July 1936, aged 76.

Harold was the husband of Annie Gertrude Jackson and at the time of his enlistment he/they were living in Ilford, Essex. However, Probate Records give his address at that time as Headington, Oxfordshire. He left his estate of £120 10s. 0d. (£120.50 a relative value of about £6,030 today [2015])

According to the SDGW database, Harold enlisted in the Bedfordshire Regiment in Bedford, but unfortunately, his Service Papers have been destroyed during a Second World War bombing raid. However, by comparing his Service Number with others of known date it appears he joined up about the end of November 1915.

His Medal Index Card also gives no indication when Harold entered the War, which tends to confirm, as he did not qualify for the 1914-15 Star, was after December 1915.

The 4th (Extra Reserve) Battalion was in Bedford at the outbreak of the War and was a training unit, it moved within a few days of declaration of war to Felixstowe, for duty with the Harwich Garrison, providing home defence around Harwich as well as drafts for the front line battalions.

On 25 July 1916, having been converted for war service the Battalion landed at Le Havre and came under orders of 190th Brigade in 63rd (Royal Naval) Division. It would seem likely that Harold would have gone to France with that original posting.

After its arrival in France the 4th Battalion was first engaged in The Battle of the Ancre, 13th – 18th November 1916, in which 86 Officers and Other Ranks were killed in action.

In 1917 they were involved in the continuing Operations on the Ancre, specifically at the actions at Miraumont in February. British operations on the Ancre from 10 January – 22 February 1917, forced the Germans back 5 miles (8.0 km) on a 4 miles (6.4 km) front, and eventually took 5,284 prisoners.

The Battalion War Diary for the period just before Harold was killed reads:

According to the Diary, during the whole of the Action at Miraumont (6 – 16 February), the 4th Battalion had” “Casualties Killed 68. Wounded 90. Missing 3. Missing believed Killed 45. ” CWGC Records for the same period show 65 Officers and men killed in action, though many more could have died of wounds or in captivity.

Harold was one of 14 who died on the 7th February, just 2 days into the action. He has no known grave and is commemorated with 29 of his comrades from that period on the Thiepval Memorial to the Missing on the Somme.

On the 24 February 1917 ‘The Lincolnshire Chronicle’ reported Harold’s death in action, and the following week, 3 March 1917, published his Obituary as follows:

” ROLL OF HONOUR – In our last issue we reported the death in France, on Feb. 7th, of Lance Corporal Harold Jackson. Since then the widow has received the following letter from the chaplain of the regiment to which the deceased belonged – ‘Dear Mrs. Jackson – I deeply sympathise with you in the great loss which you have sustained through the death of your husband. I knew him very well. He was a very capable man, and was getting on very quickly in this Battalion, where his high talents came to be recognized in a very short time. He spoke a great deal about you to me, and made me understand how much you were to him. And now comes your great loss. God has borrowed him, or rather taken him back from you-but it is not an absolute separation. Our loved ones do still know, and can no doubt help us.

I pray that Christ will give you of His strength to comfort and carry you through this sorrow. When the prospect looks black and hopeless (and when a joint life such as yours and his is suddenly severed it often does look black), try to think of all this. Remember also how bravely he did his duty (and I assure you that it requires great bravery to go through what he did in the days preceded his death), and, therefore, how he would like you to be brave and to bravely carry on. With much sympathy – Yours sincerely. T. Harold Davies, D.D., Chaplain (C of E), 4th Beds.’ “

This entry was posted in Bedfordshire Regiment, Lance Corporal, Thiepval Memorial and tagged Killed in Action. Bookmark the permalink.