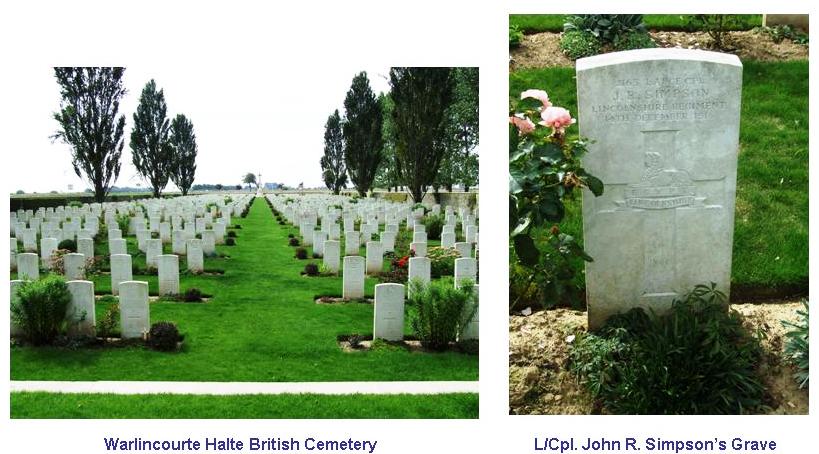 John was born at South Rauceby in the December quarter 1889. He was the son of Thomas (General Labourer) and Fanny (née Pattinson) Simpson and had an older sister, Sarah, an older brother, William, and four younger brothers, Henry, Arthur, Thomas and Joseph (1901 Census RG 13/3049), and two younger sisters, Hilda and Ada (1911 Census RG 14/19628). (Two other children of the family died in infancy.)

The 1911 Census shows that the family had moved to 8 Springfield Cottages, Sleaford, but John (listed as Robert) was boarding in the home of Elizabeth Myland (Widow) at 13 Clarina Street, Lincoln, working as a “Carter” (Census RG 14/19761).

In the September quarter 1911 John married the eldest daughter of the family, Patience Maud Myland, in Lincoln. They had two daughters, Hilda, born in the June quarter 1913, and Laura, in the March quarter 1915. [As John was posted to France on 1 March 1915, it is possible he never saw his youngest child.]

John’s Service Number suggests he enlisted at Lincoln on 4 August 1914 (the day Britain went to war with Germany). His Service Papers have not survived, however, his Medal Index Card indicates that he was posted to join the B.E.F in France on 1 March 1915, along with the rest of his Battalion, landing at Le Havre.

The 1/4th Battalion was formed as soon as War was declared, in Lincoln, as part of Lincoln & Leicester Brigade, North Midland Division. In May 1915 the formation was retitled as 138th Brigade, 46th (North Midland) Division.

On 7 January 1916 the Battalion moved with Division from Marseilles to Egypt, but almost as soon as they arrived – on 4 February 1916 it embarked at Alexandria and returned to France.

On the First Day of the Battle of the Somme the Division was engaged in a diversionary attack at Gommecourt (1 July 1916). However, the 1/4th does not appear to have been heavily involved, losing only 2 men on that eventful day.

Similarly, on the days prior to John dying from his wounds, three other men of his Battalion were killed in action. He is buried on Warlincourt Halte British Cemetery.  It was used from June 1916 to May 1917 by the 20th and 43rd Casualty Clearing Stations, and it could have been in one of these where John died from his wounds. 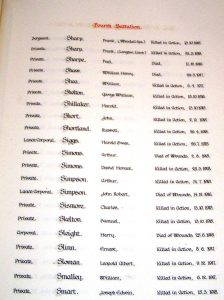 Although born near Ruskington in 1889, John’s family had clearly never lived in the village for any length of time. It is not surprising, therefore, that his name does not appear on any of the village’s ‘official’ Memorials.

He is, however, commemorated in Lincoln, at Lincoln All Saints’ Church, on the Lincoln City War Memorial,  in the Lincoln Memory Book and on the Lincolnshire Regiment Roll of Honour WW1 (right).

This entry was posted in Lance Corporal, Lincolnshire, Warlincourt Halte British Cemetery and tagged Died of wounds. Bookmark the permalink.