In 1901 (Census RG 13/3048) they were living on Silver Street, Ruskington, Lincolnshire.  In 1911 (Census RG 14/19618) the family were at the same address, however, Wainer was employed as a “Journeyman Butcher” by Alfred Sulley (Butcher) at Donington, near Spalding.

‘The Lincolnshire Chronicle’ [27 November 1915] reported that Wainer and his brother, Lance Corporal 2960 Charles Herbert KIRTON (right) had enlisted together in the 2/4th Battalion, Lincolnshire Regiment, in October 1914.

At that time Wainer was employed as a ‘Butcher‘ in Long Benington (a village 5 miles (8 kms) south of Newark-on-Trent. [Charles was “in the seed trade” in Derby.] 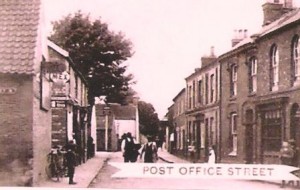 According to CWGC records, after the War Wainer’s father had moved to Post Office Street, Ruskington. Wainer’s mother, Mary Elizabeth, died, aged 65, on 26 May 1921, so possibly John moved after his wife’s death. Mary is buried in Ruskington Cemetery, Old Plot, East Border, Grave 59.

When Wainer’s father, John Thomas, died at the age of 82 on 3 February 1940, he was buried in the same Grave. However, about a year after Mary died, John had re-married, Ellen Elizabeth Daubney and after her death in January 1930, she was buried in the adjacent Grave 61. Their composite headstone also bears an inscription to commemorate Wainer (see below).

(N.B. Post Office Street has since been renamed Church Street. In the old postcard – above left – the white building in the distance on the left is where the Library now stands. At that time cottages were found there.)

According to the SDGW database, Wainer enlisted in Lincoln, but unfortunately, his Service Papers have been destroyed during a Second World War bombing raid. As stated above ‘The Lincolnshire Chronicle’ [27 November 1915] reported that Wainer and his brother, Charles had enlisted together in the 2/4th Battalion, Lincolnshire Regiment, in October 1914. Charles’ Medal Index Card shows that this was, in fact, 14 October 1914. At some time later Wainer must have transferred to the 10th Battalion Essex Regiment.

The 2/4th Battalion, Lincolnshire Regiment, was formed in Lincoln on 13 September 1914 as a Second Line Battalion. In July 1915 it was attached to 177th Brigade, 59th (2nd North Midland) Division and the following April (1916) it moved with Division to Ireland and took part in actions against rebellion. The Battalion was not posted to France until January 1917, by which time Wainer had been killed serving in the Essex Regiment.

In April 1916 the 58th Division was hurriedly ordered to Ireland to assist in quelling troubles that broke out in Dublin and elsewhere. Severe fighting took place in the battle against the Irish nationalist forces. The Division’s first battle casualties were incurred. Once things had settled down the units moved from Dublin to the Curragh.

A large draft of men of the 2/4th were transferred to other Units in preparation for The Battle of the Somme in June 1916 and this could have been when he moved Regiments and was re-numbered.

The 10th (Service) Battalion, Essex Regiment. had been formed at Warley in September 1914 as part of K2 (Kitchener’s Second New Army) and came under orders of 53rd Brigade in 18th (Eastern) Division. The Battalion moved to Shorncliffe and then Colchester, going on to Codford St Mary in May 1915. Shortly afterwards, on 26 July 1915 it landed at Boulogne, the and the Division concentrated near Flesselles.

During The Battle of the Somme, 1st July– 18th November 1916, Wainer’s Battalion saw action at the following engagements, all parts of the overall battle:

Wainer was killed in action on 22nd October 1916 and the War Diary shows that his Battalion had been moved into the front-line in the Courcelette sector on the 17th. Between 21 – 23rd October they were in action at Regina and Stuff Trenches, before being relieved and moved to Albert.

N.B. Regina Trench (Staufen Riegel) was a German trench dug along the north-facing slope of a ridge running from north-west of the village of Le Sars, south-westwards to Stuff Redoubt (Staufenfeste), close to the German fortifications at Thiepval. It was the longest such trench on the German front during the War.

Wainer was one of 32 men of the 10th Battalion killed in action during these three days, mostly (22) on the 21st. He has no known grave and is commemorated, with his comrades on the Thiepval Memorial to the Missing on the Somme. 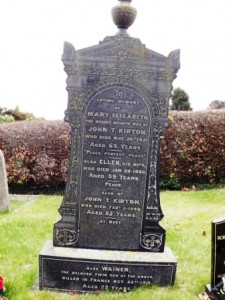 As well as being commemorated on the Thiepval Memorial, Wainer is commemorated on his parents’ grave in Ruskington Cemetery, Old Plot, Grave East Border 59.     The inscription reads:

This entry was posted in Essex Regiment, Lance Corporal, Thiepval Memorial and tagged Killed in Action. Bookmark the permalink.