William as a Schoolboy

Family sources state that the photo on the right was taken at the back of his uncle and aunt’s house on Tentercroft Street, Lincoln. William’s cousin was also in the full copy of the photo.

Family sources also suggest he was ‘.. a bit of a lad .. ‘ as tales of “Willie” Morley followed him down the generations. William’s Medal Index Card confirms that after the War his father was living in Ruskington, Lincolnshire.

Unfortunately, William’s Service Record is unavailable, but he had been serving as Private 1521, 2/1st Lincolnshire Yeomanry. Another man with a near adjacent service number (Private 1524 Herbert Thompson) enlisted at Lincoln on 4 March 1912, so William must have enlisted about the same time.

The Yeomanry was formed on the creation of the Territorial Force in April 1908 and placed under orders of the North Midland Mounted Brigade. It was headquartered in the Old Barracks in Lincoln with the squadrons being headquartered in four locations. Bearing in mind where he lived, William would have been in ‘C’ Squadron: Lincoln (Sleaford, Gainsborough, Market Rasen, Wragby). 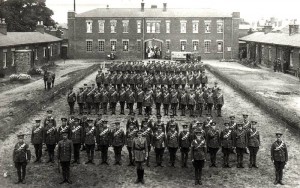 When War was declared the 2/1st Lincs Yeomanry formed in September 1914 as a “second line” (training, draft-supplying reserve) for the 1/1st Bn and came under orders of the 2/1st North Midland Mounted Brigade.

In October 1915 William’s Battalion moved with the Brigade to Norfolk and was placed under orders of 1st Mounted Division, replacing 1/1st North Midland Mounted Brigade when it left for Salonika.

His MIC reads: ” Also served in Italy; and in England with Lincs Yeomanry. ” The 2/1st Lincolnshire Yeomanry was based in the UK for the duration of the war and William did not serve overseas until his transfer to another regiment.

William’s Medal Index Card shows that he transferred to Surrey Yeomanry on 25 December 1915 ( London Gazette 1 January 1916) and joined his Unit in France on 24 September 1917. The nominal roll of Officers who served with 10th Queen’s, held at Surrey History Centre (reference: 8227/1/10), also shows that Lt. W. Morley was posted to the Battalion from the Surrey Yeomanry on 24 September 1917. He was one of 129 from the Yeomanry sent to reinforce the 10th Queens.

The 10th Battalion, Queens (Royal West Surrey Regiment), to which William was attached, had been formed at Battersea on 3 June 1915, by the Mayor and Borough of Battersea and came under the command of 124th Brigade, 41st Division.

On 7 November 1917 the Division was notified that it was to be transferred to Italy. The move (by train) began five days later and by 18 November all units had concentrated north west of Mantua. The Division took over a sector of front line behind the River Piave, north west of Treviso, between 30 November and early on 2 December.

The History (see ‘Sources‘ below) suggests that the move to Italy was unexpected. Although less than 200 men of the original Battalion survived, having been reinforced from a variety of other Regiments up to full strength (931 Officers and men), it was fully expected it would return to The Somme.

On 28 February 1918 the Division concentrated in Campo San Piero, preparatory to returning to France. By 9 March it had completed its move and was concentration near Doullens and Mondicourt. Three men of the 10th Battalion died in Italy during this period.

The War Diary of the 10th Battalion, Royal West Surrey Regiment for the 21st March 1918 reads:

“ Warning order was received that Bn. would entrain for ACHEUX area & probably billet at SENLIS & continue training. … The Bn. entrained at SAULTY. News was heard that a large German offensive had begun & that many places many miles back had been shelled, it was soon found that the destination had been changed from ALBERT to ACHIET-LE-GRAND. The Bn. detrained at about 1.30 a.m. & marched to camp at FAVREUIL. “ However, the report relating to the late March 1918 period is missing.

The reference to the large German offence was undoubtedly ‘Kaiserschlacht’  – the first day of the German Spring Offensive on 21st March. The Battalion History (see ‘Sources‘ below) does however give an account of the ensuing Battle, which can be paraphrased as follows:

“ The 10th Queen’s arrived at Achiet-le-Grand at 1.30 a.m. on 22 March and dug in Nort-east of the village of Beaunâtre, holding the Vaulx-Vraucourt road. The Battalion held this position all day under moderate shelling which “… caused half a dozen casualties. “

About midnight the Battalion was ordered to relieve the 20/Durham Light Infantry (DLI) to the right. However, the 1/7th Cheshires were on the right and the DLI on the left – with no other British units ahead of them.

After a quiet night, about 8.00 a.m. on the 23rd the enemy attacked in two waves from the direction of Vaulx-Vraucourt, but were stopped by artillery and rifle fire. A further attack at 11.00 a.m. was also stopped and after a lull attacked again, this time pushing two machine guns into position in front of ‘D’ Company’s position. (N.B. ‘D’ was William’s Company.)

A Vickers gun dealt with the attack on ‘D’ Company which petered out about 6.00 p.m., but not before the C.O., Lt.-Col. Clark, had been wounded. Another relatively quiet night followed until about 1.30 a.m. when a heavy enemy bombardment fell on the front line and support trenches.

After about 2 hours this stopped and a strong infantry attack was launched on the Battalion’s front and right. The 1/7 Cheshire began to withdraw, as did some of ‘B’ Company, Queen’s, to prevent being outflanked. ‘A’ and ‘C’ Companies held on for a while longer but were eventually also forced to withdraw. The Germans had took over a number of British positions and were able to inflict “.. severe casualties …” on the retiring Battalion.

Shortly afterwards the 10th Battalion regrouped and, supported by 26/Royal Fusiliers, counter attacked to occupy the original front line, but orders were then received to withdraw again. During the following day, the 25th, a further withdrawal took place to a line between Bihucourt and Achiet-le-Grand. ”

The 124th Brigade War Diary mentions a list of casualties and that the 10th Queens (Royal West Surrey) Regiment suffered many casualties: ” 20 Officers lost, 33 men killed, 184 wounded, 148 missing. ” In the Battalion War Diary Summary for the month of March 1918, Major Eric Thesiger compares the relative strength of the Battalion at the beginning – 44 Officers and 858 Other Ranks – with the end – 28 Officers and 516 men.

CWGC Records show 61 men of the Battalion who died in the same period, 59 between 21 – 27 March. William was initially reported missing near Beaunâtre and was deemed to have died (killed in action) on 24th March 1918. He has no known grave and is commemorated on the Pozières Memorial, which is a little strange as 55 of the 10th Battalion’s casualties in March 1918 are listed on the Arras Memorial.

He was one of 38 Great War casualties of Dauntsey’s School, West Lavington, and his name also appears on the School’s Roll of Honour and its War Memorial. 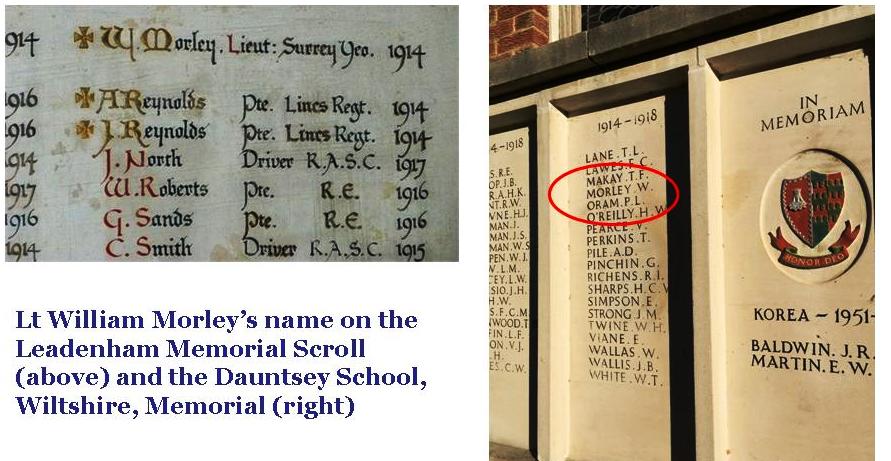 This entry was posted in Lieutenant, Pozières Memorial, Surrey Yeomanry. Bookmark the permalink.