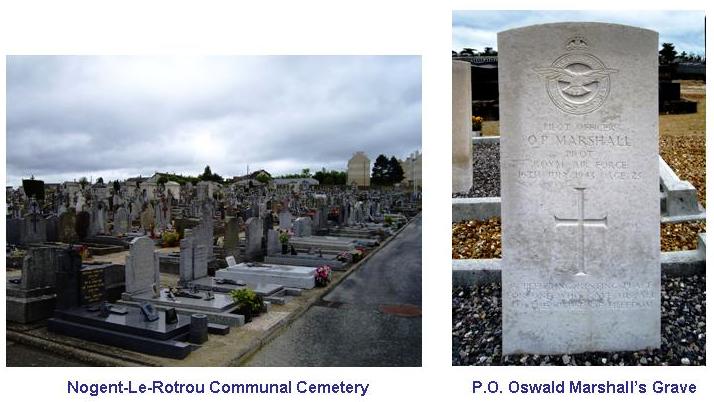 Oswald was born on 17 July 1920, the son of John Oswald and Harriet Ann (née Gadd) Marshall, of Ruskington, Lincolnshire. He had an older brother, John Miller and a younger brother, Derek.

When War was declared in 1939 Oswald was employed as a ‘Clerk Local Government‘ and the family were living on the corner of High Street and Church Street where father John had a Motor Mechanic business.

His parents remained in the village and are buried together in Graves 57 and 58, Ruskington Cemetery, New Plot, Section E. Harriett was 80 when she died in July 1968 and John Oswald 90 on his death in April 1979. [Oswald’s brother John was buried in Grave 59 alongside them after his death in June 1981, aged 64.]

Without his Service Papers it is not known when Oswald volunteered for the Royal Air Force. He qualified for Bomber Command and was posted to RAF Breighton.

RAF Breighton is located six miles north-east of Selby between Breighton village and the B1228 from Howden to York, work on this bomber station started late in 1940 and took just over a year to complete.

On the night of 15/16 July 1943 Oswald was flying in a Halifax, Type II, Serial number DT768 and code EY-W, out of RAF Breighton for a mission to Montbeliard in France. At 22.20 on the 15th Oswald’s plane crashed near the village of Nogent le Rostrou, France. He is buried in the local village Cemetery.

The Official record of the loss read:

” Took off at 2220 from Breighton in Halifax II DT768 EY-W for Montbellard. Crashed, due to engine trouble, at Nogent-le-Rotrou (Eure-et-Loir) France, where the two airmen who died lied in the Communal Cemetery [4 P.O.W’s and 1 evader] “

Buried alongside Oswald is Flying Officer 125422 Norman Stewart Matthew REID, Bomb Aimer, also of 78 Squadron, who died in the same plane. Other members of the crew seem to have survived.

N.B. Five other men lie in this village Cemetery, 2 more from the R.A.F. and 3 airmen of the Royal Canadian Air Force. They all belonged to the 50th (R.A.F.) Squadron, so presumably died together in the same plane on 25 July 1944. They now lie together in Plot 33. Collective Grave 4-7.