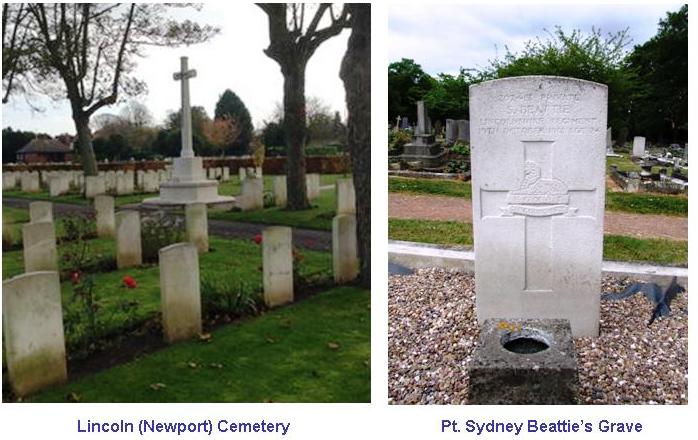 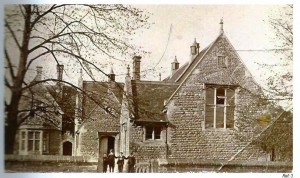 In 1911 (Census RG 14/19618) the family were at the same Ruskington address, in the house alongside the School where Sydney’s parents were teachers.

[N.B. The postcard left dates from about 1920. The School House is on the left.]

Sydney enlisted in the 4th (Territorial Force) Battalion of the Lincolnshire Regiment on or about 25 July 1916 (according to his Service Number) at Newport, Monmouth. At the time he was resident in Ruskington, Lincolnshire.

The 3/4th Battalions was initially formed at home bases on 1 June 1915 and on 8 April 1916 it became the 4th Reserve Battalions. This was a training and recuperation unit, and never as a unit went overseas – so there is no diary and very little information. When a man was fully trained or fully fit, he was transferred to one of the four active territorial units.

His 1/4th Battalion had originally landed at Le Havre on 1 March 1915, and on 7 January 1916 moved with the Division from Marseilles to Egypt. On 4 February 1916 it embarked at Alexandria and returned to France. Sydney has no Medal Index Card, so did not see service overseas, nor have his Service Papers survived.

His Records show that on the 19 October 1918 Sydney ‘Died‘ in the Military Hospital, Lincoln, whilst based at the 4th Battalion ‘Depot’. The Battalion had their Headquarters at the Drill Hall, Lincoln. After the War Sydney’s mother, Louisa, received a small pension for the loss of her son. The Pension Records Card gives the cause of death as “pneumonia“, quite possibly as a result of the influenza epidemic rife at the time. 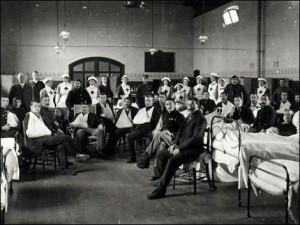 It held 41 Officer and 1,126 Other Ranks beds with over 45,000 men being treated there during the war. Lincoln (Newport) Cemetery, near the hospital, contains 139 First World War burials.

Sydney was buried on the 23rd in what is now the CWGC Plot in Lincoln (Newport) Cemetery. The Cemetery also contains the grave of Cpl. Charles Richard Sharpe, 2nd Battalion, Lincolnshire Regiment, who was awarded the Victoria Cross on 9 May 1915. He died of natural causes on 17 February 1963.

This entry was posted in Lincoln (Newport) Cemetery, Lincolnshire, Private and tagged Died. Bookmark the permalink.