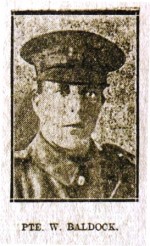 Walter was born in the September quarter 1887 at ‘The Drove’, North Kyme, Lincolnshire, the son of William (Farmer) and Mary Ann (née Portas) Baldock. He had two older brothers, William and Joseph, and two older sisters, Charlotte and Jane. (1891 Census RG 12/2577) 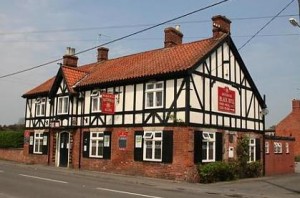 In 1911 (Census RG 14/19618) the family were living at Wolseley Villa, Jubilee Street, Ruskington, and Walter was employed as a “Farm labourer”.

Walter lost both his parents in his early 20s, Mary in December 1913 and William in November 1915 when he (William) was living in Silver Street, Ruskington. They are buried together in Graves A. 266 and 267, Ruskington Cemetery, Old Plot.

The Register of Soldiers’ Effects authorised to brother John, half brothers William & Thomas, sisters Mrs. Charlotte Snowden and Mrs. Jane Tory; half-sister Mrs. Ellen Williamson and brother-in-law William Williamson, the sum of £4 1s 10d each, representing his total effects of £24 11s 1d [£24.56 – this has a relative value of about £1100 today (2016)]. Later a War Gratuity of £17 was paid to his male relations. [£17 is worth about £760 today.]

When War broke out Walter enlisted at Lincoln and at the time was living in Sleaford, Lincolnshire. ‘The Lincolnshire Chronicle’ [27 November 1915] reported that he was originally in the 6th Battalion, Lincolnshire Regiment, and trained at Belton Park, before being transferred to Basingstoke. At that time [1915] he was a “shoeing smith” in the transport section.

The 6th (Service) Battalion had been formed at Lincoln in August 1914 as part of K1 (Kitchener’s 1st New Model Army) and came under the command of 33rd Brigade in 11th (Northern) Division. The Battalion moved to Gallipoli in July 1915, but as Walter was still in England in November 1915, likely as not he had by then transferred to the 1st Battalion.

Sadly his Service Papers have not survived but his Medal Index Card indicates he did not enter France until after 1915, as he was not awarded the 1914-15 Star Medal. A report in ‘The Lincolnshire Chronicle‘ (see below) however, gave his date of his entry into the War in France as May 1916.

The 1st Battalion was stationed in Portsmouth in August 1914, part of 9th Brigade, 3rd Division. It was sent straight to The Front, landing at Le Havre on 14 August 1914. The brigade was attached to 28th Division between 17 February and 2 April 1915. On the 14 November 1915 the Battalion transferred to 62nd Brigade, 21st Division.

Walter joined his Battalion in preparation for the Battle of the Somme, (1st July – 18th November 1916). During this Battle the 1st Lincolnshires were in action at several engagements :-

On 5 August 1916, ‘The Lincolnshire Chronicle’ carried the following report:

” WOUNDED – Mrs., Keyworth, High Street North, has received a letter from her brother, Pte. Walter Baldock, of the Lincolnshire Regiment, that he had received a shrapnel wound in his knee, and was at present in hospital in Leicester, where he is progressing favorably. He joined the Army when war broke out, and went to France in May last. ”

It is not known when Walter re-joined his Battalion, but during 1917 the Battalion saw action during the German retreat to the Hindenburg Line and also:

In 1918 the 21 March marked the first day of the German Spring Offensive – ‘Kaiserschlacht’  – which developed into the Battle of St Quentin, 21st – 23rd March 1918. On the final day of this operation Walter was killed in action.

Strangely, the Battalion War Diary for the period of 1st to 21st March 1918 was captured by the Germans and so later in the month a handwritten review of events was prepared. This shows that in the early part of the month the Battalion was engaged in digging and strengthening trenches around Vaucelette Farm and fitting up wire. [Vaucelette Farm is near the village of Epehy, 26 kms. NNW of St. Quentin and 20 kms. SSW of Cambrai.]

On the 17th/18th March Walter’s 1st Battalion relieved the 2nd Battalion to the left of the line, responsible for the defence of Chapel Hill. High Command had predicted a German attack for the 20th/21st, and two tanks were brought up for a counter-attack.

The modified Diary reads: “21 March 1918 – At 4am on 21st a heavy bombardment was opened on our front. It was realised at once that it was the prelude to a ground attack. Gas was used during the earlier hours of the bombardment. A heavy white mist made visibility extremely difficult.

“D” Company held Skittle Alley and Tennis Trench throughout the day protecting their right flank which was threatened from Vaucelette Farm. “C” Company held Chapel Street which was now severely attacked. “A” Company in Cavalry Trench and Cavalry Support were outflanked by the enemy. Those that escaped made their way on to Chapel Hill which was held throughout the day. About 3am the battalion was relieved by a battalion of the South Africans who gave up Chapel Street and Tennis Trench.”

The following day, 22nd, the Battalion moved to relieve troops at ‘Pioneer Camp’ on the Heudicourt-Saulcourt Road, but around noon were ordered to man the ‘Brown Line’ to enable troops retiring from the ‘Yellow Line’ to pass through. By 4.00 p.m., however, a full scale retreat was in progress and the 1st Battalion withdrew to positions on the ‘Green Line’, closely pursued by the enemy.

However, the Green Line was not completed and only “.. a foot deep [32 cm.]. To retire from this line it was necessary to climb up a steep hill in the open without any cover. In fact it was an almost impossible line to hold. The men were all dog tired. ”

At about 8.30 a.m. on the 23rd March, the day Walter was killed in action, the Battalion was ordered to retire from the Green Line to Midinettes, about 2000 yds. [1.83 kms.] and shortly afterwards were forced out of the line.

The account of the action goes on: “Heavy casualties were inflicted on our troops during the retirement. Fighting a rearguard action the Bn. made its way back to Midinettes Trench which was an old German line with the wire behind instead of in front of us. The trench itself was a good one and the field of fire very fair. At about 12 noon the C.O. was wounded.

A stand was made in this position until about 3.00 p.m. when the troops on our left gave way. The Battn. Then retired under heavy machine gun fire through Haut Allaines. The men were very tired and much scattered. About 40 men under Captain D.F. Nielsen, M.C. held a line in front of Bouchavesnes during the night. The remainder of the Battn. spent the night in small parties in the vicinity of Maricourt. “

So depleted was the 1st Battalion that two days later, on the formation of a composite Battalion with other Regiments, it could only muster 200 men – enough for one Company of four Platoons.

Commonwealth War Graves Records show that Walter was one of 89 Officers and men of his Battalion killed during the three days of the Battle – 79 on the 21st. All but six have no known grave and are commemorated with him on the Pozières Memorial.

This entry was posted in Lincolnshire, Private, The Pozières Memorial and tagged Killed in Action. Bookmark the permalink.