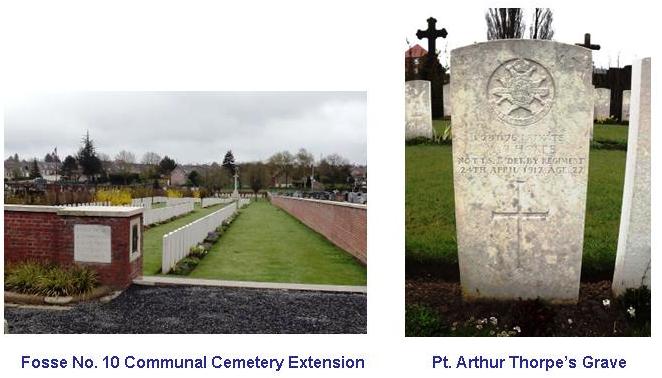 By then, however, Arthur had moved to live at Helpringham, near Sleaford, lodging with the Motley family and working as a “Waggoner on Farm”. (Census RG 14/19640) His Obituary (see below) tells us that at the time of his death he was engaged to “Miss Lethbridge“.

The 1/6th Battalion, Sherwood Foresters, was a Territorial Force Battalion formed after the 1909 reforms from the Derbyshire Volunteers. It drew mainly from the North and North East of Derbyshire and Companies were recruited in country towns such as Chesterfield, Buxton,  Chapel-en-le-Frith, Matlock and Wirksworth, or in small mining villages such as Peak Dale, Dove Holes and Clay Cross.

In August 1914 the Battalion was based in Chesterfield, part of the Notts. and Derby Brigade in the North Midland Division. It moved on mobilisation to Harpenden and went on in November 1914 to Braintree. The 1/6th landed in France on 25 February 1915, and on 12 May 1915 the formation became the 139th Brigade in 46th (North Midland) Division.

Unfortunately, Arthur’s Service Papers have not survived, but it is known that he enlisted at Chesterfield and his Obituary gives the date as February 1915. His Medal Index Card shows he was posted to France on 28 October 1915, clearly as a reinforcement/ replacement. Arthur’s original Service Number (3703) confirms that he enlisted in February/March 1915.

On the first day of The Battle of the Somme (1st July 1916) Arthur’s Battalion launched a diversionary attack at Gommecourt ). Read more about this Battle on the ” Chesterfield Sherwood on the Somme ” website. In this action Capt. John Leslie Green won the Victoria Cross.

In 1917 the Brigade were in action during Operations on the Ancre (March); Occupation of the Gommecourt defences (4th March); The attack on Rettemoy Graben (12th March).

On 19 April 1917 the War Diary shows that the Battalion was at Fosse 3 near Lievin and relieved the 5th Battalion, Northants Regiment, (‘A’ and ‘B’ Companies in the front line and ‘C’ and ‘D’ Companies in support). The following morning: “ The Battalion attacked in conjunction with 8th Sherwood Foresters. “

Three days later, on the 23rd, the Battalion attacked Fosse No. 3, at Lievin, again and the Diary records that 1 Officer, Lt. Cecil Arthur Brown, and 21 other ranks were killed, 5 other Officers and 71 other ranks wounded, and three other ranks missing. [For his actions Lt. Brown was recommended for the Military Cross for gallant and distinguished service in the field. Read more of the details of this action on Lt Brown’s page on the Buxton War Memorial website.]

An account of the attack in the Battalion History (see Sources below) reads:

“ In the 6th Battalion “C” Company under Captain Johnson was to attack with “D” Company (Captain Jackson) in support, and “A” (Captain Robinson) in reserve, and directly the companies advanced the enemy put down a very accurate barrage, which began at the east end of the group of houses and moved gradually up to and remained concentrated on the west end. The number of guns used for the purpose of this barrage was not especially great, but on the other hand, machine guns commanded and fired down all approaches to the enemy position. “ [Lt. Col. Cyril Benton Johnson, was, like Lt. C.A. Brown, a resident of Buxton, Derbyshire. He too was killed in action a few months later, on 21 September 1917. You can read about his career Service also on the Buxton War Memorial website.]

In his report the Brigade Commander wrote:- ” I consider that all ranks of the attacking companies did all in their power to reach their objectives, and that it was no fault of the leading of the Officers and non-commissioned Officers, or of the spirit of the men, that the attack failed. ”

CWGC Records show 1 Officers and 24 men killed in action on the 23rd and Arthur dying of his wounds the following day. This agrees entirely with the War Diary, assuming the three ‘missing’ men all killed. 19 of the men have no known grave and are commemorated on the Arras Memorial.

Arthur is buried in Fosse No 10 Communal Cemetery Extension, Sains-En-Gohelle. The Extension is on the South side of the Communal Cemetery and was begun in April 1916 and used continuously (chiefly by Field Ambulances) until October 1918. 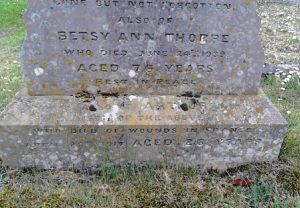 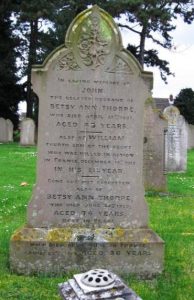 Arthur and his brother, William, are both commemorated on their parents’ Grave (Plot B, Graves 122 and 123) in Ruskington Cemetery. Arthur’s name is somewhat obscured by the moss and lichen on the lower part of the plinth.

On the 19 May, 1917, ‘The Lincolnshire Chronicle’ printed the following Obituary for Arthur:

” ROLL OF HONOUR – Mrs. John Thorpe, Silver Street, some days ago received an official intimation that her third son, Pte. Arthur Thorpe, had died from wounds in France. This young man was only 27 years of age, and joined the Notts and Derby Regt. At Chesterfield in February 1915, and after training went to France in October of the same year, and had not been home on furlough since that date. In civil life he was a platelayer on the railway at Calow.

The following letter has been received by the fiancé of young Thorpe from his Co. Sergt, Major; “Somewhere in France, April 26th, 1917. Dear Miss Lethbridge, It is with deep regret I have to inform you that your fiancé, Arthur Thorpe, has passed away. We were making an attack in the evening on a very strong position, when a shell burst near him, and he has died from wounds. We only had notification of his death yesterday and the attack was made on the 23rd inst. There is one consolation to you in your sad loss, and that is that Arthur died whilst fighting for his country. He will be very much missed by the whole of his platoon, as he was such a cheerful companion. They all share with me and wish to send you our deepest sympathy. I remain, yours respectfully M. J. Unwin, Co.-Sergt. Major.”

The bell ringers paid the usual compliment in memory of, the gallant young soldier by ringing a muffled peal on Tuesday evening. The greatest sympathy is felt for Mrs. Thorpe in her great sorrow, as this is the second son she has lost in the war, her other son, William, being killed in December, 1915. “

This entry was posted in Fosse No 10 Communal Cemetery Extension, Private, Sherwood Foresters (Notts and Derby Regiment). and tagged Died of wounds. Bookmark the permalink.