Posted on 2nd October 1917 by GrahamC

The Wainer family are long established in the village of Ruskington. According to his enlistment papers, Arthur was born on the 3rd December 1894, the youngest child of Tom (Bricklayer) and Ellen (Helen) [née Prince] Wainer. He had nine older brothers and sisters, Annie Mary, Florence Helen, Elizabeth, Tom Prince, John Richard, William, George Frederick, Rebecca Louisa and Nellie. (Annie Mary and Elizabeth both died in infancy and are buried together in the Parish Churchyard, near the SW Wall.) 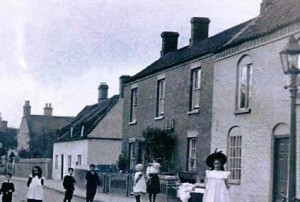 By 1911 (Census RG 14/19618) they had moved to High Street North, Ruskington, although Nellie and Arthur were the only children still living with their parents.

Arthur was working as a “Bricklayer’s Assistant”, no doubt with his father, however, his mother died in the December quarter 1914 and East Border of Ruskington Cemetery, Old Plot, Graves 56.

Arthur enlisted at Ruskington, Lincolnshire on 8 December 1915 and was immediately posted to the Reserve, where he remained until he was mobilised on the 4 January 1917. He was posted to the Royal Engineers on the 7th, at the Lincolnshire Regiment Depot, for assessment. This was recorded as “unsuitable”, as he failed the eyesight test, and on the 13th and he was re-posted to the 3rd Training Reserve the next day.

Arthur was eventually posted to France on 26 April 1917, embarking from Folkestone and landing at Boulogne the following day. He was posted initially to the 31st Base Battalion, Northumberland Fusiliers at Étaples on 27 April 1917, but two weeks later, on 12 May 1917, he was transferred again, this time to the 8th Battalion, York and Lancaster Regiment.

The 8th (Service) Battalion had been formed at Pontefract in September 1914 as part of K3 (Kitchener’s Third New Army) and came under orders of 70th Brigade in the 23rd Division. The Battalion moved to Frensham, and on to Aldershot in November and on to Hythe in February 1915 and in May to Bordon.

The Battalion was posted to France and landed at Boulogne on 27 August 1915. On 18 October 1915 it  transferred with its Brigade to the 8th Division. On the first day of The Battle of the Somme (1 July 1916) The 8th York and Lancaster Regiment took 680 men and 23 Officers over the parapet, all the Officers were either killed or wounded and of the Battalion only 68 returned. The Battalion had effectively ceased to exist as a fighting unit and was withdrawn that evening. On 17 July 1916 it returned with Brigade to 23rd Division.

A month after joining his Battalion, on 8 June 1917, Arthur was wounded, receiving a gunshot wound to his back. He was admitted to the 12th Casualty Clearing Station at Needinghem on the 14th, transferring to the 2nd Canadian General Hospital at Le Tréport a week later (21st). During this Battle (Messines) his Battalion suffered 74 Officers and men killed in action and died of wounds, most, 63, on the 7th and 8th, when Arthur was wounded.

On 28 September the Battalion relieved the 11th Sherwood Foresters in the front line and the next day enemy shelling led to 4 Other Ranks killed and 12  O.R. wounded. The War Diary for the next two days, 1st – 2nd November reads: 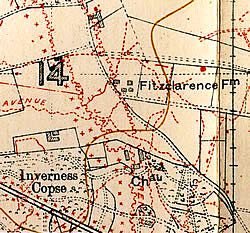 and kept it up until 5.45 a.m. when it was lifted to the area – TOWER: B.H.Q – INVERNESS COPSE. It slackened somewhat at 7.00 a.m. but the area was heavily shelled throughout the day, and the artillery did not quieten until 6.30 p.m. Two of our dugouts were destroyed. Another barrage was put along the line TOWER – B.H.Q – INVERNESS COPSE at 7.15 – 7.30 p.m. and the S.O.S. was fired by the unit on our left, the 9th Yorkshire Regt.

2nd October 1917 – Another practice barrage, to which the enemy replied very forcibly. His shelling seemed to miss our front line, but his shooting on the support and reserve lines was very accurate. Enemy sniping active. Our trenches were improved and firestepped. Parties of the enemy were seen on the ridge in front of J.15.d.6.5. carrying timber and stores and were sniped.

There was desultory shelling throughout the day. At 7.10 p.m. the S.O.S. was fired by the Australians on the left, and immediately our artillery responded the enemy commenced to shell our support area and reserve lines very heavily until 9.00 p.m. This shelling was particularly severe, and postponed the relief by the 2nd K.O.S.B. which should have commenced at 8.00 p.m. However at 9.00 p.m. the relief was proceeded with and completed by 1.15 a.m. ”

CWGC Records show that the 8th Battalion suffered 11 losses, killed in action, between 30 September and 3 October 1917, including Arthur. All but one, like Arthur, have no known grave and are commemorated with him on the Tyne Cot Memorial.

On the 3 November 1917 “The Lincolnshire Chronicle” printed the following tribute to Arthur:

” ROLL OF HONOUR – Yet another old Ruskington boy has paid the extreme penalty for his King and Country, Mr. Thomas Wainer, stonemason, High Street, received official notice from the War Office that his youngest son, Pte. Arthur Wainer, of the Lincolns, had been killed in action in France. He was only 22 years of age.

MUFFLED PEAL – On Sunday morning a muffled peal was rung on the Church bells in honour of the memory of Ptes. Fred Whitton and Arthur Wainer, who had recently been killed in action. “ 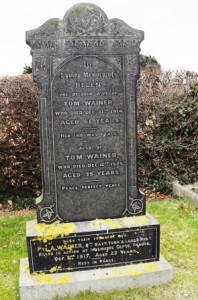 The inscription on the base of his parents’ grave states that Arthur was: “Killed in Action at Inverness Copse”. 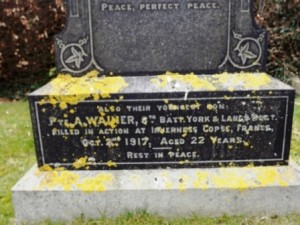 This entry was posted in Private, Tyne Cot Memorial, York and Lancaster Regiment and tagged Killed in Action. Bookmark the permalink.