Posted on 29th September 1918 by GrahamC 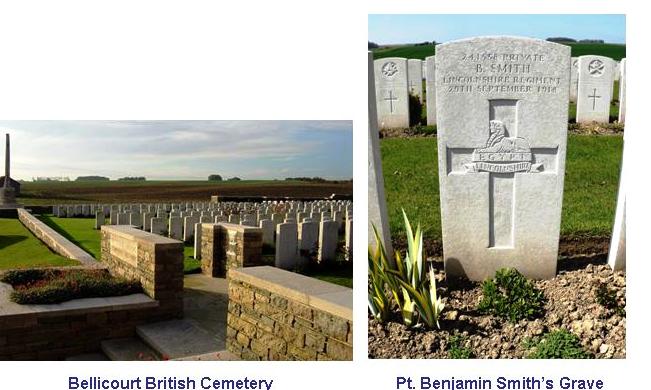 Benjamin was born in Anwick, Lincolnshire in the June quarter 1892, the son of Francis [Frank] (Farm Worker) and Jane (née Brant) Smith. He had an older sister, Annie Marie, and three younger brothers, Francis, William Brant and Joseph Edward.

(N.B. Private CH/18328 William SMITH joined the Royal Marines in January 1914 and was training in Deal, Kent when War was declared. According to ‘The Lincolnshire Chronicle’ [27 November 1915] at that time he was based in Glasgow.)

Benjamin’s Service Papers are not available having been destroyed during Second World War bombing. The SDGW database shows that he enlisted at Sleaford, Lincolnshire. By comparing the Service Records of men with adjacent Service Numbers, it seems highly likely that Benjamin attested as part of the “Derby Scheme“, on or about 11 December 1915.

The Derby Scheme was an attempt to recruit further men into the Services. The Earl of Derby introduced the scheme in October 1915, whereby men could volunteer for the forces. They completed one day’s service and were the placed on reserve. They went home and waited to be called upon when they were needed.

about the Derby Scheme.

In keeping with the group with similar Service Numbers, it appears that Benjamin was mobilised at Lincoln on 9 February 1916 and from then until the Battalion was posted to France on 23 February 1917 was engaged in ‘Home Service’, which included Service in Ireland. As detailed below he returned to England in January 1917, prior to posting to France.

In April 1916 the Division was hurriedly ordered to Ireland to assist in quelling troubles that broke out in Dublin and elsewhere. Severe fighting took place in the battle against the Irish nationalist forces. The Division’s first battle casualties were incurred, although CWGC Records show no deaths in this period. Once things had settled down the units moved from Dublin to the Curragh.

The 2/5th Battalion was only partly formed in 1916 when they went to Ireland to help suppress the Easter Rising. Their strength was approximately 500. On their return in September 1916 they were brought up to strength with recruits mainly from London and the North East. The ratio was roughly 65/35 Lincolnshire men to others

In January 1917 it returned to England and was posted to France the following month, 17 February, and completed concentration at Mericourt on 3 March. Reports said that the Division could not be considered properly trained (largely as it had been split up in Ireland) but it did not have any opportunity to add to its training before it was thrown into the front line south of the Somme, near Estrees.

During The Third Battle of Ypres, (31st July – 10th November 1917) the Battalion saw action at The Battle of Polygon Wood, 26th September – 3rd October. In the first two days of the second of these two engagement the 2/5th Battalion lost 69 NCOs and other ranks. Most of these men (40) have no know grave and are commemorated on the Tyne Cot Memorial.

After a long period of rest and training, the Division took over the front line at Bullecourt on 11 February 1918, with HQ being established at Behagnies.  Benjamin’s 177th Brigade were next in action at The Battle of St Quentin, 21st – 23rd March 1918. After suffering heavy casualties from German shellfire on 21 March, the enemy infantry succeeded in breaking through the Division’s position where it met that of 6th Division in the valley of the River Hirondelle. Parties held on and continued to resist but were gradually destroyed and “mopped up”. The 2/5th Battalion had 50 Officers and men killed on that day. Only 5 men have a known graves, the remainder are commemorated on the Arras Memorial.

On 13 April, the Division was ordered to reinforce the Lys area that was under terrific enemy attack. 177th Brigade was split off to reinforce 19th (Western) Division north of Neuve Eglise (Nieuwkerke), while the rest moved to Westouter. In what was later called The Battle of Bailleul, Benjamin’s Battalion had another 74 men killed on the 15th April. As with the earlier Battles 69 have no known grave, commemorated on the Ploegsteert Memorial.

The 1/5th Battalion was in Grimsby when War was declared, part of Lincoln & Leicester Brigade, North Midland Division. On 1 March 1915 the Battalion landed at Le Havre, the first complete Territorial Force Division to arrive in France. In May 1915 the formation was retitled as 138th Brigade, 46th (North Midland) Division.

On 13 October 1915 the 46th Division suffered 3763 casualties during an attack at the Hohenzollern Redoubt, final phase of the Battle of Loos. The 1/5th Lincolns suffered 483 casualties including 22 from 23 Officers.

On 7 January 1916 the Division moved from Marseilles to Egypt, almost immediately, on 4 February 1916 it embarked at Alexandria and returned to France. On 31 January 1918 the Battalion was transferred to 177th Brigade, 59th (2nd North Midland) Division. Finally on 31 July 1918, the 1/5th was absorbed with the 2/5th Battalion to become the 5th Battalion.

Benjamin was killed in action after the 46th Division stormed the Hindenburg Line, somewhere on the advance to Magny-le-Fosse. On the 29th September 1918 the 46th Division was ordered to cross the St. Quentin canal, capture the Hindenburg line, and advance to positions beyond and consolidate them for defence, after which the 32nd Division would pass through the line, and continue the attack. The following are extracts from an account of the Battle in the Battalion History [see: Sources below]:

” At 3.00 a.m. on September 29th the Battalion left Le Vergier to take up assembly positions on Ascension Ridge. Zero hour was 5.30 a.m., when the 137th Brigade advanced. At 8.45 a.m. Benjamin’s Battalion moved forward to jumping off positions in the Hindenburg system west of the Canal. There was a dense fog, nothing whatever could be seen, and the advance had to be made on a compass bearing, but was successfully accomplished, the exact positions were attained, and the Battalion formed up with three Companies, ‘B’, ‘A’ and ‘D’, from right to left in the front line, with ‘C’ Company in support.

The attack of the 137th Brigade had been a complete success, and at 10.30 a.m. the Battalion moved forward in artillery formation to the bridge across the Canal, resuming this formation and then extending into open formation as we approached the line which by 12 noon had been occupied by the 1/4th Leicestershire Regiment at the west end of Magny La Fosse, in touch with the Americans on our left and the 139th Brigade on our right.

At 12.30 p.m. the Battalion advanced from this line under a creeping barrage which advanced 100 yards in 4 minutes, to Magny La Fosse village, flanking troops simultaneously advancing on our right and left. At this point, where the barrage was picked up, four tanks who were co-operating in the attack, moved forward with the Battalion. “

Another more recent source [see below] takes up the story:

” ‘A’ Company, in the centre, encountered the most opposition during the attack. Two platoons made a direct assault on the village as the other two platoons attempted an outflanking manoeuvre on the southern edge which also included the capture of the potentially dangerous wood. Pockets of stubborn resistance were encountered and casualties began to mount.

The fight for Magny-la-Fosse was over by 2.30 p.m., and ten minutes later, as the 1/5th Lincolns secured their final objectives, the 1/5th Leicestershires resumed the attack and captured Knobkerry Ridge, a further 1,000 yards to the east. But the success was marked by the inevitable casualties. The German artillery, machine-guns and rifles had killed six men and wounded Second Lieutenant Few in the left knee and a further 35 men.

Perhaps not surprisingly, the news was worse among those men from Grimsby who still formed most of ‘A’ Company. They had endured the hardest in the battle. Privates Sidney Jenkinson, Joseph Kelly, Fred Peckham, Sidney Sisson and Frank Sutherland were all dead on the battlefield. Benjamin Smith from Ruskington, near Sleaford, was the only man not from Grimsby among the group to be killed in action. ”

” The freedom with which the enemy surrendered was very noticeable, and the Battalion alone captured 400 prisoners, including several officers, and an artillery group commander, 7 field guns, and 20 machine guns. Our casualties during the advance were 1 Officer wounded, 5 Other Ranks killed, and 35 wounded, but some 20 further casualties were sustained later in the day from the enemy bombardment of the newly captured position. ”

CWGC Records show 11 men, all Privates, including Benjamin, lost their lives in this action, three others are buried with him in Bellicourt Cemetery.

Benjamin’s mother, Jane, died in June 1959, aged 87, and is buried in Grave B. 12, Ruskington Cemetery, Old Plot. Her Grave is right next to the Village War Memorial that bears her son’s name. [Her husband, Francis, had died in January 1916, aged 56, and lies in adjacent Grave B.26.]

This entry was posted in Bellicourt British Cemetery, Lincolnshire, Private and tagged Killed in Action. Bookmark the permalink.