Beresford was born in the December quarter 1920 and was the son of Thomas and Rose Ellen (née Jackson) Headland of Ruskington. They married on 12 July 1902 at St. Barnabus’ Church, Islington, London, when Thomas was working as a ‘Bricklayer‘.

Both of Beresford’s parents died before he reached his 16th birthday. Rose was 50 when she died in September 1931 and Thomas was 56 when he died in March 1936. They were buried together in Grave E 35, Ruskington Cemetery, New Plot.

N.B. The Headland family has been long established in the village of Ruskington. The earliest record is that of William (born in 1791) and his wife, Lattisha (b. 1801) who are buried in All Saints; Churchyard. 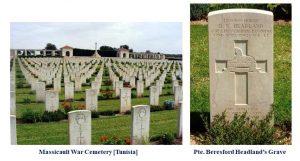 On 3 September 1939 the 6th Battalion, along with the 4th Battalion, were called up at once when the war was declared. In April 1940 it embarked for France and later managed to return from Dunkirk.

In May 1943, the war in North Africa came to an end in Tunisia with the defeat of the Axis powers by a combined Allied force. The campaign began on 8 November 1942, when Commonwealth and American troops made a series of landings in Algeria and Morocco. The Germans responded immediately by sending a force from Sicily to northern Tunisia, which checked the Allied advance east in early December. Meanwhile, in the south, the Axis forces defeated at El Alamein were withdrawing into Tunisia along the coast through Libya, pursued by the Allied Eighth Army.

By mid April 1943, the combined Axis force was hemmed into a small corner of north-eastern Tunisia and the Allies were grouped for their final offensive.

The Battle of Ber Rabal was fought on 22 April. The 128th Brigade (46th Division) were checked near Mehalla and driven back. In a subsidiary action, at Argoub Sellah, 138th Brigade seized the hills and the 26th Armoured Brigade gained a further two miles. It was probably in this action that Beresford lost his life,

Beresford’s 6th Battalion had 18 men killed in action 22 – 24 April 1943. Twelve, including Beresford, are buried in Massicault War Cemetery; the others in Medjez-al-Bab War Cemetery.

N.B. Another Ruskington man of the 6th Battalion, Sergeant 4801307 Robert WILCOX, was killed in action later in the year during the landing as Salerno, Italy.

I am grateful to ‘The War Graves Photographic Project’ for the photos of Beresford’s Grave and Cemetery.

This entry was posted in Lincolnshire, Massicault War Cemetery, Private and tagged Killed in Action. Bookmark the permalink.