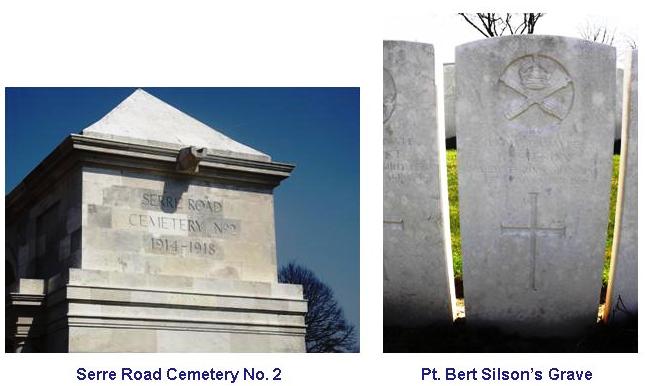 Bert(ie) was born in the December quarter 1897, the son of Jane [née Baker] (Pea Picker) Silson at Rectory Road, Ruskington, Lincolnshire (next door to the ‘Black Bull Inn’). (1901 Census RG 13/3048) This Census shows Jane as a widow, after being married to John Silson who died in the September quarter 1884. He had another brother, Arthur Silson, who served with the 2/4th Battalion, Lincolnshire Regiment.

Also Bert had an older half-brother, John William, and two older half-sisters, Sarah and Eliza, from Jane’s marriage to John.

Bert’s mother, Jane, died on 16 September 1918 at High Street, Ruskington, suffering from “Chronic Rheumatism and Nephritis with Anaemia. ” and is buried in Grave B 149, Ruskington Cemetery, Old Plot.)

On 27 November 1915 ‘The Lincolnshire Chronicle’  reported that Bertie had enlisted in the 2nd Battalion, Lincolnshire Regiment, on 17 April 1915 and trained at Grimsby, and: “… is currently in The Dardanelles. ” His Medal Index Card shows that he enlisted at Lincoln and was posted to: ” Theatre 2b (Balkans – Gallipoli and Aegean Islands) ” on 27 September 1915.

Unfortunately, Bertie’s Service Papers have not survived. The Ruskington Memorial states that he enlisted in the 3rd (Reserve) Battalion, formed in August 1914 in Lincoln. This was a training unit and remained in UK throughout the war. It moved to Grimsby in August 1914 and remained there.

The Battalion’s location in Grimsby and the reference to his training in ‘The Lincolnshire Chronicle’  concur, but he must have been transferred to a different Battalion on his posting to The Dardanelles. This could not have been the 2nd Battalion, as stated in the paper. In August 1914 it was in Bermuda and moved to Halifax, Nova Scotia, before returning to England on 3 October 1914. On arrival the 2nd came under the command of 25th Brigade in 8th Division and on 6 November 1914 landed at le Havre. The 2nd Battalion remained on the Western Front for the duration of the War.

The only Battalion to fit the description is the 6th (Service) Battalion, formed at Lincoln in August 1914 as part of K1 (Kitchener’s First New Army) and came under command of 33rd Brigade in 11th (Northern) Division. After initial training close to home, they moved to Belton Park, Grantham. On the 4th of April 1915 the Division assembled at Witley and Frensham for final training.

The Battalion sailed from Liverpool on the Empress of Britain on 1 July 1915 for Gallipoli from Liverpool via Mudros (8 July), arriving in Alexandria, Egypt on the 12th. The following day the Battalion transhipped to Helles, landing at ‘V’ Beach and taking up a front line position at Eski. After sustaining considerable losses in Gallipoli, the Battalion went to Egypt in January 1916 and returned to France in July 1916.

N.B. For a fuller account of the 6th Battalion’s service in Gallipoli refer to the page in this site honouring Private 15930 William Christopher Cunnington, killed in action on 19 August 1915.

The 99th Machine Gun Company, Machine Gun Corps was raised in Grantham and joined 33rd Brigade, 2nd Division in France on the 28th of April 1916. On 25 November 1915 the 99th Brigade arrived from the 33rd Division to join the 2nd Division. [Two other men killed two days after Bertie were posted to the 99th MGC on 26 July 1916.]

During this last engagement, on 14 November, Bertie lost his life. L/Cpl. 36914 John Abbott and Pt. 27680 Arthur Smith were also killed in action on the same day – though thee is no way of knowing if they died in the same incident. 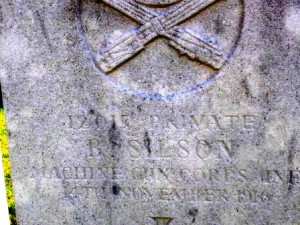 Bertie now lies in  Serre Road Cemetery, No. 2, Plot 1, although he was not originally buried there. Serre Road Cemetery No.2 was begun in May 1917 and by the end of the war it contained approximately 475 graves (including Plots I and II). It was greatly enlarged after the Armistice by the addition of further graves from the surrounding area.

As shown on the right, his inscription is in poor condition and hopefully in the near future he will have his name re-carved.

This entry was posted in Machine Gun Corps, Private, Serre Road Cemetery No.2 and tagged Killed in Action. Bookmark the permalink.