Posted on 17th September 1916 by GrahamC 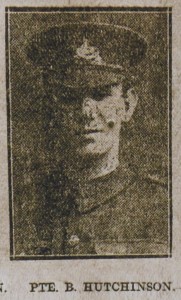 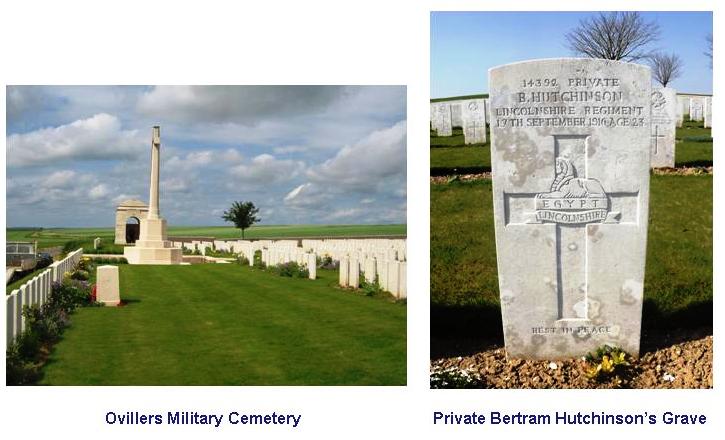 Bertram was born in the June quarter 1893, at Belgrave Terrace, Ruskington, Lincolnshire, the son of Thomas (Building Contractor) and Ellen (née Naylor) Hutchinson. He had four older siblings, Ellen, Thomas, Florence and George J., and in 1901 (Census RG 13/3048) the family was living at Wolesley Villa, Jubilee Street, in Ruskington.

In February 1905 Bertram’s father, Thomas, died, aged 42, and six years later (1911 Census RG 14/19618) Bert was still living at home with his widowed mother at Station Road, Ruskington, and working as a “Printer”. His mother, Ellen, died in October 1914, aged 54. She and Thomas are buried together in Grave 64, Ruskington Cemetery, Old Plot, East Border.

[N.B. Although all of his official documents give his name as ‘Bertram‘ he is named as ‘Herbert‘ on the Ruskington Memorial. It could be that as he was known as “Bert” it was later assumed this was short for Herbert, rather than Bertram.]

According to the SDGW database, Bertram enlisted in the Lincolnshire Regiment at Lincoln, but unfortunately, his Service Papers have been destroyed during a Second World War bombing raid. However, by comparing his Service Number with others of known date it appears he joined up at the end of December 1914  [Pt. 14394 enlisted 2 December 1914] However, ‘The Lincolnshire Chronicle’ [27 November 1915] reported that: “… he enlisted early in the New Year.”

Bertram’s Medal Index Card shows that he was posted to France on 12 May 1915, almost certainly as a reinforcement to the 1st Battalion. The 1st Battalion was stationed in Portsmouth in August 1914, part of 9th Brigade, 3rd Division. It was sent straight to The Front, landing at Le Havre on 14 August 1914. The brigade was attached to 28th Division between 17 February and 2 April 1915. During the actions of 1914 the Battalion had 364 Officers and men killed or died of wounds, plus many more taken prisoner during The Battle of Mons and the subsequent retreat, including the rearguard action of Solesmes on 25 August 1914.

Without Bertram’s Service Papers it is not possible to tell when he transferred from the 1st to the 6th Battalions. Certainly he was in France in November 1915 when the ‘Lincolnshire Chronicle’ published his photo. At that date the 6th Battalion was still in Gallipoli.

The 6th (Service) Battalion was formed at Lincoln in August 1914 as part of K1 (Kitchener’s First New Army) and came under command of 33rd Brigade in 11th (Northern) Division. After initial training close to home, they moved to Belton Park, Grantham. On the 4th of April 1915 the Division assembled at Witley and Frensham for final training.

Read More: In the actions that followed another Ruskington man of the 6th Battalion, Private 15930 William Christopher Cunnington, was killed in action. Read his page on the site to appreciate Bertram’s military record in Gallipoli. [CLICK his name]

On 19/20 December 1915 the Division withdrew from Gallipoli and moved to Imbros and on 26 January the Division began to move to Egypt, landing at Alexandria on 2 February and concentrating at Sidi Bishr six days later. 19 February saw the Division take over a section of the Suez canal defences. This was a quiet time for the Battalion, its only casualty being Pt. Charles Henry Needham who “Died of Sickness” on 31 May 1916.

The Division received orders on 17 June 1916 for a move to France. Embarkation at Alexandria was completed on 3rd July and by the 7th of that month Divisional HQ had been set up at Flesselles. By 27 July 1916, the Division had taken over part of the front in Third Army sector.

Meanwhile Bertram’s 1st Battalion (28th Division) had been in action at:

During this period the 1st Battalion had 108 Officers and men killed or died of wounds in France, although it seems that the Battalion was not in action at Delville Wood.

It could have been when the 6th returned to France Bertram was transferred from the 1st Battalion to be readied for more actions of the Battle of the Somme, in particular the actions at:

The attack on the 15th September gained the high ground on which are situated the villages of Flers, and Courcelette, nearly 3.4 miles [5.5 kms.] apart, from which this battle takes its name. Two innovations were introduced in this battle. For the first time in the war tanks were used, and the rolling, or creeping, barrage was introduced.

However, the 11th Division, in which the 6th Lincolnshires was serving, was not amongst those Divisions which carried out the main attack. On the 2 September Bertram’s Battalion had travelled by train from Frévent to Acheux and marched on to Léavillers and on to Bouzincourt by the 5th. The Battalion took over trenches north of Ovillers a week later on the 12th.

During the night of 15 September ‘C’ Company captured and consolidated Constance Trench. The War Diary says: “… attacked under a heavy bombardment at 5 pm and occupied Constance trench without resistance supported by ‘D’ Company 9th Sherwood Foresters.” On the 17th a bombing attack by the Battalion on Joseph Trench was driven back. An enemy attack on Constance Trench was repulsed in the evening of the same day. War Diary: “… Bombing attack on Joseph Trench driven back 10 a.m. ”

During this action Sgt. 13781 H. Boardman was awarded the D.C.M. His citation reads: “For conspicuous gallantry in action. He held a Bombing Post alone, throwing bombs at the enemy, and was largely instrumental in checking their advance.”

It was some time during these attacks and counterattacks on the 17th that Bertram lost his life. He was one of 33 men of his Battalion to lose his life between entering the trenches on the 12 September and their relief on the 19th. He now lies alongside 6 of his comrades in Graves I.A.9 – I.A.15 in Ovillers Cemetery.

This entry was posted in Lincolnshire, Ovillers Military Cemetery, Private and tagged Killed in Action. Bookmark the permalink.