Frank was born in the March quarter 1893, the son of George (Railway Stationmaster) and Jane Lewin of ‘The Stationmaster’s House’, Station Road, Ruskington, Lincolnshire. He had an older sister, Margaret, and two older brothers, John and Henry (1901 Census RG 13/3048)

In 1911 (Census RG 14/19740) Frank was lodging with the Smith family at 37 Foss Bank, Lincoln, and working as a “Railway Engine Cleaning”. His father had by then retired and his parents and siblings had moved to High Street North, Ruskington. (Census RG 14/19618)

Military Service: Frank enlisted in the 2nd Battalion, Lincolnshire Regiment, at Lincoln in May 1914. ‘The Lincolnshire Chronicle’ [27 November 1915] reported that “.. on completing his training he was drafted to the Regiment in France. He has been wounded in the neck but has recovered and returned to the trenches. ”

His Medal Index Card shows that Frank was posted to France on 6 November 1914. Prior to this the 2nd Battalion had been stationed in Bermuda and moved to Halifax, Nova Scotia when War was declared. It returned to England on 3 October and on arrival came under the command of 25th Brigade in 8th Division. Frank joined his Battalion and landed at le Havre with the rest of the men on 6 November, a much needed reinforcement to the BEF.

The 16th (Service) Battalion (Chatsworth Rifles), Sherwood Foresters Regiment, was formed at Derby on 16 April 1915, by the Duke of Devonshire and the Derbyshire Territorial Force Association. It moved to Buxton on 4 May 1915 and then on to Redmires, near Sheffield, on 8 June. On 2 September 1915 the Battalion moved again to Hursley near Winchester and came under orders of 117th Brigade in 39th Division. Another move, on 30 September 1915, saw them in Aldershot but soon moved on to Witley.

The Battalion was posted to France and landed at Le Havre on 6 March 1916. As Frank was still with the Lincolnshire Regiment in November 1915 (see above) it is possible he joined the Sherwood Foresters in March in preparation for the coming Battle of the Somme.

Without Frank’s Service Papers it is impossible to say, accurately, when he changed Regiments, however, there is evidence that a number or men were attached to Sherwood Foresters Battalions, from Lincolnshires, on or about 13 July 1916, being fully transferred on 1 September 1916.

Frank’s Medal Roll shows he served with 11/Notts and Derby before finally 16/Notts and Derby. (It also shows his previous service with 2/Lincs. then 1/Lincs.) The 16th (Chatsworth Rifles) battalion played a prominent part in the Somme Battles, from August to the bitter end in November 1916. Their losses were heavy.

Their finest hour, and certainly the period of their heaviest casualties, came in the 2nd Battle of Ypres and particularly the grim fighting leading to Passchendaele. It was for outstanding bravery during this battle that Corporal Ernest Albert Egerton (16th Battalion) was awarded the Victoria Cross.

Assuming the above transfer dates to be correct, Frank’s service in France with the 2/Lincolnshire Regiment, he would have seen action in 1915 at The Battle of Neuve Chapelle, 10th March – 22nd April; The Battle of Aubers Ridge, 9th – 10th May, and The action of Bois Grenier (a diversionary attack coinciding with The Battle of Loos, 25th September – 18th October 1915.

In 1916, after his transfer to the Sherwood Foresters, the 16th Battalion saw action at:

N.B. Regina Trench (Staufen Riegel) was a German trench dug along the north-facing slope of a ridge running from north-west of the village of Le Sars, south-westwards to Stuff Redoubt (Staufenfeste), close to the German fortifications at Thiepval. It was the longest such trench on the German front during the War.

In 1917 the Battalion fought in The Battle of Pilckem Ridge, 31st July – 2nd August, and it was here that Frank was killed in action. The War Diary for the time Frank died reads:

2nd. – GIVENCHY. – OPERATIONS. The enemy fired three rounds from a Trench Mortar on the Northern Crater Front at 3am. Our retaliation was effective. A patrol under 2nd Lieut. C.E. Garland went out from the left at 1am. and returned at 3.45am.  CASUALTIES. One man wounded (Shrapnel). “

This ‘wounded‘ man could have been Frank, though if had died of wounds it would be likely he would have been buried. Also the ‘Register of Soldiers’ Effects’ carries the notation: “Death Presumed“. Not surprisingly, therefore, Frank has no known grave and is commemorated on the Menin Gate at Ypres.

However, there is no record of Frank 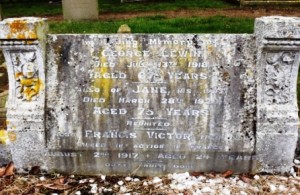 having written a Will, unless an informal one, as one did not go to Probate.

As well as being commemorated at Thiepval, Frank is also commemorated on his parents’ grave in Ruskington Cemetery, Old Plot, Graves A. 283 and 284.