In 1911 (Census RG 14/19617) Fred had moved into the home of his brother-in-law, Robert Elkington, [married to Minnie Rebecca] at the Skin Yard, Dorrington, Lincolnshire, and was employed as a “Labourer Skin Yard”. His parents and younger siblings were still living at Clay Hill, Ruskington.

N.B. Fred’s younger brother, Pt. 2179 Charles H. Start, served with the Brigade Staff of  the 1/1st Battalion, Lincolnshire Yeomanry. He later transferred – Pt. 150146 Machine Gun Corps and served until 2 April 1919. His Service Number is adjacent to his brother Fred’s. His Service would, therefore, have mirrored that described below.

Another brother, Pt. 10768 Samuel William Start, served with the 6th Battn. Lincolnshire Regiment. He was posted to The Balkans on 18 July 1915.

Another Ruskington man, Pt. 15930 William Christopher Cunnington, died in Gallipoli, 24 October 1915. Read his page on this site to appreciate the ferocity of the fighting endured by these two men of the village. [CLICK his name.]

Their youngest brother, Private M/303833 Emanuel Frank Start, was born on 9 January 1899. He enlisted in the Royal Army Service Corps, presumably, in view of his age, late on in the War.

….. about the whole Start family on our sister site “Ruskington Burials” [CLICK button to go to page]

Frederick enlisted in the Lincolnshire Yeomanry (Household Cavalry and Cavalry of the Line) at Lincoln. Unfortunately, his Service papers have been lost, but his Medal Index Card (MIC) shows that Fred was posted to Egypt on 21 November 1915. Fred’s original Service Number, 2180, however, suggests he enlisted around the middle of December 1914. [In the 1917 renumbering of the Territorials, the Lincolnshire Yeomanry issued numbers from the block 55001-60000. Corps of Lancers.]

The regiment was formed on the creation of the Territorial Force in April 1908 and placed under orders of the North Midland Mounted Brigade. Based on Frederick’s home address he would almost certainly been in ‘C’ Squadron, which covered Sleaford, Gainsborough, Market Rasen and Wragby. In August 1914 the Regiment moved with the rest of the Brigade to Norfolk and placed under orders of 1st Mounted Division. 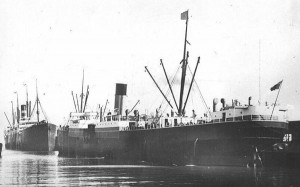 On 27 October 1915 the Brigade embarked at Southampton for Salonika, and Gallipoli, with about 500 troops and 500 horses on board, but on the way their ship, the H.H.T. Mercian, docked at Gibraltar. A few hours after leaving port at 2.15 p.m. on 3 November and without any warning a shell whistled over the ship. A second shell struck amidships and the steam whistle sounded a warning.

They were being attacked by a German U-boat, U.38, commanded by Capt. Max Valentiner. Since torpedoes were so expensive the Germans had surfaced and were using their 21 pound cannon.

The Mercian couldn’t fire back, so the men, with lifebelts on, had to stand on the deck and wait by their lifeboats. The ship sped up and zigzagged through the water. At one point the crew of the ship abandoned ship, but the Yeomanry men took over their jobs and kept going. They did fire back with machine guns but the sub was too far away to hit. At one point the regimental chaplain actually grabbed an unexploded shell and threw it over the side.

The attack lasted for an hour and a half and about thirty shells struck the Mercian. Another ship appeared on the horizon and, perhaps frightened that it was a destroyer, the submarine disappeared. The ship docked in Oran, Algeria. ” There were 78 wounded, 23 men killed, 22 men missing and 8 crewmen missing (later 13 yeomen and 5 crewmen were rescued) “.

Another account, from the Chapter: “The Attack on the Mercian” in Col. Wintringham’s book (see Sources below) reads:

” About 100 men and horses had been killed or wounded. The dead were buried at sea the next morning. We were lucky in having our own MO. Major Purves, aboard as he attended to our many wounded until we reached Oran in North Africa and then supervised their treatment in the French Foreign Legion hospital there.

As soon as the worst holes in the Mercian plating had been patched up and the “walking wounded” were fit to travel (the last of the wounded didn’t leave Oran for Gibraltar until June 1916) we set forth on our journey again and arrived at Malta. Here there were more repairs, and a 12 pounder Naval gun was fixed on the stern-house. Two enormous Marines came aboard as our gun-crew. ”

CWGC Records show that 34 Officers and men of the Battalion died in the attack; 28 were buried at sea and are commemorated on The Helles Memorial, Gallipoli, Panel 331. Five men subsequently died of their wounds and were buried side by side in Le Petit Lac Cemetery, Algiers, after the ship docked. One other, Sgt. Trumpeter 1133 C.F.S. Walker, was returned to Spain and lies in Bilbao British Cemetery. Possibly he was one of the men rescued by the S/S Saint Phillippe. [Another man buried at sea was Farrier Sgt. 1577 Thomas William Atkin, commemorated on the nearby (to Ruskington) Metheringham War Memorial. ]

Strangely, the body of Capt. Sir Thomas Carew Trollope (Baron Kesteven), who died of wounds in Hospital, at Oran, Algiers, on 5 November, 1915, was returned to England for burial in the family’s ancestral vault at Crowcombe (Holy Ghost) Church in Devon.

It seems likely that at this time the Regiment received new orders to sail to Alexandria, Egypt, arriving on 20 November 1915. On 2 December they arrived at the Deir-el-Azab Camp. Much of 1917 was spent moving from one Palestine base to another but the Regiment took part in the Third Battle for Gaza, 31 October – 3 November 1917, in which the British were victorious. CWGC Records show that the Battalion suffered no fatal casualties in this Battle.

They continued to drive the Turks north and by the 9th of December the British took control of Jerusalem. According to the regimental diary they then spend time in Jericho, the Jordan Valley, and Solomon’s Pools. The time in the Jordan Valley would have been particularly trying since the temperature there got as high as 122ºF (50ºC). Later, leave to Jerusalem was granted so it’s possible that Fred got to visit the Holy City.

In April 1916 the Brigade was re-designated as the 22nd Mounted Brigade and attached to the Western Frontier Force. In early 1917 the Yeomanry moved to the ANZAC Mounted Division and participated in the Second Battle of Gaza (17 – 19 April 1917).

Another move was made in June 1917, this time they were attached to the Yeomanry Mounted Division and were involved in the Third Battle of Gaza (27 October – 7 November 1917) and the Battle of Beersheba, later the Division would be re designated and change their name to the 1st Mounted Division and the 4th Cavalry Division, while with the 4th Cavalry Division the Brigade again changed its designation and became the 12th Cavalry Brigade.

In April 1918, the Regiment left the Brigade and the Yeomanry had their horses taken away and the men were ordered to retrain as machine gunners. Heartbroken by losing their trusted steeds they buried their spurs in the desert, merging with 1/1st East Riding of Yorkshire Yeomanry to form “D” Battalion, Machine Gun Corps. It was as the 102nd MGC that they moved to France in June 1918 and were attached to the First Army.

Frederick clearly did not go with the Battalion to France as he died of pneumonia at the 74th Casualty Clearing Station, Palestine, on 13 December 1918. Service number later renumbered to 55537. The CWGC Grave Registration Report for the Cemetery where Frederick is buried states that he was: ” Attd. H.Q. 22nd Mounted Brigade ” at the time of his death.

Frederick is buried in Deir-el-Belah Cemetery, Gaza and it has not as yet been possible to obtain a photograph of his grave. A message on the CWGC website explains why:

” The Commonwealth War Graves Commission is saddened to have to report that Deir El Belah War Cemetery was damaged during a bomb attack in April 2008. The bomb severely damaged the Stone of Remembrance and Cross of Sacrifice but no graves were affected. The Commission appreciates the distress this news may cause to families of those buried at Deir el Belah but we wish to reassure the public that the damage will be assessed and repaired when it is safe to do so and access and materials can be secured. ”