Posted on 6th October 1918 by GrahamC 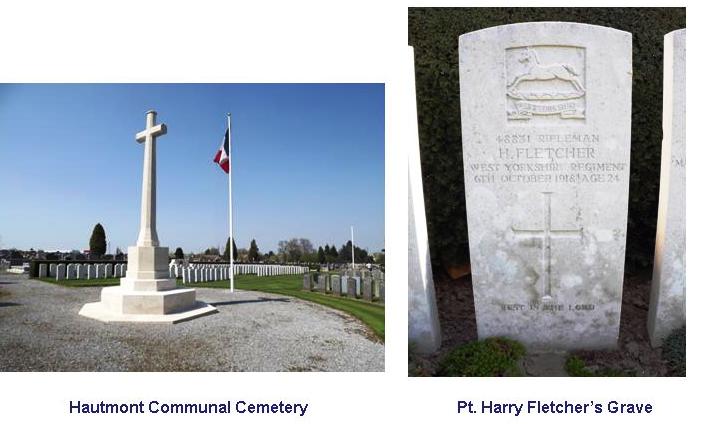 Harry was born on 4 January 1894, the son of Alexander (Labourer) and Mary Helen [Ellen] (Pea Picker) Fletcher. He had a younger brother, Walter, and in 1901 (Census RG 13/3048) the two boys were living with their mother on Pinfold Lane, Ruskington, Lincolnshire. [Private 30446 Walter FLETCHER, 1st Battalion, Grenadier Guards. (Formerly: Trooper 3382, Household Battalion) was killed in action 23 August 1918.]

In 1911 (Census RG 14/19616) Harry was lodging with the Machin family, Farmers, of Hall Farm, Bloxholm, Dorrington, Lincoln, and working as a “Farm Servant”. His parents were still living at Pinfold Lane, Ruskington. (Census RG 14/19618) At the time of his enlistment Harry was resident in Kiveton, Sheffield, Yorkshire.

Harry’s parents lived in the village all their lives. Alexander was 80 when he died in December 1950, and his wife, Mary Helen, 84, when she died in July 1954. They are buried in adjacent Graves 121 and 122, Ruskington Cemetery, New Section, North Border.

In the March quarter 1918 Harry married Ivy Henrietta Cawkwell in Gainsborough, Lincolnshire. The couple had a daughter, Clarice, born in the March quarter 1916. In the December quarter 1919 Ivy re-married Harold V. Hodgson and they lived at Kexby Lane, Gainsborough. Probate Records show that in his Will Harry left £127 19s. 6d. [£127.97 – a relative value of about £6,405 today (2015)] to his mother, Mary Ellen.

According to the SDGW database, Harry enlisted in the West Yorkshire Regiment at Pontefract, Yorkshire, but unfortunately, his Service papers have been destroyed during a Second World War bombing raid. His Medal Index Card also gives no indication when he entered the War, which tends to mean, as he did not qualify for the 1914-15 Star, was after December 1915. He was posted to the 1/7th Battalion.

At the outbreak of War the 1/7th (Leeds Rifles) Battalion – a part of the Territorial Force – was based at Carlton Barracks, Leeds, part of the West Riding Brigade, West Riding Division. On 10 August 1914 it moved to Selby, and at the end of the month to Strenshall and in late October to York. In March 1915 the Battalion moved again to Gainsborough.

Although Harry had not joined his Battalion by then, it was posted to France and landed at Boulogne on 15 May 1915. The formation became 146th Brigade, 49th (West Riding) Division.

The Battalion’s first action was the defence against the first Phosgene attack (19 December 1915), but in 1916 the 49th Division took part in a number of significant engagements during The Battle of Somme:

The following year during The Third Battle of Ypres, (31st July – 10th November 1917) the Division saw further action in the Battle of Poelcappelle, on 9th October 1917.

Although it is not known when Harry joined his Battalion, it is known that he got married early in 1918, so either he was home on leave or was about to be posted to France in preparation for the ensuing Battles of the Lys, 9th – 29th April, especially The Battle of Bailleul, in which the Division defended Neuve Eglise, 57 Officers and men of the Battalion were killed in action between 13 – 16 April, the dates of that Battle.

Whether then or some time later Harry was captured and became a Prisoner of War and on 6 October 1918 he died and was buried in Hautmont Communal Cemetery. Hautmont was captured by the Germans in the early days of the War, and it remained in their hands until retaken by the 42nd (East Lancashire) Division on 8 November 1918. The communal cemetery was used by the German troops for the burial of their dead, and the Allied prisoners who died in the local German hospitals were buried there by the authorities of the town.

Recently [2014] published p.o.w. Records show that Harry died “infolge allgemeiner körperschwäche” [“due to general debility“] and was given an ‘Army funeral’ by his captors.