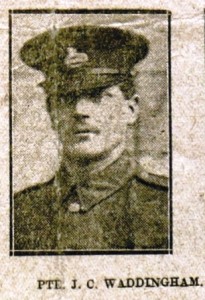 According to ‘The Lincolnshire Chronicle’ [27 November 1915] at the time of his death John was living at Chapel Street, Ruskington. The C.W.G.C. database shows that he was the: ” .. husband of Fanny Waddingham, of 10 Dunkirk, Sleaford. ” This was Fanny Flowers, who he married in the December quarter 1911. They had two sons, George Nathan, born on 23 September 1912, and Samuel Colin, born 31 October 1914.

John was born in the March quarter 1883 at Howell, Lincolnshire, the only son of Nathan (Farm Labourer) and Ann (née Shooter) Waddingham. In 1891 (Census RG 12/2576) he was living with his parents at Holland Fen, Swineshead, nr. Sleaford.

Ten years later (1901 Census RG 13/3041) the family were at the same address, now Sutterton Fen Drove, and John was employed as an “Ordinary Farm Labourer“. By 1911 (Census RG 14/19630) John was lodging at 28 Northgate, Sleaford, the home of the Hutson family, still working as a farm labourer. Later in the year he married Fanny Flowers (see above).

According to the SDGW database, John enlisted in the Lincolnshire Regiment at Sleaford, but unfortunately, his Service Papers have been destroyed during a Second World War bombing raid. However, ‘The Lincolnshire Chronicle’ [27 November 1915] reported that: “… he enlisted in the 3rd Battalion on 23 December 1914.”

The 3rd (Reserve) Battalion was formed in August 1914, in Lincoln, as a training unit. It remained in UK throughout the war, but initially moved to Grimsby in August 1914.

John’s Medal Index Card shows that he was posted to France on 1 April 1915, as a reinforcement, after being transferred to the 1st Battalion. The 1st Battalion was stationed in Portsmouth in August 1914, part of 9th Brigade, 3rd Division. It was sent straight to The Front, landing at Le Havre on 14 August 1914. The brigade was attached to 28th Division between 17 February and 2 April 1915. During the actions of 1914 the Battalion had 364 Officers and men killed or died of wounds, plus many more taken prisoner during The Battle of Mons and the subsequent retreat, including the rearguard action of Solesmes on 25 August 1914.

John was reported missing on 4 June 1915, the date when he was subsequently presumed to have been killed in action. He, of course, has no known grave and is commemorated on the Ypres (Menin Gate) Memorial. John’s Battalion had 27 Officers and men killed in action. Almost all are commemorated with him on the Ypres (Menin Gate) Memorial. 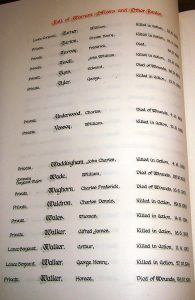 It is unclear why John’s name was not included in the various Ruskington War Memorials, in fact the only place he is commemorated seems to be the Lincolnshire Regiment WW1 Roll of Honour (right), held in Lincoln.

It could be that after their marriage John and Fanny moved to Chapel Street, Ruskington, at the start of their new lives, but after his death, just six months after he enlisted, Fanny moved back to Sleaford, perhaps to live with her sister, Jane and her husband, Henry (Nelsey) and their family, with whom she had been living before her marriage (1911 Census RG 14/19632).

This entry was posted in Lincolnshire, Private, Ypres (Menin Gate) Memorial and tagged Killed in Action. Bookmark the permalink.