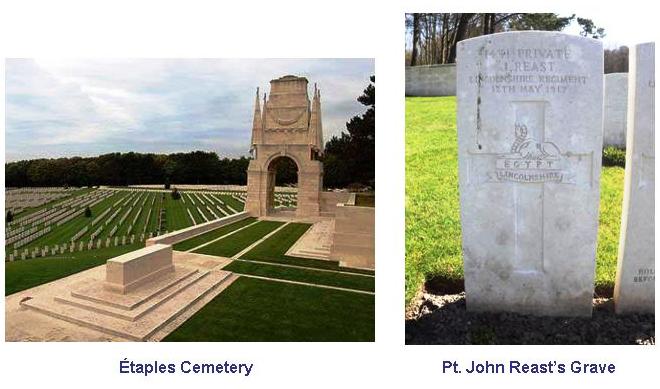 According to his Enlistment Papers, Jack was born in Ruskington, Lincolnshire, about 2 November 1894. He was the son of Harvey (Joiner) and Martha Anders (née Seymour) Reast and in 1901 (Census RG 13/3048) was living at 20 High Street North, Ruskington, with his younger brother, Joseph George (served for a short time as AB F.52069 Joseph George REAST in March 1918 in Naval Air Service), and younger sister, Sarah H.

By 1911 (Census RG 14/19618) three more children had been added to the family, Nora Elma and Mary and the family had moved to 1 West Field Cottages, Rectory Road, Ruskington. Another brother, Robert, was born in the June quarter 1912.

At the time of the Census John was employed as a “Bricklayer’s Labourer”. At the time of his enlistment in 1915 John was 5 ft. 8½ ins. (1.74 m.) tall and gave his occupation as “Butcher“, living at 64 Stanley Street, Gainsborough.

Jack enlisted in the 10th Battalion, Lincolnshire Regiment at Gainsborough on 6 April 1915.  His Medal Index Card shows he did not join the BEF in France until after the end of 1915, as he was not eligible for the 1914-15 Star Medal. His Service Papers do exist but are extremely difficult to read, being in very poor condition. However, a news report following his wounding (see below) stated that he joined his Battalion in December 1915. 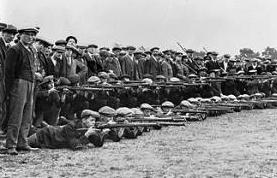 The 10th (Service) Battalion (Grimsby), often known by its original name of the Grimsby Chums, was formed at Grimsby on 9 September 1914 by the Mayor and Town.

In June 1915 the 10th Battalion came under the command of 101st Brigade, 34th Division. They moved to Ripon for musketry training and to join up with other units to form their Brigade.

On 4th January the Chums embarked for France and after landing at Le Havre they deployed in the Armentiers sector. Later in 1916 the Division took part in several engagements during The Battle of the Somme, 1st July – 18th November:

John’s 10th Battalion lost 215 Officers and men killed or died of wounds during this period, 156 on the first day of the Battle. Most of the others were during the Battle of Pozières Ridge.

John was wounded in action on the 2nd April 1917 and after treatment returned to his Unit a week later, in time to join his battalion in the first of these Battles. During the operations of the 9th – 14th April the 10th Lincolnshire lost 2 Officers killed, 5 wounded, and 150 other ranks killed, wounded or missing. About 60 other ranks went to hospital suffering from exposure and exhaustion, for the weather had been vile.

N.B. The remains of 20 British First World War soldiers have been discovered near Arras, Northern France. Archaelogists unearthed the corpses, which were lying arm in arm, at a construction site for a BMW factory. The men, who were killed on the 9th April 1917 were from the 10th Battalion, The Lincolnshire Regiment, known as the “Grimsby Chums“. [See: ” The Lost Patrol “]

The extracts below are from the Battalion History:

” Late on the night of the 24th of April the 10th Battalion, moved to a railway cutting in support of the 16th Royal Scots and 9th Suffolk, who were holding a line facing the Chemical Works.

Between 3.00 a.m. and 4.00 a.m. on the 28th, the attacking troops were ready assembled in their trenches, the Royal Scots on the right, whose objective was Roeux and a line east of it, the Lincolnshire in the centre, with the cemetery and a portion of Clip and Corona Trenches as their objective, and the Suffolk, who were to attack and capture the Chemical Works and railway before passing on to their final line.

The assembly trenches of the Lincolnshire did not face the direction of advance, but at 4.15 a.m., they left their trenches and formed up in the open. The morning was dark, but the enemy probably heard the troops assembling, for he immediately opened fire with trench-mortars, field-guns and machine-guns.

At zero hour (4.25 a.m.) companies advanced, but soon came under intense fire and casualties were heavy. The chateau, a house along the road to the Chemical Works, Clip Trench and the houses round the cemetery were full of Germans, who poured a destructive fire into the attacking troops, enfilading them as they advanced. ”

The Battle continued all day, but many of the 10th Battalion were surrounded and stood little chance. The losses sustained by the battalion were exceptionally heavy. The Commanders of ‘B’, ‘C’ and ‘D’ companies (Captain Frederick Worthington, 2nd Lieutenant James Irvine Taylor and Lieutenant Harold Percival Hendin respectively) had all been killed. In other ranks the killed, wounded and missing were estimated at 420, though many of them were known to have been evacuated wounded. (CWGC Records show 195 Officers and men killed in action on the 28th)

One of those evacuated wounded was John Reast, suffering from gun shot wounds to the left leg and upper left jaw. After initial treatment in the 102nd Field Ambulance, attached to the 34th Division, John was transferred to Étaples, to be treated in the 24th General Hospital. He was then admitted to the 20th General Hospital, Camiers, on 1st May and died there on the 12th. 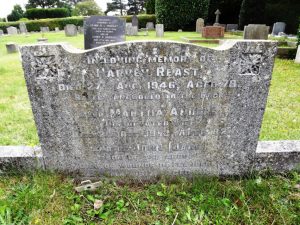 John was buried in Étaples Cemetery, along with thousands of others who died in the many Hospitals around the town.

He is also commemorated on the Grave of his parents, Harvey and Martha Anders Reast, in Ruskington Cemetery, Plot D. (Graves 132 and 133)

On 12 May 1917 ‘The Lincolnshire Chronicle’ carried the following report detailing Jack’s wounds and that he had been admitted to Hospital:

”  SERIOUSLY WOUNDED – During last weekend Mr and Mrs. Harvey Reast, Rectory Road, received information was in a base hospital suffering from a fracture of both jaws. The matron of the hospital says it is a very serious case, but that the boy is under the care of a clever jaw specialist. The latest report is that young Reast had a more comfortable night and was a little easier. From a pal of his it appears the wound was received on April 26th.

Reast joined the Lincolns on April 5th 1915, and went to France in December of the same year. It is only three weeks ago that he was slightly wounded, but was only out of the lines two days. His parents are very anxious about him, but cannot go out to him; they have not seen him since he left England 16 month ago. “

Unfortunately, however, ‘The Lincolnshire Chronicle’ published three days later – on 15 May 1917 – could only confirm that Jack had succumbed to his wounds and died in Hospital at Étaples:

” Parents informed that their son had taken a turn for the worst, his parents left for France, but owing to difficulties in crossing the channel arrived at the hospital the day after he had been buried. It is sad to think that after such a long journey they were unable to see him, but they had some compensation in seeing where he is buried. “

This entry was posted in Etaples Military Cemetery, Lincolnshire, Private and tagged Died of wounds. Bookmark the permalink.