Joseph was born in Ruskington, Lincolnshire, in the June quarter 1897, the son of William (Agricultural Labourer) and Harriet Jane (née Hooton) Clarke. He had an older brother, George Willis.

By 1901 (Census RG 13/3047) the family had moved to ‘The Lodge Cottages’, Ashby de la Launde, Lincolnshire. In 1911 (Census RG 14/19616) the family were at the same address and Joseph was working as a “Labourer on a Farm”. After the War the CWGC recorded Joseph’s parents living at High Street, Leadenham, Lincolnshire.

Joseph does not seem to have lived in Ruskington for any length of time after his birth. For this reason his name does not appear on any of Ruskington’s ‘official’ War Memorials, but was listed in the Memorial Gardens. (see other commemorations below)

When Joseph enlisted Lincoln he was resident at Dorrington, Lincolnshire. His Medal Index Card (MIC) shows that he was not eligible for the 1914-15 Star Medal, which indicates he was not posted abroad until after the end of 1915.

His Service Papers have been lost, but his Service No. in the South Staffs Regiment, 25154, would suggest an enlistment date towards the end of 1915, i.e. November/December. Joseph enlisted initially into the 2nd Battalion, South Staffs Regiment, which was in Aldershot at the outbreak of War, part of the 6th Brigade in 2nd Division. The Battalion was posted straight to France and landed at Le Havre 13 August 1914.

Clearly, if Joseph’s served in France with this Battalion, he must have joined sometime in 1916, possibly in time for the Battle of the Somme. However, he could have transferred to the 4th Battalion, Worcestershire Regiment, before being posted abroad.

Unusually, the 4th Worcesters was an active Battalion, based in Meiktila in Burma in August 1914. It returned to England, landing at Avonmouth 1 February 1915, coming under the orders of 88th Brigade in 29th Division. The Battalion moved to Leamington Spa.

On 21 March 1915 the Battalion sailed from Avonmouth for Gallipoli, going via Egypt. It landed at Cape Helles on 25 April 1915. In January 1916 the Battalion was evacuated from Gallipoli to Egypt, and on 20 March 1916 it landed at Marseilles for service in France.

After these Battles the Battalion were withdrawn to billets at Ville-sous-Corbie. After a fortnight of rest and training at Ville-sous-Corbie the 4th Worcestershire, with the other battalions of the 88th Brigade marched northwards on 15 November, back into the battle area again.

After resting the night of 15/16 November at Sandpits Camp and the following night at La Briqueterie, the 4th Worcestershire moved forward, to the line, passed the 1st Worcestershire at Flers and relieved the 2nd East Lancashire in “Fall,” “Autumn” and “Winter” trenches. From then until the middle of December the 4th Worcestershire remained either in those trenches or in shelters or camps close behind on the devastated battle-field. (4th Battalion were in front line during November 17th to 22nd), and it was during this period that Joseph lost his life.

Joseph is one of seven of the November dead who has no known grave and are commemorated on the Thiepval Memorial. The others are buried in various Cemeteries to the South and South-west of Albert. 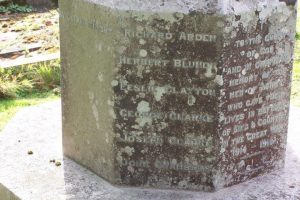 Joseph is also commemorated on the Ashby de-la-Launde War Memorial, in the churchyard of St Hybald’s Church. (right) and the Leadenham War Memorial and Roll of Honour.

This entry was posted in Private, Thiepval Memorial, Worcestershire Regiment and tagged Killed in Action. Bookmark the permalink.