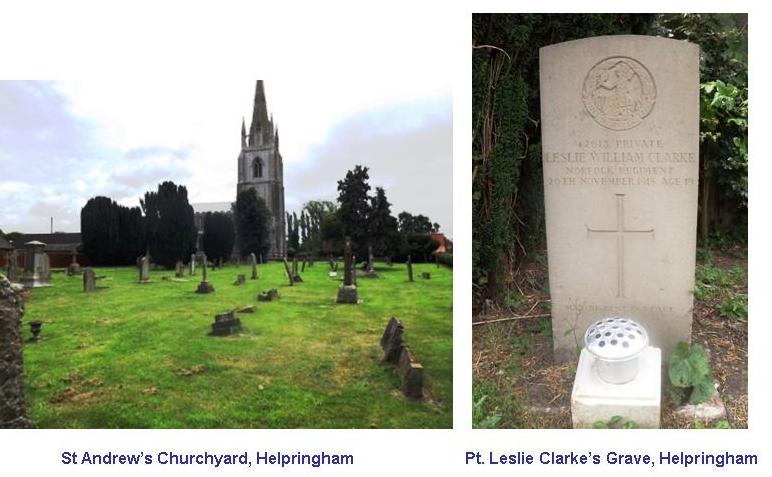 Leslie was born in the September quarter 1899 at Leasingham, near Ruskington, the son of William (Farm Foreman) and Fanny Elizabeth (née Barrand) Clarke. He had two older sisters, Louisa Ellen and Lillian Victoria. A year after Leslie’s birth (1901 Census RG 13/3047) the family were living at ‘Westfield’, Leasingham.

The 1911 Census (RG 14/19646) shows the family had grown by four after the births of Kathleen, Nora, Kenneth and Cecil Burkes. They had moved to Silk Willoughby, Sleaford. [N.B. Cecil died in Ruskington in 1962 and his grave in Ruskington Cemetery (Grave E.29) bears a commemoration to his brother, Leslie (see below). This seems to be Leslie’s only link to the village.]

Later in 1911 another daughter, Edna E., was born and in 1916 Stanley Maurice completed the family. CWGC Records show that after the War Leslie’s parents moved to Hill Farm, Bloxholm, Dorrington.

Leslie enlisted in the Norfolk Regiment in Lincoln, however, the date of his enlistment is not known as his Service Papers have not survived.

The 9th (Service) Battalion, Norfolk Regiment was formed at Norwich in September 1914 as part of K3 (Kitchener’s Third New Army) and came under the orders of 71st Brigade in 24th Division. On 30 August 1915 the Battalion landed at Boulogne, and on 15 October 1915 it was transferred with the 71st Brigade to 6th Division.

The 6th Division were in action during several phases of the Battles of the Somme 1916 and in 1917 were engaged in The Battle of Hill 70 (at same time as the Battles of Arras) and the Cambrai operations. Bearing in mind Leslie’s age at the time it is most unlikely he would have been posted to his Battalion in time to be involved in any of these.

An account from Leslie’s family says: ” 9th Battalion Norfolk Regiment had the Americans on one side and the Sherwood Foresters on the other going from Fresnoy-le-Grand to liberate Brancourt-le-Grand on 8th October 1918 and were repelled near a ‘sunken road’ and pinned down near a railway station where his legs were ‘blown off’. We believe this to be Brancourt station which was destroyed during or soon after WW2. We know the Americans 118th infantry 59th Brigade 30th Division liberated Brancourt later on that very same day. He was taken to hospital in Rouen for a while then brought back to hospital up in Whalley in Lancashire and died there on 20th Nov 1918, age 19. He was buried at Helpringham, Lincs. ”

Leslie wrote a letter to his sister on 7 November where he describes it being: “… rough country out here dear and folks back home would have to see it to believe it …” but the weather was ‘grand‘ and he was looking forward to coming home because they thought it was only a matter of time. He also said to his mother when she visited him in Whalley:  “Don’t worry about me mother, you should have seen some of the poor lads “.

Petre’s book: ‘History of the Norfolk Regiment 1914-1918’ (see Sources below) gives a more formal account of the action where Leslie received his wounds from which he died:-

” On October 1st, at Tetry, the battalion received a draft of 150 men and were able to resume a four-company organization. On the 4th it went by bus to the Magny la Fosse training area till the 6th, when it relieved the 1st Buffs in trenches, ready for another attack on the 8th.

St. Quentin had now been passed, and the Hindenburg Line carried by the Americans and 46th Division. These were now to be relieved by the 6th Division, as they were exhausted. The French on the right had followed the Germans through St. Quentin, but had made little progress beyond, so that the 46th division, and the 30th American Division on its left, formed a considerable salient towards Bohain.

The attack was directed slightly north of east, and the front line of the 71st brigade consisted of the 2nd Sherwood Foresters on the right and the 9th Norfolk on the left, with the 1st Leicester in reserve. No tanks went with the attack, but a battalion of “whippets” was to follow it. On the left of the 9th Norfolk were the 118th American Infantry Regiment. “C” company on the left and “D” on the right were the first line, with “B” in support and “A” in reserve.

At 5.10 a.m. the advance commenced, and the Norfolk battalion pushed on until, at 9.23a.m. they were on a line south of Brancourt station. At 11.56 they were still on this line, in a sunken road leading from Brancourt to Fresnoy le Grand, in touch with the Americans on the left and the Sherwood Foresters on the right. A company of the Leicester battalion had been lent to the 9th Norfolk as reserve. Brancourt was still untaken, and the Norfolk battalion was warned that, if the Americans took it, a counter attack was to be expected, and the defenders must be aided by Lewis-gun and machine-gun fire by the 9th Norfolk.

The advance was scarcely up to the first objective. At 3 p.m., the Americans being reportedly nearly up to the objective, the 9th Norfolk were ordered forward, but found themselves held up by machine guns at Brancourt on their left and Jonnecourt on the right. Their losses had again been so great as to necessitate organization in two companies, for which purpose they were withdrawn to their original line at 6.20 p.m.

The officer casualties on the 8th were: Killed or died of wounds–Captains R. Brunger and W. W. Everett and 2nd Lieutenant R.E. Burford. Wounded–Lieutenant Mutimer and 2nd Lieutenants Hopegood, Middleton and Reed.
The casualties in other ranks are not stated separately for each day, but for the whole of October they were: killed 71, wounded 484, missing 7.

At 8.30 p.m. it was announced that the 71st brigade would probably attack the high ground towards Bohain on the 9th. The 1st Leicester battalion were to relieve the Sherwood Foresters and part of the 9th Norfolk, who were to establish posts connecting up with the Americans at Brancourt Farm. At 2.30 a.m. on the 9th Norfolk Battalion received orders to take part in the attack on the high ground, relieving part of the American right. ”

CWGC Records show that on 8 October 1918 the 9th Battalion had 60 Officers and men killed in action and 24 more in the next 10 days. The Battalion was in action again between 21 – 23 October, losing another 31 men. Without doubt many more would have died of their wounds in the following days, or in Leslie’s case weeks.

As stated above, he died in Queen Mary’s Hospital, Whalley, Lancashire, on 20 November 1918, after seeing the Armistice signed 9 days earlier. Leslie was brought home and buried in one of just two CWGC graves in Helpringham Cemetery, the other being Pt. S/44580 John Norman Skerritt, Seaforth Highlanders, who died of War related illness or injuries on 16 February 1919. 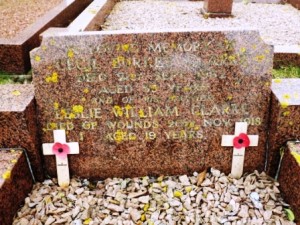 Leslie is commemorated on his brother’s grave at Ruskington

Leslie is also Commemorated on the Grave of his brother, Cecil, in Ruskington Cemetery, New Plot, Grave E.29, although he does not seem to have lived in Ruskington at any time.

For this reason his name does not appear on any of Ruskington’s ‘official’ War Memorials. He is, however, named on the Helpringham Memorial.

This entry was posted in Helpringham Cemetery, Norfolk Regiment, Private and tagged Died of wounds. Bookmark the permalink.