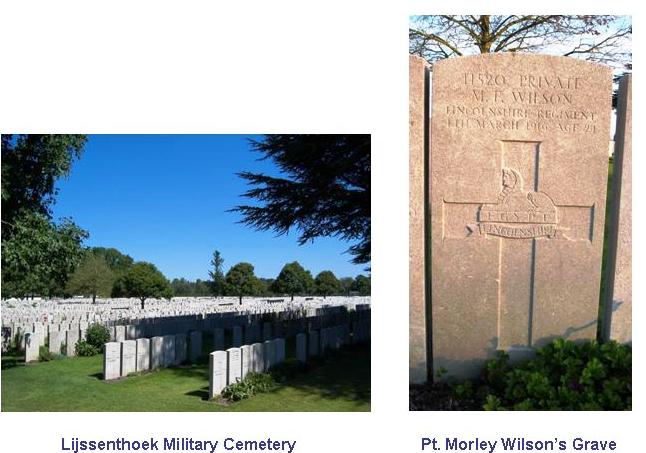 According to his Service Papers Morley was born in Ruskington, Lincolnshire, on c. 24th May 1889, although Birth Records give his birth as in the September quarter 1890, and his name as “Frederick Morley Willson”. His parents were William (Joiner) and Alisamon (née Platt) Willson.

Morley had four brothers who were much older, John William, Tom Charles, Arthur and Harry, and again a much older sister, Elizabeth.

His father, William, died in May 1895 and was buried in Ruskington Cemetery, Old Plot, South Border, Grave 68. In 1901 (Census RG 13/3048) Morley was living with his widowed mother, Alisamon, on High Street North, Ruskington.

On the 26th August 1914 Morley married Louisa Ellen Whiteman at St John’s Church, Mansfield, and they lived at 1 Straws Court, Lincoln, where in September 1915 she was convicting of keeping a brothel and so lost her Army ‘Separation Allowance’.

In 1919 her address was recorded as 112 Cannon Street, Lincoln, where Morley’s mother was also living. CWGC records her address after the War as 1 Woodend, Worksop, Notts.

Morley enlisted Lincoln, on 3 September 1914, for the “Duration of War” and he was posted to the 7th Battalion on 5 September. He qualified as a Lewis Machine Gunner. He trained n a number of locations: Lincoln until 17 September 1914, then to Bovington until the 27th, before moving to Lulworth where he remained until 6 December 1914.

The next day he was posted back to Bovington, where he remained until the 1th April 1915, before a further 9 days at Lulworth. Morley’s final posting was to Hawes Down, Winchester, on 30 May 1915, before, as confirmed by his Medal Index Card, Morley embarked for France on 14 July 1915.

The 7th (Service) Battalion, Lincolnshire Regiment, had been formed at Lincoln in September 1914 as part of K2 (Kitchener’s Second New Army)and came under the command of 51st Brigade in 17th (Northern) Division. As stated above the Battalion landed at Boulogne on 14 July 1915. The Division spent its first period in trench familiarisation and then holding the front lines in the southern area of the Ypres salient.

The Ypres-Comines canal, running south east from the town, cut through the front lines about 3 miles (5 kms.) from the Cloth Hall, Ypres. The 17th (Northern) Division had moved to relieve the 3rd Division in the canal sector between 5 and 8 February 1916, and placed 51st Brigade on a 1300 yard (1189 m.) front at the position known as The Bluff. 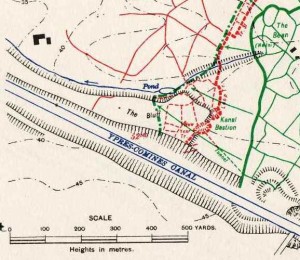 Enemy shellfire began to fall on the Brigade front in the morning of 14 February, intensifying on the Bluff from mid afternoon. Shortly afterwards, German infantry attacked between the canal bank and the Ravine. They entered and captured the front line trenches but were driven out of the support lines behind the front. After four days of fighting the enemy captured the British trenches around the Bluff. Counter attacks failed to dislodge them.   CWGC Records show that Morley’s 7th Battalion had 29 Officers and men killed on the 15th, with several more dying of wounds in the following days. 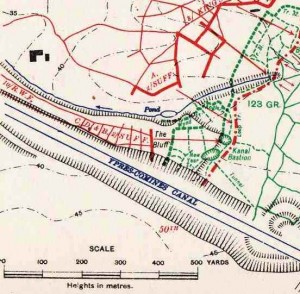 76th and 51st Brigades began an intensive exercise in training to prepare for a frontal assault, planned to take place at dusk on 29 February 1916. All troops were equipped with the new steel helmets.

At 2.15 a.m. on 2 March the leading infantry (right to left, the 2/Suffolk, 8/King’s Own and 1/Gordon Highlanders) began to move and at 4.15 a.m. and the assault was launched fifteen minutes later. The British barrage fire began two minutes after that. The attack achieved complete surprise.

The Official History records that casualties of the 7th Lincolnshire were very heavy: Lt. Cecil Hammersley Waldron and 33 other ranks killed, 5 Officers and 178 other ranks wounded, and 16 other ranks missing, a total of 233 of all ranks. Immediate awards of 4 M.C.’s and 8 D.C.M.’s followed and praise from General Plumer (Lord Plumer) when he inspected the Battalion later in the month near Bailleul.

CWGC Records show that the 7th Battalion had 1 Officer and 58 other ranks killed in action on 2 March 1916, virtually all have no known grave and are commemorated on the Ypres (Menin Gate) Memorial. In the following week 12 more men, including Morley, died of their wounds in C.C.S.s and Hospitals.

Another Ruskington man, commemorated on this site, Pt. 13430 Tom Coupland, also of the 7th Battalion, was killed in action on 2 March in this action.

The CWGC site says of the Cemetery where Morley buried: ” During the First World War, the village of Lijssenthoek was situated on the main communication line between the Allied military bases in the rear and the Ypres battlefields.

Close to the Front, but out of the extreme range of most German field artillery, it became a natural place to establish casualty clearing stations. The cemetery was first used by the French 15th Hopital D’Evacuation and in June 1915, it began to be used by casualty clearing stations of the Commonwealth forces. ” In one of the C.C.S.s Morley succumbed to his wounds and was buried in the Cemetery nearby.

On the 18 March 1916 ‘The Lincolnshire Chronicle’ reported Morley’s death as follows:

” DEATH – The sad news of the death of Pte. Morley Fredk. Willson was conveyed to his relatives by the chaplain of his regiment, during the week. It appears he received gun shot wounds in his arm and elbow, and succumbed to same in hospital “somewhere in France,” on March 4th, the chaplain and the sister who nursed him being present at the burial. He was the youngest son of the late Mr. William Willson and joined the 7th Battalion Lincolnshire Regiment in August 1914, and has been in France several months. He was 26 years of age. “

This entry was posted in Lijssenthoek Military Cemetery, Lincolnshire, Private and tagged Died of wounds. Bookmark the permalink.