Percy was born in the June quarter 1887 in Arnold, Nottinghamshire, the son of Benjamin (Farm Labourer) and Mary (née Hopkinson) Robinson. About 1890 the family moved to 14 Providence Square, Sleaford. (1891 Census RG 13/2578) Percy had an older sister, Florence, and two younger brothers, Walter and William.

Ten years later (1901 Census RG 13/3048) saw the family much enlarged with the births of Joseph, George, Frederick, Mary A., Harold and Alfred, and a move to Knipton Houses, Ruskington (a small hamlet about 2½ miles [4 kms.] west of Ruskington). Another 10 years (1911 Census RG 14/19618) saw a further 4 children born to the family – Albert, Clarice Eveleyn, Arthur Edward and Ethel.

At sometime during the War Benjamin and Mary moved to Chapel Yard, Dorrington, Lincoln, where Benjamin died in the December quarter 1921.

Percy was a serving soldier at the outbreak of the War, having enlisted in the 2nd Battalion, Leicestershire Regiment, in Lincoln, on 8 June 1909, aged 22. From that date to 6 December 1910 Percy trained with his Battalion, before being posted to India, where he gained his 3rd and 2nd Class Certificates of Education.

In August 1914 the 2nd Battalion was in Ranikhet, part of Gharwal Brigade, 7th (Meerut) Division of the Indian Army. Like several other battalions, fears of a rising among the native Indian population meant that it was not at once dispatched to France.

However, mounting casualties among the BEF, and the growing realisation that this was to be a long war, prompted the Indian Government in September 1914 to offer an Indian Corps for service in France. The offer was accepted, and on 20 September the Battalion sailed for France. On 12th October 1914 the Division arrived in France and by the close of the First Battle of Ypres, the Corps was in the trenches.

For the next twelve months, as part of the Meerut Division, the 2nd Battalion endured hardships of cold and enemy fire until it fought at Neuve Chapelle in March 1915 (where Private William Buckingham gained a Victoria Cross, the first for the Regiment since the Crimea). Percy’s Medal Index Card shows that he arrived in France with his Battalion on 12 October 1914, clearly showing he had been with it in India.

Percy’s Service Papers record his death as between 10–13 March 1915, which was the period of The Battle of Neuve Chapelle. The Garhwal Brigade of the Meerut Division, Indian Corps attacked with all four battalions on a 600 yards (550 m) front, from Port Arthur to Pont Logy.

The Garhwal Brigade’s Indian battalions were held up by uncut wire, but the 2nd Battalion led the brilliant attack on the right and smashed a way through or over all obstacles and quickly overwhelmed the enemy holding the trenches covering the village and woods at Neuve Chapelle.

On the right the attack quickly collapsed, both companies losing direction and veering to the right. The attack confronted a part of the German defence not bombarded by the artillery and before the mistake was realised the two support companies followed suit. The Indian troops forced their way through the German wire and took 200 yards (180 m) of the German front trench, despite many casualties.

During the Battle the 2nd Battalion had 92 Officers and men killed in action, only 19 have a known grave, the remainder, with Percy, are Commemorated on the Le Touret Memorial. In total Percy had served 5 years 269 days with the Colours.

— about the 2nd Leicesters at Neuve Chappelle

As Percy’s family lived only a short time on the periphery of the village, and having joined the Army in 1909 he may have been only an infrequent visitor, it is not surprising that Percy’s name does not appear on any of Ruskington’s ‘official’ War Memorials. 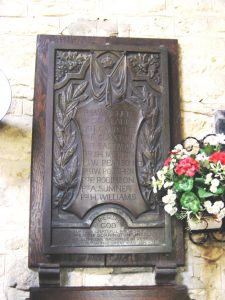 He is, however, commemorated at Dorrington in the Reform Church, Dorrington St James’ Church and Dorrington Ebenezer Wesleyan Chapel.

[The Roll of Honour webpage:  – Dorrington War Memorial has photos of all of that village’s Memorials and Rolls of Honour.]

This entry was posted in Le Touret Memorial, Leicestershire Regiment, Private and tagged Killed in Action. Bookmark the permalink.