Walter was born in the December quarter 1895, the son of Alexander (Labourer / Sawyer in 1917) and Mary Helen [Ellen] (Pea Picker) Fletcher. He had an older brother, Harry, and in 1901 (Census RG 13/3048) the two boys were living with their mother on Pinfold Lane, Ruskington, Lincolnshire. [Walter’s brother, Private 48831 Harry Fletcher, 1/7 Battalion, West Yorkshire Regiment, Died whilst a Prisoner of War, 6 October 1918.]

In 1911 (Census RG 14/20159) Walter was lodging with the Scott family at 19 Stanley Street, Gainsborough and working as a “Labourer in Brickyard”. On 11 October 1917 Walter married Edith Green, a 26 year old ‘Millworker‘, at Christ’s Church Parish Church, Sowerby Bridge, Yorkshire. At the time Walter gave his address as “St Martin’s, Osborne Villas, Windsor“.

Walter’s parents lived in the village all their lives. Alexander was 80 when he died in December 1950, and his wife, Mary Helen, 84, when she died in July 1954. They are buried in adjacent Graves 121 and 122, Ruskington Cemetery, New Section, North Border.

According to the SDGW database, Walter originally enlisted in the Household Battalion (Trooper 3382) at Donnington, Lincolnshire, but unfortunately, his Service Papers have been destroyed during a Second World War bombing raid. However, by comparing his Service Number with others of known date it appears he joined up about 28 July 1917. (He was already a serving soldier when he married on 11 October 1917.)

The unusual Household Battalion was formed as an infantry battalion at Knightsbridge Barracks in London on 1 September 1916. The troops were drawn from the reserve units of the Household Cavalry (the 1st and 2nd Life Guards and the Royal Horse Guards) and underwent much retraining.

His Medal Index Card also gives no indication when Walter entered the War, which tends to confirm, as he did not qualify for the 1914-15 Star, was after December 1915. He was transferred to the Grenadier Guards, 1st Battalion, Private 30446, and again by comparing his Service Number it seems that this transfer took place in February 1918.

On 10 February 1918, the Household Battalion was disbanded as part of a widespread reorganisation of the army in France. The men went initially to the 11th Entrenching Battalion, where they became available for posting to any unit that required a draft. This would tie in with the supposed date that Walter transferred to the 1st Battalion, Grenadier Guards.

The 1st Battalion initially landed at Zeebrugge, Belgium, on 7 October 1914 and on 4 August 1915 transferred to 3rd Guards Brigade, Guards Division, when the Guards were combined into their own Division. In 1915 the Division saw action at various location on the Front. During 1916 the Battalion fought in The Battle of Flers-Courcelette, 15th – 22nd September, and The Battle of Morval, 25th– 28th September.

During 1917 it was in action during the German retreat to the Hindenburg Line, and

After Walter was transferred to the 1st Battalion it fought in The First Battles of the Somme, 1918, 21st March – 5th April 1918 – in particular at:

Walter was in action again at The Battle of Albert, 21st – 23rd August, including the capture of Chuignes, and it was on the third day of this Battle that Walter was killed in action.

The War Diary shows that at 7.30 p.m. on the 20th August the 1st Battalion was located in Boisleux-au-Mont and received the order for an attack the following day. The Diary goes on: 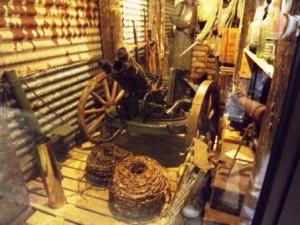 “At 4.55 a.m. Guards Bde attacked a mile to our RIGHT in a thick mist. 5.00 a.m.  Enemy put down a heavy barrage of minenwerfers and shells on our front and support lines. This died away after about a quarter of an hour. Owing to the mist, smoke bombs were not used. Patrols were sent out in front to get in touch with the enemy who, it was thought, might retire.

10.15 a.m.  Lieut HAWKESWORTH and 9 OR entered MARC trench supported by one platoon of No 3 Coy. Two Germans were surprised and captured and the party beat off a strong party of the enemy who attempted to eject them, killing several and afterwards withdrawing to our line without opposition.

The rest of the morning was quiet but during the afternoon there was considerable enemy shelling and trench mortaring. Orders were received for our relief by West Riding Regt. Relief commenced at about 9pm and was complete at about 1:30am. Coys on relief marched independently to shelters about BOIRY ST MARTIN. King’s and No 2 in SUNKEN road, No 3 in SUGAR FACTORY. Bn HQ and No 4 in WINDMILL SWITCH. Casualties during day: 3 OR wounded.

During the morning orders were received to relieve 2nd Guards Bde. These orders were subsequently cancelled. The remainder of the day passed without incident.“

The following day was when Walter lost his life and the War Diary reads: “Owing to the rapid advance of the 2nd Guards Brigade, the 3rd Brigade moved up directly after lunch, the Brigadier arrived at the New H.Q. at 3.00 p.m. The 1st Bn. Grenadier Guards moved straight up into the line and attacked on the right of the 2nd Guards Brigade at 5.00 p.m. The advanced 4,000 yards, occupied MORY SWITCH and took 160 prisoners with very slight casualties. “

[N.B. One of those killed on the 25th was Capt. Pulteney Malcolm, O.C. of King’s Company, 1st Battalion. More details of the action of that day can be seen on the “Findagrave” site.]

Walter has no known grave and is commemorated with others of his comrades on the Vis-en-Artois Memorial. This Memorial bears the names of over 9,000 men who fell in the period from 8 August 1918 to the date of the Armistice.

This entry was posted in Grenadier Guards, Private, Vis-en-Artois Memorial and tagged Killed in Action. Bookmark the permalink.