Posted on 13th September 1943 by GrahamC 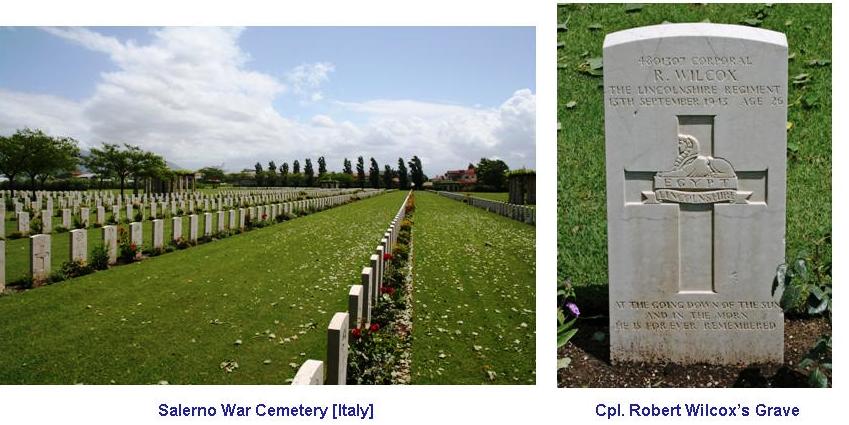 Robert was born in the November quarter 1917, in the Leeds District. He was the son of Robert and Elizabeth (née Poundall) Wilcox (Although Robert Snr. was born in Ruskington, they married 18 December 1915 at St Peter’s Church, Hunslet Moor, Yorkshire.)

In the March quarter 1939 Robert Jnr. married Annie Elsie Baker in Weymouth, Dorset. They had two children, Ivy and Rodney, both born in Weymouth. In September that year Elsie was living with her in-laws (possibly Robert as well – but record is redacted) at the address below.

After Robert’s death, and according to CWGC Records, Annie returned to live at her parents’ home in Westham, Weymouth, Dorset. [She re-married Harry Knight in Weymouth in the March quarter 1956, and died in the June quarter 1984.]

Robert’s parents lived at 6 Council Houses, Rectory Road, Ruskington, for the rest of their lives. They both lived into old age. Robert Snr. was 89 when he died in January 1984. Elizabeth died in March 1991, aged 95. They are buried together in Graves E. 282 and 283, Ruskington Cemetery, New Plot, Section E.

Without Robert’s Service Papers it is not possible to say when he joined the 6th Battalion, Lincolnshire Regiment. However, when War was declared on 3 September 1939 the 6th Battalion was called up at once, the Nominal Roll shows that Robert was embodied into the Battalion on 1 September 1939. In April 1940 Robert would have left with his Battalion for France and later it managed to return from Dunkirk.

In January 1943, the 6th Battalion left by 3 trains from Ascot & Sunningdale in Berkshire for Clydebank. They were to leave the UK and sail for North Africa on the HMT Sobieski. The C.O. was Lt.-Col. J.Y.E. Myrtle. The Battalion ‘Nominal Roll’ shows Sergeant R. Wilcox, as part of ‘A’ company, on board train 3. [CWGC Records show him as a ‘Corporal‘.]

In May 1943, the war in North Africa came to an end in Tunisia with the defeat of the Axis powers by a combined Allied force. The campaign began on 8 November 1942, when Commonwealth and American troops made a series of landings in Algeria and Morocco.

N.B. Another Ruskington man of the 6th Battalion, Private 4809709 Beresford Neville Headland, was killed in action earlier in the year during the North Africa campaign.

Commonwealth and American forces, as part of Mark Clark’s US Fifth Army, landed near Salerno on 8-9 September 1943 and there was fierce fighting for some days as the bridgehead was established. The 6th Lincolnshire’s were in 138th Brigade, commanded by Brigadier G.P. Harding, in 46th Infantry Division which was commanded by Major-General J.L.I. Hawksworth.

At the Salerno landings on 9 September 1943, the 6th Lincolnshires were involved in fierce fighting and completed the expulsion of the Germans from the strong-point of Magazzea.

Later on the Herman Göring Panzer and Reconnaissance, and Grenadier Battalions vigorously engaged the 2nd and the Royal Marine Commandos, which were supported by the destroyer HMS Nubian. Towards evening the 6th Lincs arrived, tipping the scales, and the action died down.

Robert was one of 16 men of his Battalion killed in action between 11 and 13 September. All now lie in Salerno War Cemetery.

This entry was posted in Corporal, Lincolnshire, Salerno War Cemetery﻿ and tagged Killed in Action. Bookmark the permalink.