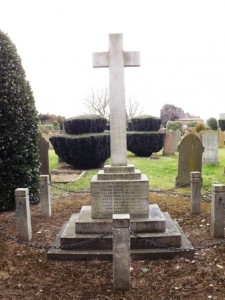 On Sunday, 21 March 1920 a Latin cross about 9 feet (2.75 m.) high of white Portland stone was erected near the entrance of the Cemetery. The Memorial was dedicated by Mr George Colborne Bartlett after being unveiled by Lord Winchilsea.

Mr Bartlett had become Headmaster of the Alvey Schools, Sleaford, on 18 June 1910, after a period as Assistant Master at Lincoln St Faith’s School.

He remained in post at the same School until shortly before his death in 1934. George was also a lay-reader and member of the Parish Church Council.

The couple do not appear to have had any children, and George died on 22 May 1934, aged 61, in the Royal Northern Hospital, Holloway, London, where he had been admitted for an operation. (He was born 4 April 1873 in Steeple Ashton, Wiltshire.)

George was brought home and buried in Sleaford Cemetery where he was joined by his wife after her death on 2 June 1949.

The Memorial is ‘officially‘ described as : “Latin cross about 9 feet high of white Portland stone, which has been, erected near the entrance of the Cemetery. There are three tiered steps at the base and then a square stone block which carries the inscription, then two small tiers at the base of the cross. The area surrounding the memorial is cordoned off with plain wooden posts and chains. ” 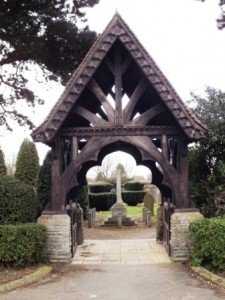 In fact the Memorial is 1.65 m wide by 1.275 m deep by 2.70.m high) It is located at The Cemetery, Sleaford Road, Ruskington, North Kesteven, Lincolnshire, NG34 9BL. (OS Grid Ref.: TF 084 506) It faces the entrance of the cemetery and is approached through the Cemetery lychgate.

The Memorial commemorates only the 30 men of the village who gave their lives in the Great War (i.e. no Second World War additions) and as well as their names and rank. It also (very usefully) lists the Regiment to which each of the casualties belonged.

The front face of the Memorial carries the dedication familiar from all Remembrance Day services, beginning: “They shall grow not old …. ” and the remaining three faces bear the names of the fallen:

In addition to the War Memorial Cross, Ruskington has four other Memorial sites and each has its own page in this site.

As well as housing the Village Memorial, Ruskington Cemetery is also a recognised Commonwealth War Graves Cemetery, although contains just two graves, one from each War:

Morriss Wilson Spinks became a resident of the village after his marriage to Clara Cock in 1909. Aged 28 years, he enlisted in March 1915, but died of pneumonia in Aldershot Military Hospital just 6 weeks later. He was brought home and buried in the Cemetery and is commemorated in this site  –

Ernest John Tilston was born in Lambeth, London, in 1918, but in the December quarter 1940 he married Lucy Ann Blades, aged 19, in the Sleaford District, i.e. probably at All Saints’ Church, Ruskington. Lucy’s maternal family name was ‘Fixter‘ and the 1911 Census shows a the Fixter family farming land at Ruskington Fen. After their marriage it is possible that Ernest and Lucy set up home in the village, from which he was buried.

After Ernest’s death Lucy moved to live in Spalding and it seems likely that his name was omitted from the World War 2 Memorial as there was no-one remaining in the village to put it forward for inclusion. However, Ernest is now commemorated on this site.

In addition, some of the family graves in the Cemetery contain dedication inscriptions to a member of the family who gave his life in the Great War.