The first Wesleyan Methodist chapel in Ruskington was built in 1833. It was replaced by a new chapel on Chapel Street in 1849, which was rebuilt in 1958. [See: “Ruskington Methodist Church“.] 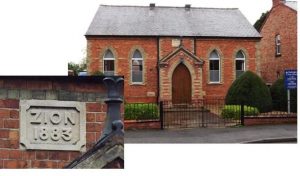 Another Wesleyan Methodist chapel called the “Zion Chapel” is located on Chestnut Street, Ruskington. It has a gabled porch and ashlar tablet above which reads: “Zion 1883“. (pictured right)

In 1883 the Church cost £200, however, the Wesleyan Reform Fellowship in the Village date back to the 1850s. At one time in its history the Chapel on Chestnut Street had trouble accommodating all of its worshippers and “… rent availability of seats was at a premium.“ 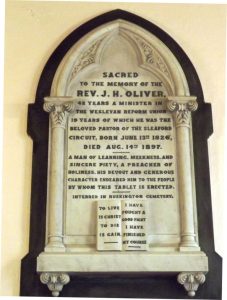 For much of its history the Church has had a full time Minister who has had oversight of the fellowship. The Manse, neighbouring the Church was built in 1923. A plaque commemorating the Rev. J.H. Oliver is mounted at the front of the Church. [N.B. John Henry Oliver is buried in Plot A, Grave 180, Ruskington Cemetery.]

The Church was renamed Ruskington Free Church in 1998, but remains true to is evangelical traditions and also remains in fellowship with the Wesleyan Reform Union. 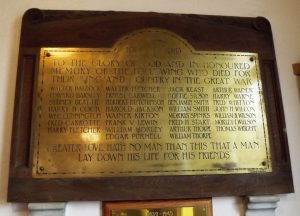 The unveiling and dedication service of the World War 1 Memorial took place on Sunday 15th January 1922.   The tablet, which is of brass and similar to the one in the Parish Church, listing all the Village’s War dead, is mounted on oak, the wood being given by Mr. G. Philling, and worked and fitted by Mr H. Read. The unveiling and dedication was by Ald. R. Pattinson, J.P.

After the end of World War 2 a smaller, though similar tablet – also bearing the name of all of the Village’s War dead – was mounted on the wall below the WW 1 Memorial. [Click either image for a more detailed copy.] 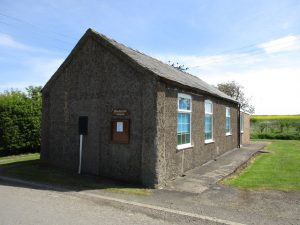 There is another Methodist Church in the Ruskington area, located on Fen Road, North-east of the village.

It is a simple rectangular building, which was opened in 1858, but it does not contain a War Memorial for either World War.

In addition to the Zion Wesleyan Methodist Church War Memorial, Ruskington has four other Memorial sites and each has its own page in this site.