Those Who Also Served (Surnames W to Z):

The following are short biographies of the men of Ruskington who enlisted during the Great War with surnames beginning ‘W’ to ‘Z’:

Remembered on this page are:

SCROLL DOWN – to read more about these Ruskington men.

A/Cpl. S/9324 Tom Prince WAINER – was born on 26 September 1880, the son of Tom (Bricklayer) and Ellen (Helen) [née Prince] Wainer. He had nine brothers and sisters, Annie Mary, Florence Helen, Elizabeth, John Richard, William, George Frederick, Rebecca Louisa, Nellie and Arthur. (Annie Mary and Elizabeth both died in infancy and are buried together in the Parish Churchyard, near the SW Wall.)

By 1911 (Census RG 14/19618) they had moved to High Street North, Ruskington, although Nellie and Arthur were the only children still living with their parents. Tom’s parents are buried in the East Border of Ruskington Cemetery, Old Plot, Graves 56 and 58. [Helen died in December 1914, aged 61, and Tom in December 1925, aged 75.]

Tom was posted to France on 27 November 1915. On 14 October 1916 Tom was badly wounded by gun shot wounds to his left foot and right side of forehead, and 5 days later returned to Duston War Hospital, Northampton where he spent the next 5 months.

On 8 May 1917 Tom was transferred to the Army Pay Corps and a year later promoted to Acting Corporal.  During this time his home/family address was “14 Newcombe Road, Wellingborough“. Although he was discharged in 1919, he re-enlisted into the Army Education Corps, attached to the Middlesex Regiment.

Tom died on 16 May 1922 at Mill Hill Barracks, Middlesex, the Regimental Depot for the Middlesex Regiment (Duke of Cambridge’s Own) – maybe from repercussions from his wounds. Nellie, his wife, received a War Pension.

N.B. Tom’s older brother, Pt. 32651 Arthur WAINER, served with the 8th Battalion, York and Lancaster Regiment. He was killed in action on 2 October 1917. He has no known graves and is commemorated on the Tyne Cot Memorial. 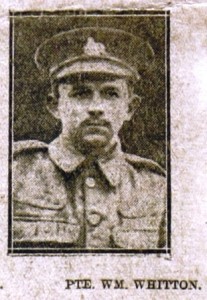 Private 10007 William WHITTON – was born on 19 April 1892, in Ruskington, Lincolnshire, the son of John Charles (Horseman on Farm) and Ruth (née Ward) Whitton. The 1901 Census (RG 13/3048) shows that William had two younger brothers, Fred and Arthur, and a younger sister, Sarah Elizabeth. The family was living at ‘Westcliff’, Ruskington.

Before the end of the War, however, William’s mother, Ruth, died, in April 1917. She was buried in Ruskington Cemetery, Old Plot, Section A, Grave 273. Father, John Charles, lived another 40 years and was 90 when he died on 16 June 1967. He was buried in Sleaford Cemetery.

William attested in the Lincolnshire Regiment, at Sleaford, on 14 November 1914 and was posted to  3rd (Reserve) Battalion. [He gave his date of birth as 20 April 1894 – see above] He was trained at Grimsby and his Medal Index Card shows that he was posted to France, to the 1st Battalion, on 24 April 1915.

After being wounded on 16 June 1915 with a “Gunshot Wound – Right Leg“, William was sent to Belfast to recuperate and as at 27 November 1915 and ‘The Lincolnshire Chronicle’ he was recuperating in Kingsholme. William’s wounds occurred during what became known as “The Great Charge of the Lincolns” at the Battle of Bellewaarde. The 1st Lincolns lost 100 Officers and men killed in action on that day, almost all of which have no known grave and are commemorated on the Ypres (Menin Gate) Memorial.

…. about The Battle of Bellewaarde

After the War William married Annie Elizabeth Bembridge in the Sleaford District (probably All Saints’ Church, Ruskington) in the June quarter 1924. The 1939 mini- Census shows the family living at Kelby, Lincolnshire [Kelby lies 5 miles (8 kms.) south-west from Sleaford.]. William was employed as a ‘Farm Carter’.

He died in the December quarter 1983 in the Grantham, Lincolnshire, District, aged 90. Annie was 88 when she died just a few months earlier. 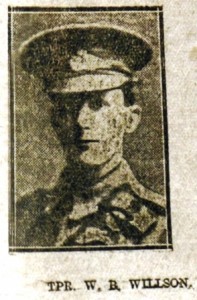 In 1901 (Census RG 13/3048) he was living with his parents and younger siblings, Annie M. and Frederick Leslie, at Silver Street, Ruskington.

John and Matilda Willson remained in the village until their deaths and are buried together in Ruskington Cemetery, New Plot, Graves E. 16 and 17. Both were 85 years old when they died, Matilda in November 1952 and John in December 1953.

William enlisted in the Royal Gloucestershire Hussars in July 1915. He was later posted to the Corps of Hussars and re-numbered – 235687. William did not qualify for the 1915 Star Medal, indicating he was not posted abroad until 1916. By then the Hussars, which had been in Egypt and Gallipoli between April and December 1915, were back in Egypt.

Without his Service Papers, which have been lost, it is impossible to say when William joined his Regiment, but it is quite likely he served in Egypt.

…. about The Royal Gloucestershire Hussars

William was discharged on 19 April 1919, under King’s Regulation 392 (xvi) – ‘Surplus to military requirements (having suffered impairment since entry into the service)‘.

After the War, in the March quarter 1921, William married Beatrice Russell, probably in Ruskington and they had a son, Stanley, in 1923. The 1939 mini- Census shows the family living at 6-8 Northgate. Sleaford, where they ran a ‘Stationer and Newsagent’ shop.

Ernest attested at Sleaford, on 11 December 1915, aged 18 years 7 months and was immediately posted to the Army Reserve. Ernest was mobilized for active service on 11 May 1917, aged to 19 years 226 days and posted to the A.S.C. (MT). [The Army Service Corps Mechanical Transport Companies filled a variety of administrative, recruitment, induction, training and re-supply roles.]

Originally Ernest was posted to No 1 Reserve Mechanical Transport Depot at Grove Park, London. [With the outbreak of the Great War the 400 residents of the workhouse, which had been opened by the Greenwich Board of Guardians in 1903, were expelled to other institutions, and the building was taken over by the Army Service Corps as a mobilisation and training centre.]

On 11 June 1917 Ernest passed his “Learner’s Test”, although his Service Papers do not specify in what. Ernest embarked from Southampton to Le Havre on 16 July 1917, on board the “Lydia”, arriving the next day and joined the 938 M.T. Company. 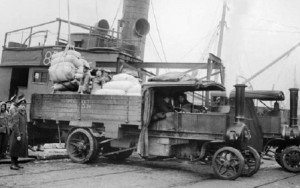 In March 1918 Ernest spent some time in 25th General Hospital at Hardelot, near Boulogne. On 24 February 1919 he suffered a severe sprain to his right ankle following an accident which occurred whilst he was:    “… trying to lift a Sentinel front wheel on to a lorry.   He slipped due to the ground being frozen and as he fell the wheel seemed to strike his right foot which soon caused a swelling.“

[A ‘Sentinel’ was an all purpose steam wagon built by the Foden Co.] At that time Ernest was serving with the 71st Auxiliary Steam Company.] Ernest was transferred to ‘Class Z, Army Reserve’ on demobilisation on 22 October 1919.

Ernest’s link to Ruskington was brief, from the time he moved here to work until his enlistment. On 29 April 1922 he married Emeline Bushell, back in Hunslet and they had three children. The family moved to Norwich, where Emeline died in the June quarter 1945. Ernest also died in Norwich in the March quarter 1974, aged 76. 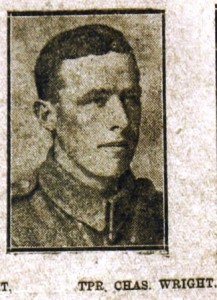 Charles had enlisted in the Lincolnshire Yeomanry on 9 January 1911, aged 17 years 6 months, for a period of four years. The Territorial Force Battalion underwent its annual training at Belton Park (1911), Louth (1912), Grimsthorpe (1913) and Riseholme (1914). In view of where he lived Charles was probably in ‘C’ Squadron, which covered Sleaford, Gainsborough, Market Rasen and Wragby.

Charles re-engaged at Grantham on 15 September 1915 and was re-numbered 165945. ‘The Lincolnshire Chronicle’ [27 November 1915] reported Charles was in training with the 1st Battalion, Lincolnshire Yeomanry, when War was declared and had mainly been stationed at Oakley Park.

The Yeomanry was placed under orders of 1st Mounted Division and on 27 October 1915 the Brigade embarked at Southampton for Salonika. En route, the destination was altered and by the end of November the Regiment had arrived at Cairo. It remained in Egypt/Palestine theatre until May 1918.

Charles was posted to his Battalion on 28 February 1915 and sailed with it to Salonika. He remained at the Front for 2 years 269 days. On 29 February 1916 Charles was promoted to Lance Corporal and reported to duty on 26 August.

After a period in England, on 16 June 1918 Charles was “Compulsory transferred to the Machine Gun Corps” and posted to 102 Battery. He was formally demobilised at Boulogne on 14 February 1919, returning home the next day. After demobilisation Charles returned to the village and there is no record of him marrying.

The 1939 mini- Census shows that at that time Charles was lodging with the Danbury family at Pode Hole, and working as a ‘General Labourer Heavy Worker‘. [Pode Hole is a small village 2 miles [c. 3 kms.] to the west of Spalding, Lincolnshire.] 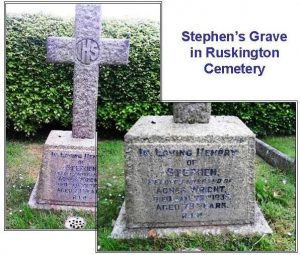 His parents also remained in the village for the rest of their lives. Stephen Thomas died in May 1935, aged 79, and Agnes in November 1944, aged 80.

They are buried together in Graves 69 and 70, Ruskington Cemetery, Old Plot, East Border. [Obviously they had reserved the adjacent Plot, where Charles was eventually laid to rest. His sister, May Elizabeth, who died in 1915, aged 18, is in Grave 71.] 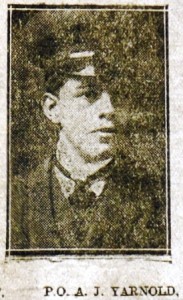 Arthur also had an older brother, Thomas Frederick, from his father’s first marriage to Sarah (née Couling), who died in 1890

Arthur’s date of engagement in the Royal Naval Air Service was 6 November 1914 “For the duration of the War“. (He gave his date of birth incorrectly as 5 December 1895, adding a year to his age).

His 1st posting was to ‘Pembroke III’ from 6 November 1914 to 31 March 1915 which was administrative. Later RAF record shows 6 November 1914 promotions description as  “P.O.M. E (Armoured Cars)“. [HMS Pembroke was a shore based training establishment, a RN Barracks at Chatham. Building was started in 1897 and completed towards the end of 1902.]

On 1st April 1915 Arthur was posted to another shore-based station, known as ‘President II’, an accounting base in London, as sailors have to be assigned somewhere when between ships. At this point Arthur’s Service Record is indecipherable (at the moment), but it seems he was posted to Eastbourne on 1 September 1915. This was the date he officially reverted to Air Mechanic 1st class from Petty Officer Mechanic and when he left the Armoured Car Force.

Also from this date Arthur is listed as ‘Air Mechanic’ having qualified on 1 September, and the reverse of his subsequent RAF Service Record shows service in France from 10 November 1915 to 10 October 1916. On returning from France on 11 October 1916 Arthur was again posted to Crystal Palace, which was an Air Mechanic Training Centre, where he remained until 26 October 1916.

On 1 August 1916 Arthur returned to the shore base HMS Pembroke II at Eastchurch, Kent, and from 1 July to 9 November 1917 he was stationed at Royal Naval Air Station, Lee-on-Solent, (HMS Daedalus) which was one of the primary shore airfields of the Fleet Air Arm, first established as a seaplane base in 1917.

More training took place on return, after three days back at Crystal Palace (22 – 25 March 1918) and a week at ‘Wormwood Scrubs‘, which was another RNAS base at the time, Arthur’s Service was transferred to the Royal Air Force on 1 April 1918, which was the date when the RAF formed from the amalgamation of the RFC and RNAS.

On transfer to the RAF Arthur is recorded as being of ‘good character’ and ‘moderate‘ proficiency and he has a trade classification of ‘Fitter A E‘. He remained at Wormwood Scrubs until 4 May 1918, which become an RAF Base, and from sailed for  three and a half months service in GEA (presumably German East Africa – Zanzibar, gained from Germany in exchange for Heligoland), arriving on 22 May, serving there until 11 September 1918.

The main base on Zanzibar was in a bay, accessible by boat. It was a seaplane base and Arthur had been in the Royal Naval Air Service. He was a mechanic and even if he was a vehicle mechanic, such skills were transferable for aircraft maintenance, so it was probable that he worked on aircraft, vehicles or even on motor boats.