Reuben Fallier Woods Marriott was born 23 July 1912 at Knipton Houses, Lincolnshire,  the home of his widowed grandmother, Martha (née Woods) Marriott. He was the son of Henry (Scaffolder) (see below) and Jane (née Marriott) Marriott. He had two older brothers, George and Bertie (see below), and a younger brother, Arthur. 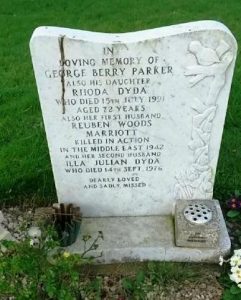 In the March quarter 1938 Reuben married Rhoda Parker, probably in the Village, at All Saint’s Church.

They initially lived at the home of Rhoda’s parents at 60 Newfield Road, Ruskington. They had one son, Michael, born 26 January 1940. Rhoda later re-married, Illa Julian Dyda.

When she died on 15 July 1991 at 8 Greenfield Road, Sleaford, Rhoda’s cremated remains were buried, on 19 August, with her father, George Berry Parker, in Sleaford Cemetery, Plot Number WBNP079. Reuben was commemorated on their Grave.

After being evacuated at Dunkirk it was re-equipped and sailed to the Middle East and joined 4th Armoured Brigade in November 1940, taking part in the British offensive in late 1940 which re-captured Sidi Barrani from the Italians in late 1940.

Along with the rest of 7th Armoured Division, the famous “Desert Rats“, it was re-equipping in the Nile Delta when Rommel attached in April 1941 and in November 1941 it was part of 7th Armoured Brigade ready for the ‘Operation Crusader’ battles.

On the day Reuben was killed, 24 November 1941, the History describes the action of that day: 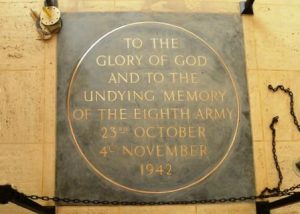 On the same day 64 other British soldiers were killed in action. 34, including Reuben, have no known grave and are Commemorated with him on the Alamein Memorial.