Posted on 3rd January 1945 by GrahamC 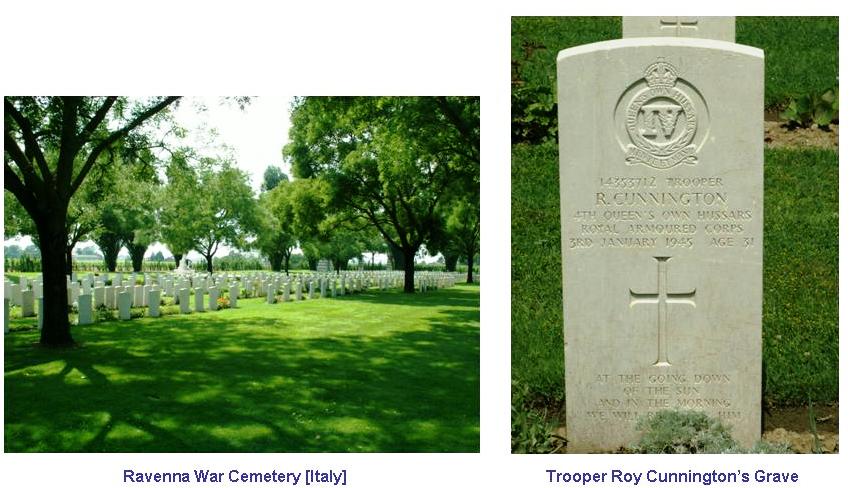 In the June quarter 1938 Roy married Annie Cook, of Ewerby, Lincolnshire. There is no record of them having children. Before enlisting Roy worked as a “Carpenter and Joiner” and the couple lived on Westgate, Ruskington.

The Cremation remains of Annie were interred in Grave D 217, Ruskington Cemetery, New Section, alongside her parents, Andrew and Emma Cook, following her death in January 1976, aged 61.

In the Second World War the 4th and 8th Queens Own Hussars served together  in the Battle of Alam el Halfa in the Western Desert which took place took place between 30 August and 5 September 1942.

In 1941, it took part in the defence of Greece, during which it was involved in a series of rearguard actions covering the withdrawal from the Yugoslav border to the Southern Beaches.

After a serious of engagements ‘A’ and ‘B’ Squadrons were also converted to use Priest SPGs modified to carry troops known as “Kangaroos or Defrocked Priests“. It seems likely that Roy was in “A” Squadron.

At 9.00 a.m. ‘A’ Squadron moved to Mezzano to take up position in support 1st King`s Royal Rifle Corps (KRRC.). The intention was for 1st KRRC, with ‘A’ Squadron in support, to secure a start line for 11th Canadian Infantry Brigade to advance to the North, and to cover the left flank after they have passed through. By 5.00 a.m. the following morning (2nd) this had been achieved.

“0600 – 4Troop [Trp] ‘A’ Squadron, when moving into position before first light, found C Company [Coy] 1st KRRC position completely surrounded by strong enemy fighting patrol. The leading Tank opened fire at 50 yards range and drove off the enemy, leaving 13 PoW and 25 killed and wounded. Own casualties nil.
0800 – The enemy launched a large scale attack against the 1st KRRC positions, the main thrust being directed against C DI MEZZO where ‘A’ Squadron 12th Lancers in a dismounted role and under command 1st KRRC had relieved C Coy 1st KRRC. The attack was also directed against the house at 475470 held by A Coy 1st KRRC. 4Tp, this time in support of A Sqn 12th Lancers, again moved up to engage the enemy. Unfortunately owing to the darkness, the leading Tank was put out of action by a bazooka, but the other two Tanks continued to fire at the enemy at close range until their ammunition was exhausted, whereupon the Tp Ldr leapt out of his Tank, picked up a German automatic rifle and engaged the enemy with it from his turret. In the meantime, a Stuart Tank from SHQ had been sent up with ammunition for the Infantry and Tanks, and after delivering this ammunition, joined in the battle with its .5 Browning and Bren gun.

Later 3Tp ‘A’ Squadron moved up to support 4Tp and was soon engaged in the battle. This was highly successful and 3Tp killed or wounded about 40 enemy in a ditch just ahead of their position. During the course of this battle, the enemy had managed to infiltrate North of A Coy 1st KRRC and had reached area 486403 before C Coy in reserve, with 1Tp in support, and with the help of Canadian Infantry on the right, counter attacked and drove the enemy back. The Tanks in this action had a very successful shoot and the Infantry and Tanks between them killed or captured nearly all those who had infiltrated, 150 PoW and 100 estimated killed or wounded. Own casualties 3 ORs killed and 2 wounded, 1 later died of wounds. ”

Roy was one of those killed in action, with two of his comrades, on 3 January 1945; two more died the following day. All five now lie in Ravenna War Cemetery, a site selected by the Army in 1945 for burials from the surrounding battlefields.

…… from the War Diaries of the 4th Queens Own Hussars

After attending the Royal Military Academy Sandhurst, where he graduated eighth out of a class of 150 in December 1894, Sir Winston Churchill  was commissioned as a 2nd Lieutenant in the 4th Hussars on 20 February 1895.

This entry was posted in 4th Queens Own Hussars, Ravenna War Cemetery, Trooper and tagged Killed in Action. Bookmark the permalink.