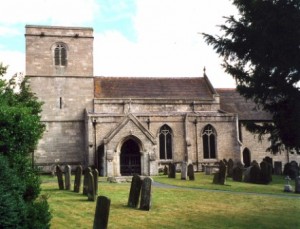 According to a mounted scroll inside the Church:

“Records show that a small Saxon Church, probably constructed of timber, was built in 1086. at the end of the 12th Century a more substantial Norman structure was replaced by yet another on the present site.

The small lancet windows low down on the North and South Walls of the Chancel still remain.

Features of the 12th Century building are the South doorway and an exceptionally fine pillar in the Arcade of the Nave. The broad circular base and dog tooth ornamentation can be seen from the Children’s Chapel.

During the 13th Century the North Arcade was rebuilt with plainer pillars. Nevertheless, the bases, which were probably the only seats at the time, were left and remain to the present day.

In the South Aisle the East Window was built during the 14th Century and the other two a hundred years later. The exterior window sills appear to be mediaeval tomb slabs. 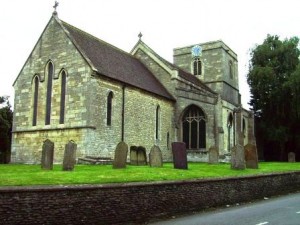 After the Spire collapsed the Tower was rebuilt in 1620. Some of the stone was probably used in constructing the Porch on the East side of which a gargoyle still looks surprised at finding itself in such a strange position. The Children’s Chapel was built in 1949.”

[The Children’s Chapel is dedicated to the memory of the men of the village who gave their lives in World War 2.] 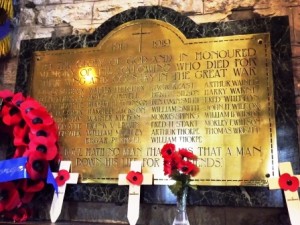 in the Church is in the form of a Brass Plaque mounted on a marble back plate.

It is located on the North wall and flanked by the Royal British Legion Standard and the Union Flag.

The Plaque bears the names of all 30 Ruskington men who died in the Great War, and commemorated on this site.

Above the names is the inscription:      “TO THE GLORY OF GOD AND IN HONOURED MEMORY OF THE FOLLOWING WHO DIED FOR KING AND COUNTRY IN THE GREAT WAR”

Below the names the Memorial reads: “GREATER LOVE HATH NO MAN THAN IS THAT A LAYS DOWN HIS LIFE FOR HIS FRIENDS” 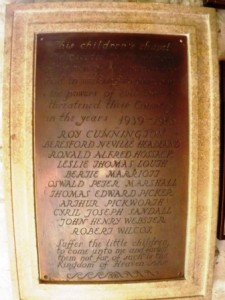 is on the opposite wall, in the ‘Children’s Chapel’, in the form of a framed wooden plaque, incised with the names of the 11 village men who gave their lives.

It was made by Messrs F. Hossack and Son of Ruskington.

The dedication at the top of the Memorial reads:

The inscription below the names read:

“Suffer the little children to come unto me and forbid them not for of such is the Kingdom of Heaven.”

Details of these men of the village can be accessed through the “World War 2 – Casualties” page on this site. 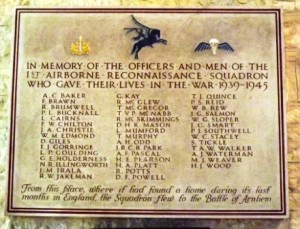 When the Squadron returned from Italy in New Year 1944 it was moved and billeted in the village and retrained from a Glider squadron to a Parachute one.

After training the 45 members of the Squadron joined ‘Operation Market Garden’ – the attack on the Rhine Bridges at Arnhem, from which 30 men returned to the village on 28 September 1944. The villagers were said to be devastated by the loss of so many men. After VE Day, the Squadron saw service in Norway, at Stavanger and Oslo, where it oversaw the withdrawal of German troops. 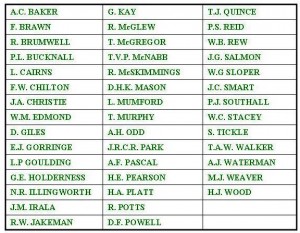 The Memorial lists the names of 43 men of the Squadron who gave their lives in the Second World War.

“From this place, where it had found a home during its last months in England, the Squadron flew to the Battle of Arnhem.“

In addition to the War Memorials in the Parish Church, Ruskington has four other Memorial sites and each has its own page in this site.