N.B. Baghdad (North Gate) War Cemetery is located in a very sensitive area in the Waziriah Area of the Al-Russafa district of Baghdad. A two volume Roll of Honour listing all casualties buried and commemorated in Iraq has been produced. These volumes are on display at the Commission’s Head Office in Maidenhead and are available for the public to view.

According to his Service Record William was born on the 2 June 1895, however, Birth Records show his birth in the June quarter 1896. Like many he may have added a year to his age to enlist early. He was the son of John William (Grocer and Baker) and Louisa (née Couling) Wilson and had an older sister, Ethel Mary. 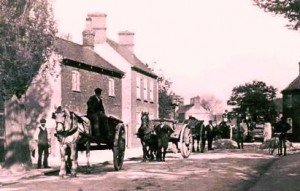 (N.B. The Great Northern and Great Eastern Joint Railway was established in 1879, and the joint company built a line between Spalding and Lincoln to complete a new, primarily freight, route between Cambridge and Doncastor, a distance of about 123 miles [198 kms.]. The main purpose was to move Yorkshire coal into East Anglia. Park Drain was a railway station in Nottinghamshire, close to the border with Lincolnshire.)

William’s parents remained in the village for the rest of their lives. His father, John William, died March 1949, aged 77, and Louisa was 91 when she died in June 1961. They now lie together in Ruskington Cemetery, New Plot, North Border, Grave 57.

According to ‘The Lincolnshire Chronicle’ [27 November 1915] William went into training as a wireless operator in September 1914 and “… on gaining his certificate went into service on HMS Astor. ” His Service Papers show William enrolled in the R.N.R. on 3 October 1914 and he was promoted to ” W/T Operator 1st Class ” on 23 October 1914. It was on this date that William was posted to the Yacht “Aster”.

On 20 May 1915 William returned to HMS Victory, a shore establishment, before being posted to HMY Zaida on 14 June 1916. HMY Zaida was hired by the Royal Navy as a Patrol vessel on 26 May 1916. She was recorded as operating as a “Tender to HMS Hannibal” and was owned by The Earl of Rosbery.

There are 2 differing versions of the fate of H.M.Y.”Zaida”. She was built in 1900 and was a 350 ton Patrol Yacht. The British version is that she was sunk by a German submarine U35 in the Gulf of Alexandretta but the Turkish version is that she was sunk by Ottoman shore batteries. According to German records U35 was operating off Malta in August 1916 and could not, therefore, have been involved in Turkish waters.

According to ‘Jane’s Fighting Ships of World War One‘ she was sunk on 17 August 1916 by ” .. gunfire from German submarine U35 in the Eastern Mediterranean. ”  (Gulf of Alexandretta) Another source has her hitting a mine in the Gulf.

Whatever the cause 3 Officers and 10 ratings and M.M.R. (Mercantile Marine Reserve) were lost. A further Officer, 1 rating, and 3 MMR died while prisoners of war. CWGC Records show that the 7 M.M.R. men are commemorated on the Plymouth Naval Memorial, whilst 2 of the R.N.R. men are on the Portsmouth Naval Memorial and the other 4 are remembered on the Chatham Memorial.

The “Amman Valley Chronicle” [31 August 1916] reported: “… four officers and nineteen men of her crew have been taken prisoners, but there is no information as to the fate of the remainder of the crew – two Officers and eight men – and it must be assumed that they are lost.  .. “. Similarly, the “South Wales Weekly Post” [2 September 1916] reported that the armed Yacht Zaida: “… had been destroying petrol stores, etc. has been reported as being considerably overdue. ”

Those taken prisoner included the Commander, Samuel R. Crabtree, who died in captivity on 30 September 1916. William was also one of those that became a prisoner of war. 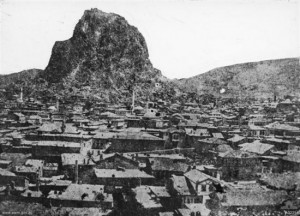 In September 1916 the American Ambassador in Constantinople officially confirmed that William was a prisoner of war.

Initially William, and presumably the other p.o.w.’s, were interred at the Camp at Afion Kara Hissar, a large prison camp was located in the city of Afion Karahissar, in the Vilayet of Brusa in Anatolia, he was transferred to Angora (old name for Ankara) on 2 October 1916.

William died 25 November 1916 ” from Tuberculous Enteritis whilst interred as a Prisoner of War at Angora, Turkey. ” [Service papers]

William’s: ” Grave Not Identified ” and he was originally commemorated on Angora Memorial 183. [Angora was the old name for Ankara until 1930. On this memorial were the names of those prisoners whose graves were not identified.]

As well as Cmdr. Crabtree and William, two other members of the crew died in captivity and are commemorated on the same Memorial – Steward Arthur E. Flower (15 November 1916) and Assistant Steward Robert Arthur Harrad, died two days later.